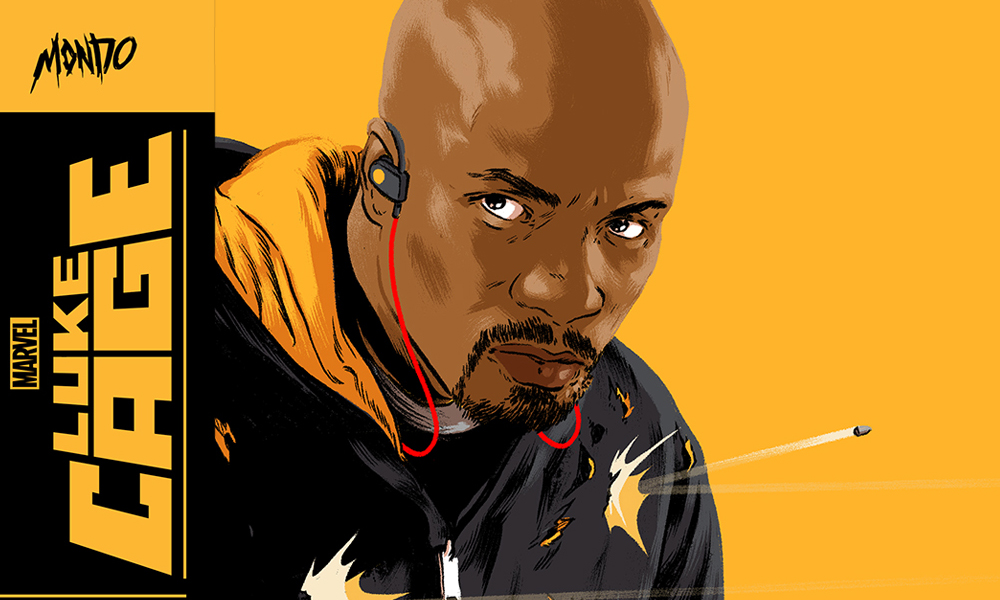 Marvel’s Luke Cage has set a new precedent for Marvel’s TV division. One aspect of the series that truly stands out is the score. If you love it, as much as I do, fear not, the soundtrack is coming. MONDO will release a vinyl collection of Adrian Younge and Ali Shaheed Muhammad music with art by Matthew Woodson. Check out the full details below!

Press Release: Mondo is excited to unveil the soundtrack for Marvel’s Luke Cage with collectible artwork of the bulletproof hero by Matthew Woodson. Composers Adrian Younge (Something About April) and Ali Shaheed Muhammad (A Tribe Called Quest) have combined forces to produce one of the best scores of 2016 featuring an inspired, genre-bending blend of orchestral score and 90s hip-hop beats, filtered through the sonic lens of the works of Ennio Morricone.

It’s no surprise that the score hovers in the same terrain of the Spaghetti Western soundtracks of Morricone – the narrative of Luke Cage plays out like a modern Western, only set in Harlem. Younge and Muhammad have meticulously crafted one of the most unique sonic landscapes in the history of television.
“We sought to create a score that reflects the world of Luke Cage. We see this world as a place where classic cinema meets classic Hip Hop,” said composers Adrian Younge and Ali Shaheed Muhammad.

Original Soundtrack 2XLP
Original Score by Adrian Younge and Ali Shaheed Muhammad Artwork by Matthew Woodson
Pressed on 180 Gram “Power Man Yellow” Colored Vinyl Pre-order begins October 7th
$35
In Los Angles, a live 40-piece orchestra will perform music from the Netflix original series on October 6th at the theater at the Ace Hotel, curated by Younge and Muhammad. Tickets for Marvel’s Luke Cage: The Live Score can be found ataxs.com.
Marvel’s Luke Cage tells the story of Luke Cage (Mike Colter), a hoodie- wearing, unbreakable ex-con who fights to clear his name and save his neighborhood. After a sabotaged experiment leaves him with super strength and unbreakable skin, Luke Cage becomes a fugitive trying to rebuild his life in modern day Harlem, New York City. But he is soon pulled out of the shadows and must fight a battle for the heart of his city – forcing him to confront a past he had tried to bury. Marvel’s Luke Cage is rated TV-MA and is streaming now only on Netflix.
Marvel’s Luke Cage Original Soundtrack Album will be available at digital retailers and streaming services on October 7. For more information, stay tuned to Marvel.com,@MarvelMusicInc on Twitter, and the official site for Marvel’s Luke Cage for all the updates.
Visit the Mondo official site & social handles for more information:
MondoTees.com
Twitter.com/MondoNews
Facebook.com/MondoTees
Instagram.com/MondoTees
Our Score