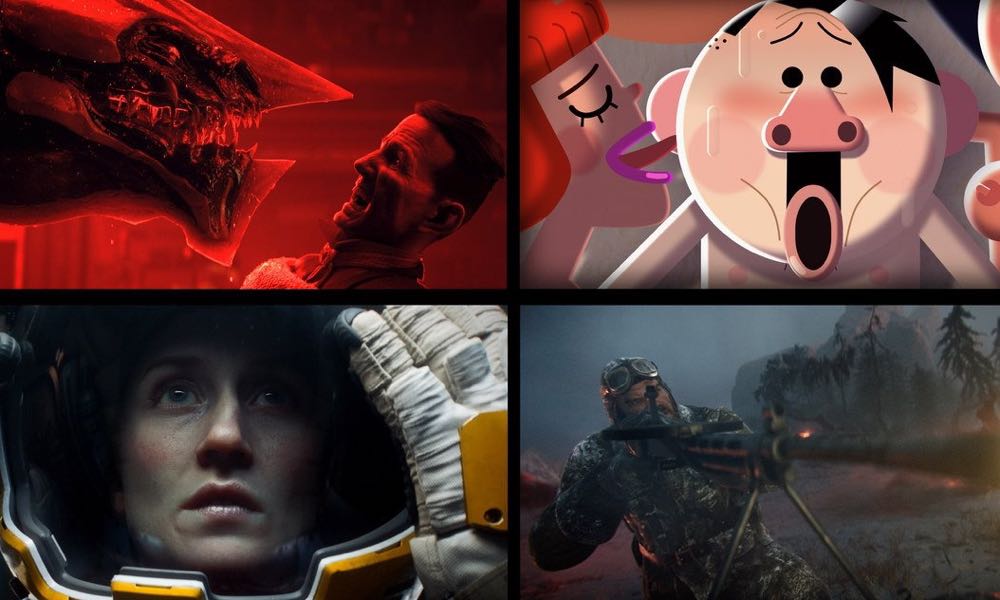 Ready for cartoons on the cutting edge? Based on an idea reminiscent of The Animatrix, the new Netflix animated anthology series features some out there material. Sentient dairy products, werewolf soldiers, robots gone wild, garbage monsters, cyborg bounty hunters, alien spiders and blood-thirsty demons from hell – all converge in eighteen NSFW animated stories. They get presented by Tim Miller & David Fincher.

Love, Death & Robots is an anthological series of short episodes between 5 and 15 minutes each, each using a different animation style to tell stories within the realms of sci-fi, fantasy, horror, and comedy. Despite a lot of fun, wacky premises in these episodes like the Hitler one, the trailer and overall tone of the collection as a whole feels just like The Animatrix, the anthological collection of animated shorts connected to the Matrix universe. Many of them are serious in tone, and some even include nudity and other sexual themes.

If you love science fiction and good-quality well-done animation like me, then it sounds like Netflix will soon have what we crave. This very cool sounding and looking project from Tim Miller (Deadpool) and David Fincher (Mindhunter) in the form of Love, Death & Robots, an animated anthology series. Love, Death, and Robots sounds like my kind of series.

This series is the result of a global effort, and the shorts will span the genres, from science fiction and fantasy to horror and comedy, while also presenting a variety of animation formats, from traditional 2D to photo-real 3D CGI. Each segment will be 5-15 minutes long and is aimed at adults and get created by different teams of filmmakers from around the world.

Miller sums it up like this: “Love, Death & Robots is my dream project; it combines my love of animation and amazing stories. Midnight movies, comics, books and magazines of fantastic fiction have inspired me for decades, but they were relegated to the fringe culture of geeks and nerds of which I was a part. I’m so fucking excited that the creative landscape has finally changed enough for adult-themed animation to become part of a larger cultural conversation.”

The eighteen episodes are meant to be provocative material designed to provoke an emotional response with differing stories that seem like they may be pushing the boundaries of what we traditionally think of for animation, which is a long time coming. And, as a global initiative, the diversity of voices and experiences creating the work should be exciting and perhaps even challenging for some individuals.