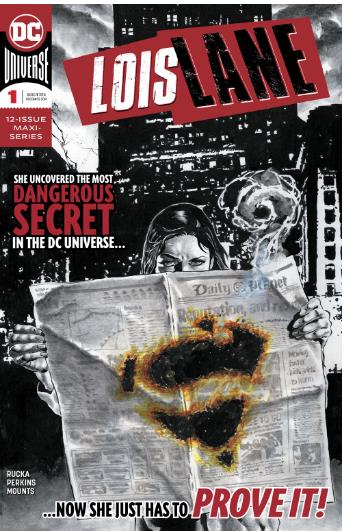 Whilst Greg Rucka may well have been right in his assertion that “Lois Lane is the best investigative reporter in the DC [Universe]”, his opening narrative for this “twelve-issue max-series” arguably demonstrates that this fact alone doesn’t necessarily mean a conversation-heavy yarn focusing upon the award-winning journalist is going to prove an enthralling experience. Indeed, if anything, the San Francisco-born writer’s script for “Enemy Of The People” simply demonstrates the dialogue-driven monotony of the news correspondent’s life, as she ensures her apartment continually has a well-stocked mini-bar, feverishly types an article packed full of spelling mistakes, dispatches a hireling to do the real ‘dirty work’ and is then finally ousted from Pennsylvania Avenue by the White House Spokesperson for implicating the administration have been “monetizing the separation of children from their families”…

Such a relentless barrage of well-populated word balloons, political statements, and manifestations of the Freedom of the Press really does make it hard to wade through this periodical’s twenty-pages, especially when even the sudden appearance of the titular character’s husband, Clark Kent, disappointingly leads to nothing more than a somewhat steamy shower scene and an awkward breakfast tête-à-tête where Lane disconcertingly defends her stance that their ‘successful’ marriage is built upon her being able to keep dark secrets from her spouse; “We’ve got a good thing, Clark, and it’s not because we’re relentlessly honest with one another. You know if I’m keeping something from you, I’ve got a reason.”

Fortunately, the three-time Eisner Award winner does manager to capture the readers’ attention momentarily, when his story’s viewpoint turns to Moscow and the Question’s brutal beating of three Russian ne’er-do-wells who were clearly responsible for the murder of Mariska Voronova. Staged whilst the criminal trio are struggling to locate their victim’s hidden stash of evidence, which has been buried amidst a diorama of statues, this action sequence finally imbues the publication with some semblance of energetic life, and debatably marks out the featureless “adherent of objectivism” as someone whose comic book exploits are far more interesting to follow than Lois’s.

Similarly as successful as the Pseudonym-mask wearing vigilante’s all-too brief pulse-pounding appearance are Mike Perkins’ storyboards, which competently demonstrate the British artist’s mantra of always relishing “portraying that real world in the comics I illustrate as much as the super heroics.” Well-detailed, and vibrantly colored by Paul Mounts, it is just a pity so many of his panels are crammed full of supercilious, fairly suffocating conversations.