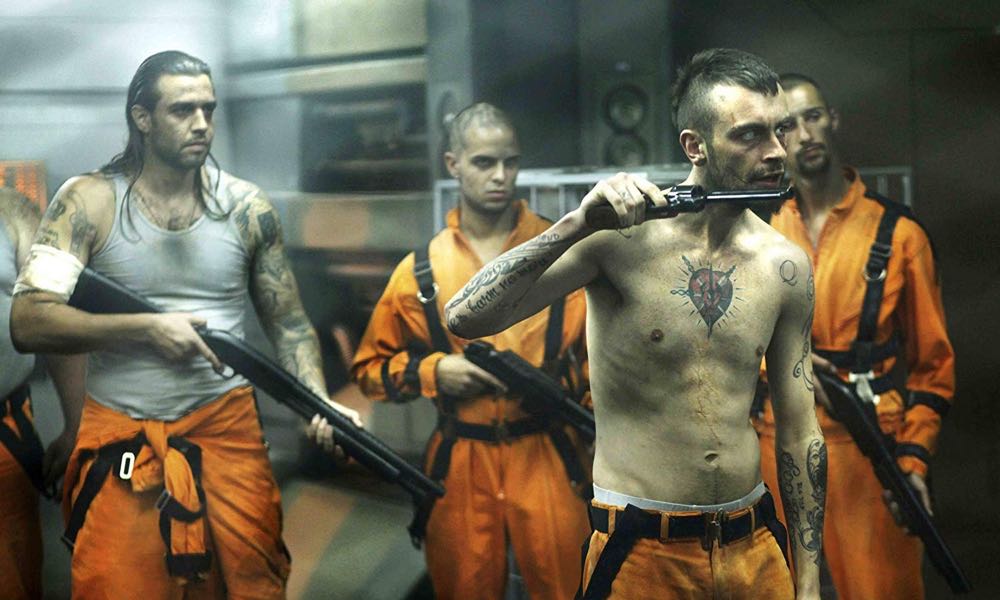 One of the main features of Lockout is the film’s depiction of an outer-space prison, which, as it turns out, is not as exciting as you might think. Our first look a the space station that houses the place is less than spectacular and somewhat anticlimactic. Once inside the site, it becomes more or less a standard science fiction movie trope we have seen many times before. This generic location represents a missed opportunity. Nothing much gets done to make this place more exciting or uniquely appealing visually or otherwise.

Depictions of prisons, futuristic, and otherwise, in science fiction, are not difficult to find. Films like Alien 3 (1992), Demolition Man (1992), Fortress (1993), G.I. Joe: The Rise Of Cobra (2009), and Minority Report (2002), along with others, have pretty thoroughly explored the subject. I always liked How Men In Black 3 (2012) depicted that prison on the moon scene, and of course no list on the topic would be complete without the grand-daddy of sci-fi prison-break movies, John Carpenter’s classic Escape From New York (1980), which may have served as inspiration for Lockout.

After revisiting Lockout the other night, it soon became apparent, this film’s narrative is an almost exact duplicate of the one from Escape From New York. The film’s creators simply transported the story into outer space. Somehow, either consciously or unconsciously, Lockout’s writers copied the story from the  John Carpenter classic, making it nearly impossible not to compare the two films; they are that similar to teach other. It turns out I am not the only one that noticed the striking similarities between the two films. A French court has ruled the film plagiarises the plot of the cult classic Escape from New York and its sequel, Escape from L.A.. Framed in that perspective, watching Lockout seems more like watching a French tribute to that earlier film meant for French sensibilities, instead of something fresh and new with an identity of its own. In a face to face comparison between the two films, Lockout loses in every regard.

Lockout features Guy Pearce as its latter-day surrogate Snake Pliskin, and Pearce works hard to make his character appealing. However, choices made by the film’s creators result in readily noticeable differences that do not help to improve the movie. Instead of the badass man of few words, this time around, we get an overly talkative, wisecracking merc whose stream of comments are intended to be amusing. This choice for its lead protagonist changes the tone of the entire movie into something more in the direction of a lighthearted adventure instead of a serious drama in the same way the James Bond movies did for a while.

In case you are not familiar with the title, Lockout (also known as MS One: Maximum Security) is a 2012 French science fiction action film directed by James Mather and Stephen Saint Leger and written by Mather, Saint Leger, and Luc Besson. It is both Mather and Saint Leger’s feature directorial debuts. The film stars Guy Pearce, Maggie Grace, Vincent Regan, Joseph Gilgun, Lennie James, and Peter Stormare. The film’s plot follows Marion Snow (Pearce), a man framed for a crime he did not commit. Snow, who gets offered his freedom in exchange for rescuing the President’s daughter Emilie (Grace) from the orbital prison MS One after the prison gets taken over by its inmates. The escape gets led by Alex (Regan) and his psychotic brother Hydell (Gilgun).

One of the film’s highlights is Gilgun’s over-the-top portrayal of Hydell, a crazed homicidal maniac. Lockout fails to conjure much excitement along the way. There’s not much else that recommends this film that wraps up with what is basically a fairy tale ending.