LATEST
Home Movies Features Limitless (2011): It’s All In Your Mind 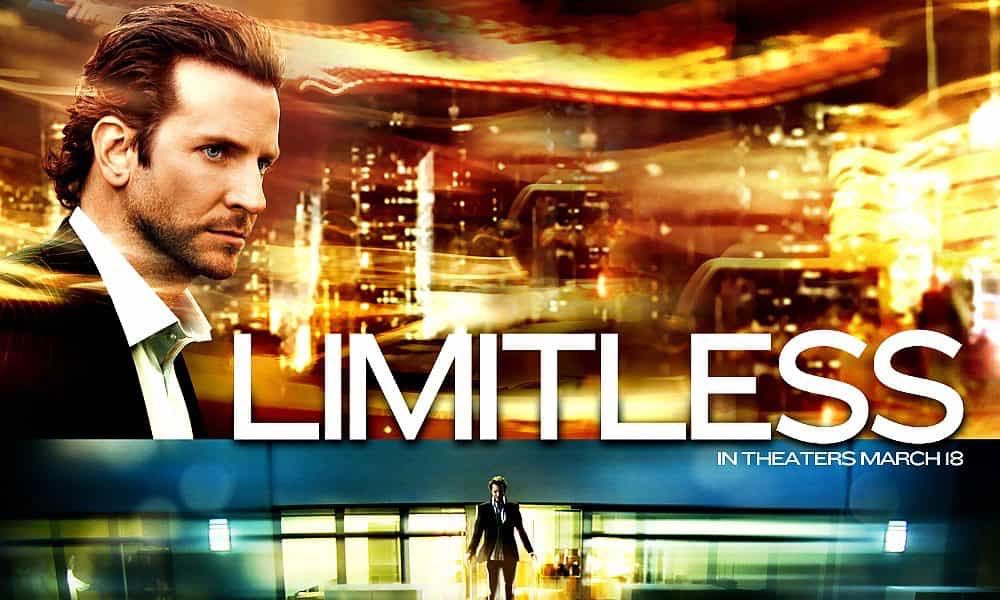 The lyrics to the hit song by Huey Lewis And The News above almost seem like they got written about NZT, the McGuffin in drug form that drives the plot of Limitless.

Revisiting Limitless the other night reminded me what an excellent job the cast does selling this story, especially Bradley Cooper, who practically carries the entire film on his back. This film, with a classic science plot, presents itself as a crime drama complete with the traditional narration by the lead protagonist. Right around the middle of the film, it even halfheartedly tries to sell itself as a caution against drug use. Limitless, at its heart, is not that complex a  film to decipher, Its a fairy tale for men, a cinderella story with some crime drama elements to help keep it entertaining for its intended audience. This film’s narrative is about the universal desire men have to be the alpha male in every situation and the fantasy of having an easy way to achieve that goal. This competitive nature is part of our DNA and anthropology, and a big part of what makes us human. I mean, who doesn’t want to be the smartest, coolest guy in the room without fail? This is the same stuff that led to the creation of fantasy characters like James Bond, intelligent, capable, sophisticated,  and chill under pressure in a confident masculine manner. That’s what this movie is about; everything else is window dressing.

That doesn’t make it a bad film; Limitless is an entertaining, stylishly directed, thoroughly enjoyable genre film that happens to touch on one of my favorite areas of science fiction thought. I have been fascinated for a long time by stories that explore ideas relating to the full potential of the human mind. Luc Besson’s Lucy was a fun exploration of the topic that had more cosmic inclinations about our connection to the universe that includes phenomena like telepathy and telekinesis. Limitless, on the other hand, makes a more pragmatic, down-to-earth exploration of the topic that nevertheless contains some exciting ideas.

Not familiar with the title? Limitless is a 2011 American science fiction thriller film directed by Neil Burger and written by Leslie Dixon. Based on the 2001 novel The Dark Fields by Alan Glynn, the film stars Bradley Cooper, Abbie Cornish, Robert De Niro, Andrew Howard, and Anna Friel. The film follows Edward Morra, a struggling writer. He gets introduced to a nootropic drug called NZT-48, which gives him the ability to utilize his full brain potential and vastly improve his lifestyle. A television series of the same name, covering events that take place after the film, debuted on September 22, 2015, but was canceled after one season.

Limitless has as its main protagonist, one Edward Morra. An aspiring writer who is easily relatable. The film works to establish David as a classic underdog loser before transforming him into a mental superman. When we first meet Edward, he’s introduced as a guy that drinks too much, but that can’t admit to himself he has a problem. Edward’s not a bad guy; he’s a man with slightly above average intelligence that made some bad decisions at crucial points that led to his life becoming a wreck. Its when fate intervenes in the form of a chance encounter with his ex-wife’s drug-dealing brother that the fairy tale gets underway. Fate, it seems, has plans for David in the shape of a drug called NZT.

The film follows Edward’s drug-fueled odyssey, the main ingredient of this movie. His experiences result from taking NZT, the fictional super-drug the film creates that becomes the plot’s McGuffin. This drug is the pill we all wish for when we need that extra boost to our ability to think on our feet and do or say just the right thing. Like the song lyrics above suggest, it doesn’t mess with your ability to function but instead actually enhances your mental acuity and heightens the senses while removing any baggage that could hinder your ability to do whatever. Things like shyness and awkwardness get wiped away, leaving only a  super focussed intellect. NTZ provides the user with profound mental clarity and perception; it apparently also endows one with the ability to see beyond the veil and understand the patterns and connections between all things. Did I mention it can make you rich and bestow you with lots of power? This super drug takes every piece of information you have ever gotten exposed to and endows the user with an ability to synthesize that information and transform it into useful knowledge. Or, put simply, it turns you into the ultimate smartass that can speak any language, win at any game, get any woman you want, and even master music and martial arts. As I said, this film’s narrative is a fairy tale for men who dream about achieving their full potential.

We find out later that using NTZ is not without its drawbacks and that using the stuff can eventually prove fatal, except for Edward, who is immune to its deadly effects. This is a fairy tale, remember?