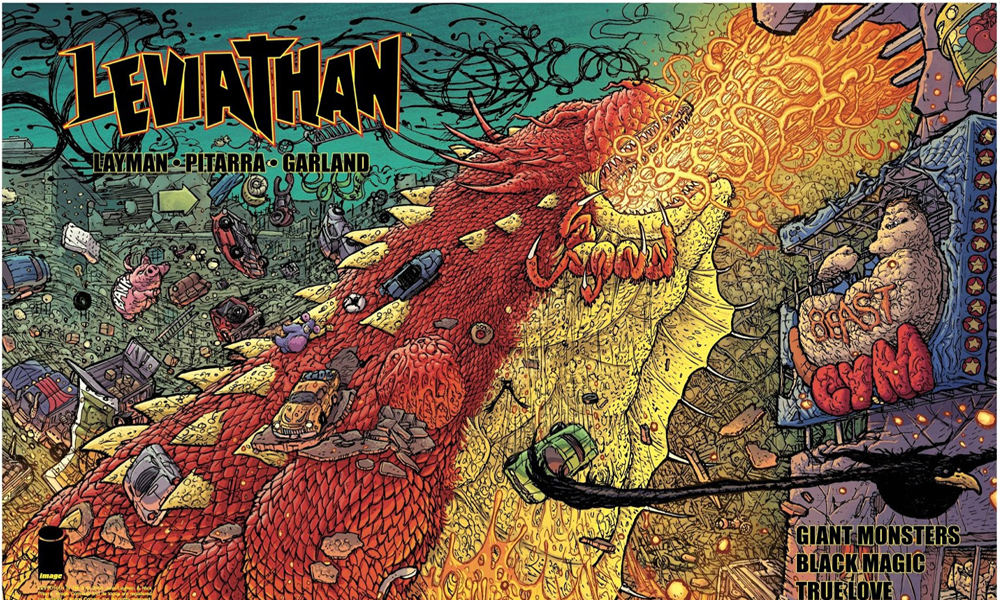 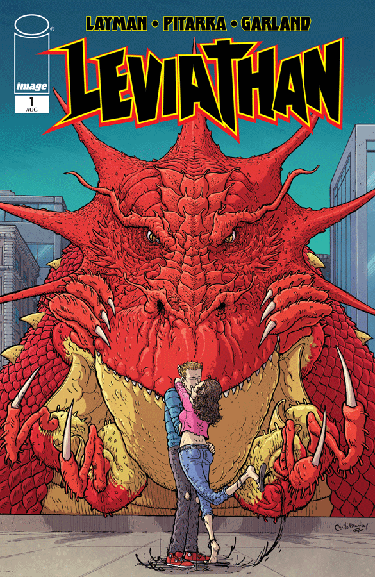 “upcoming American monster film Godzilla: King of the Monsters”, John Layman’s narrative for Issue One of “Leviathan” undeniably delivers upon the creative team’s desire to produce “a wild ride” which guarantees to “grab you by the throat and throttle you with insane nonstop action until your brains dribble out your ears.” Yet whilst such a statement certainly isn’t an “exaggeration or hyperbole”, it also means that this twenty-page periodical is disappointingly short on plot and disconcertingly strong with its expletives.

Indeed, despite being “Rated M/Mature”, tactically advertised in the tiniest of fonts possible at the back of the book beneath its bar code, this opening instalment to “Til Death Do Us Part” seems to promote colourful metaphors and truly gratuitous violence over enthralling story-telling with every scene it can muster, even taking the opportunity to display an entirely nude Donald Trump lounging upon a leopard-skin rug during a brief, albeit truly disturbing, “interlude” featuring the President of the United States in his bedroom at the White House; “We’re under attack! We’ve been preparing for the worst, and the worst is here! It’s a dinosaur. And the President is very concerned we get this under control — ASAP!”

Of course for those readers who enjoy endless drawings of people being mutilated by a tower-block tall red dragon then Nick Pitarra’s pencilling probably provides plenty of enjoyable panels, with his quirky sketches depicting a Pulitzer Prize aspiring news helicopter being frazzled alive by the giant creature’s fiery breath, and the rather rotund Ellie Crabtree getting squashed flat by one of the monster’s clawed feet. However for those bibliophiles who expected a little more than simply watching a haplessly curious Alexander and J.K. getting eaten whole, along with their building’s roof, the all too brief love story about Vivian and Ryan probably didn’t keep their attention for all that long, especially when a couple of bricks to the head seemingly robs the lanky Romeo of his lifelong sweetheart.

In fact, apart from the endless killing as a result of Goth Jimmy’s summoning ceremony and the American artist’s phenomenal attention to colourful detail, this comic’s entire contents seems to solely focus upon removing as many of the central protagonist’s friends as possible, even “his buddy Johnny Burns”, who inexplicably deserts Deluca just as soon as the “flushed goldfish” appears to ransack their entire city simply because the “black guy always dies first in the horror movie”..? This bizarre narrative may well have made Layman and Pitarra “happy and grateful”, but disappointingly pales in comparison to the far more interesting monster designs, as well as “the process of putting the book together”, which is to be found at the very back of the publication.