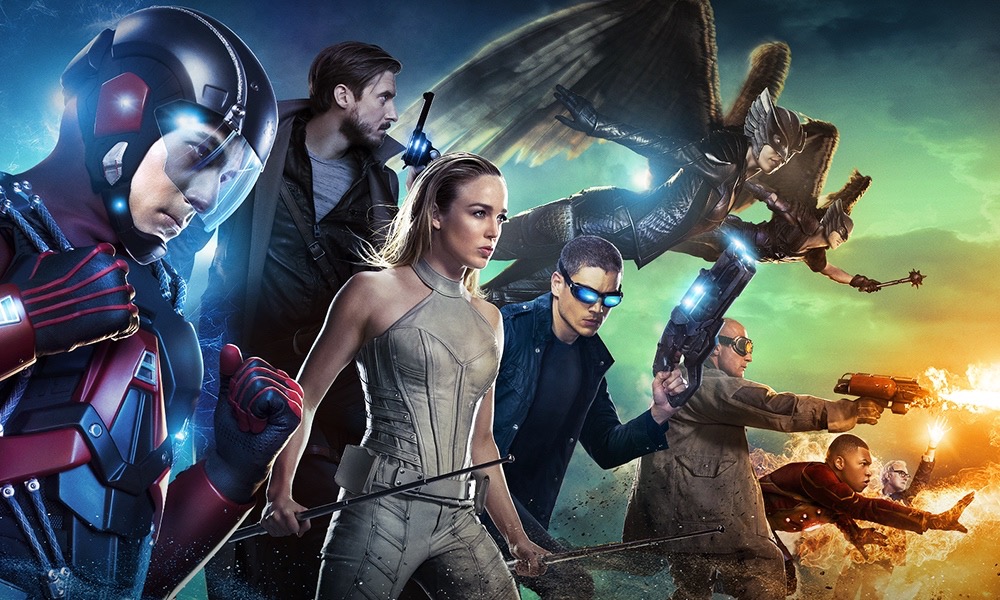 What do you do for a new series that needs a helping hand getting off the ground? You bring in elements from another series that has already proven itself to be a hit with fans.

In the events depicted following the team crash landing in the future after once again being attacked by Chronos in the last episode, this episode of Legends got a helping hand in the form of an appearance by Green Arrow, in fact by two Green Arrows.

Portraying one possible future of Star City that might exist if our band of heroes should fail in their mission, it makes use of some classic Green Arrow mythology and depicts a future where Oliver Queen is presumed dead and has been replaced by the son of John Diggle, who calls himself Conner Hawke. The Star City of the future our heroes find themselves in is all but destroyed, and resembles a war zone occupied by biker style gangs of hedonistic youths, ruled over by the son of no other than Slade Wilson, named Grant Wilson, who arrived with an army years earlier, and took over the city as a latter-day warlord.

Centered around Hawke and Oliver this episode has more appeal than the others that preceded it and is a pretty well-written episode that delves into some of the DC mythology that has been created surrounding the archer. Oliver, it turns out, is not dead but is discovered by Hunter and Sara, as they search for parts to repair the Waverider. He is still alive, but missing his left arm, and even worse, appears to have a broken spirit. An unused bionic arm is shown at his former hideout where he is found, and Oliver is shown with a grey-white full beard having noticeably aged, and hiding in the shadows of his former headquarters.

This episode has a theme running through it about being the alpha male in a couple of the episode’s subplots also. When Rory and Snart are confronted by a gang of junior hoodlums Rory takes out their leader and replaces him as the head the group, only later to find he’s not the true boss in town when he is upstaged by the arrival of Wilson who takes charge of his new group of followers and puts them to work for him.

There is also a somewhat silly competition depicted between Palmer and Jax for the affections of  Kendra who responds to Palmer’s display of interest in her as having no interest in making her life more complicated at this point by romance.

There are several obligatory fight scenes, of course, culminating in Oliver’s reappearance as Green Arrow complete with a bionic arm. he and Hawke manage to take down Wilson between them in a climactic battle that takes place just as Wilson is about to execute Sara who his minions have captured. This is a pretty epic battle that takes place in a public area set aside for the occasion. The rest of the team shows up in the form of Snark, and Rory, followed by some air support from Palmer as the Atom, and Kendra as Hawkgirl. This turns the tide of battle and the team leaves to return to their ship and leave the grim city of the future.

The episode has some interesting developments regarding the relationship of Snark and Rory. When Snark knocks out his partner who was not completely in favor of leaving, it sets up some tension between the two criminals, continuing the theme of the competition for the role of the alpha male between the two. This shows signs the rapport between the two might not be as simple as previously portrayed. It is implied that his actions could come back to haunt Snark later and that his arrogance might lead to his downfall.

Overall I enjoyed this episode more than any of the others so far in this series, but what does it say about this show that it needed a hand-up from Green Arrow to elevate it to a more enjoyable level of entertainment?

There were still elements of this show that I find are becoming tiresome and annoying. the constant bickering for one is simply a time-consuming device that I feel is quickly being worn out. I look forward to when this team is portrayed as working in unison and being more often portrayed as the team depicted in this episode’s climatic final battle, a well oiled and efficient fighting machine. Also, I am beginning to suspect my problem with this show lies in the cast as well as the poor writing that has plagued the series so far. I expected to warm up to some of these people more than I have by now. I would just like to have the show make me more enthused and eager to see the next episodes than it has done so far. [review]