All of this made sense to someone…or at least you hope it did.
It’s all dedicated to the cousin of the director and writer so this is a labor of love, if not entirely of logic.
Money, time, effort and talent compose Landing Lake from an atmospheric score to some nice little character beats, subtle special effects, and a moody directing style. The central conceit, however, is nearly indecipherable. 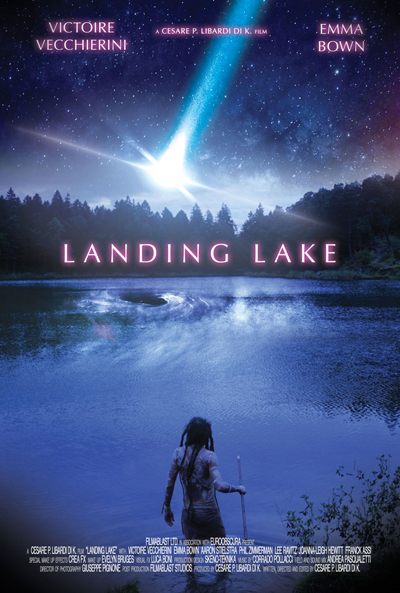 Around the time when horrific events begin to occur and people barely react to them you begin to wonder if the entire production is some kind of recorded dream. Then the science fiction elements come out to play, and it’s all but confirmed the surrealistic elements are less an intentional motif and more of an issue with a greatly confused script.

As a sensory experience, Landing Lake has something to offer in terms of sheer weirdness. but it takes a long time to get to the crazy and during that time a lot doesn’t happen. The initial cast is fairly typically bickering, broken working stiffs who claim to be professionals despite most of them being incredibly young. When they encounter a crashed plane a couple new characters are added to the lineup, and these are even more unhinged and abrasive.

For some much animosity there’s the expected regulation number of fist fights and shouting matches every horror film must have apparently, but as mentioned above something very odd happens whenever anyone encounters something beyond the ordinary, deadly, or unexplained. They either ignore it, react very restrainedly, or forget about it in a couple of scenes apart from describing how things are generally ‘going badly’.

Maybe the intention was to have the character seem to be in a trance or possessed or…something. This is the major caveat to experiencing Landing Lake as something more than an experiment. For a bit of the film it seems like events are going somewhere. Some characters pair up and talk about their pasts. Some postulations are made about why wacky things keep happening in the wilderness.

But then it takes a left turn and tumbles into complete obscurity, comprehensible perhaps only by the author and director. Some people enjoy the challenge of intentionally ambiguous cinema, but those people might take issue with the initially cliched scenario of griping teens getting lost in the woods.
There’s some interesting imagery and especially sound design going on here, but I stumbled out of Landing Lake without understanding what I’d seen except in a general way, and unfortunately with no great impulse to revisit the slow born madness.