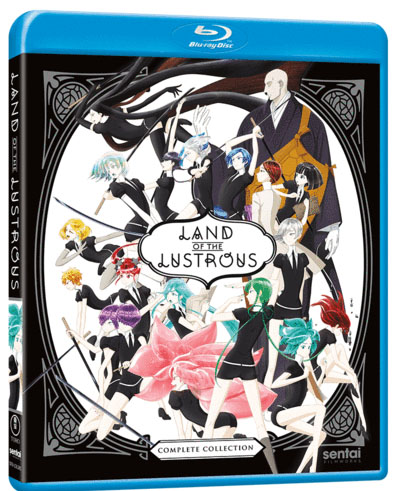 Land of the Lustrous is a 2017, twelve episode anime series based on Haruko Ichikawa’s manga of the same name. The series won numerous awards and praise for its visuals from Studio Orange which utilize CG animation as a base with traditional 2D animation to complement the look.

The Lustrous are an immortal race of humanoids whose bodies are composed of organic gemstones. Their bodies and be broken to pieces but reassembled although if any fragments are missing they could permanently lose certain memories. The Lustrous are under constant attack by the Lunarians, who seek to harvest the gems from their bodies to fashion into decoration. The 28 members of the Lustrous are led by their Sensei, Master Kongo, A powerful monk who oversees the jewel people and acts as a teacher to them.

Master Kongo also assigns tasks to the Lustrous and it is here where we meet Phos (short for Phosphophyllite), the youngest and weakest of all her people. Her frailty leaves her unfit to be a fighter or handle other strenuous tasks. Her weakness and penchant for getting into trouble brings ridicule from others among the Lustrous. Master Kongo assigns Phos to create an encyclopedia history of the Lustrous.

This task will soon sweep Phos into a storyline which introduces the rest of the Lustrous including Cinnabar, whose body is cursed with a toxic poising, leaving it to live a solitary existence and avoiding contact with all others. Bort is the most powerful among several diamond class Lustrous, who rescues Diamond (a lower level diamond class) and Phos during a Lunarian attack.

An encounter with a giant, snail-like creature leads Phos to discover more about the history of the various races who populate the world. Over the course of the series Phos not only discovers the secrets to Lustrous and Lunarians but her own hidden potential abilities.

Land of the Lustrous is unlike any other anime I’ve seen, frankly. Its unique visuals, complex storyline and well-developed characters draw you in immediately. While the Lustrous all appear as younger, teenaged-looking females, and Master Kongo definitely appears male, the series use non-gender specific pronouns such as “they” and “them” as opposed to “he” or “her”. This isn’t done for any PC reason but rather to establish the Lustrous as unique race in which traditional genders don’t exist.

Although it is only 12 episodes, each running approximately 25 minutes in length, it’s amazing how much story and character development is packed into the series. Each of the main characters stands out with their unique personalities, abilities, and appearances. The visuals are truly stunning. The use of CG with 2D captures the both the brilliance and translucency of characters who are made of gemstones.

The series features the original Japanese language with English or Spanish subtitles as well as both English and Spanish dubs.

The good folks at Sentai Filmworks have provided the readers of the SciFi Movie Cage and exclusive 10% off promo code.  Click the order link below and enter the code: SciFiMoviePage19