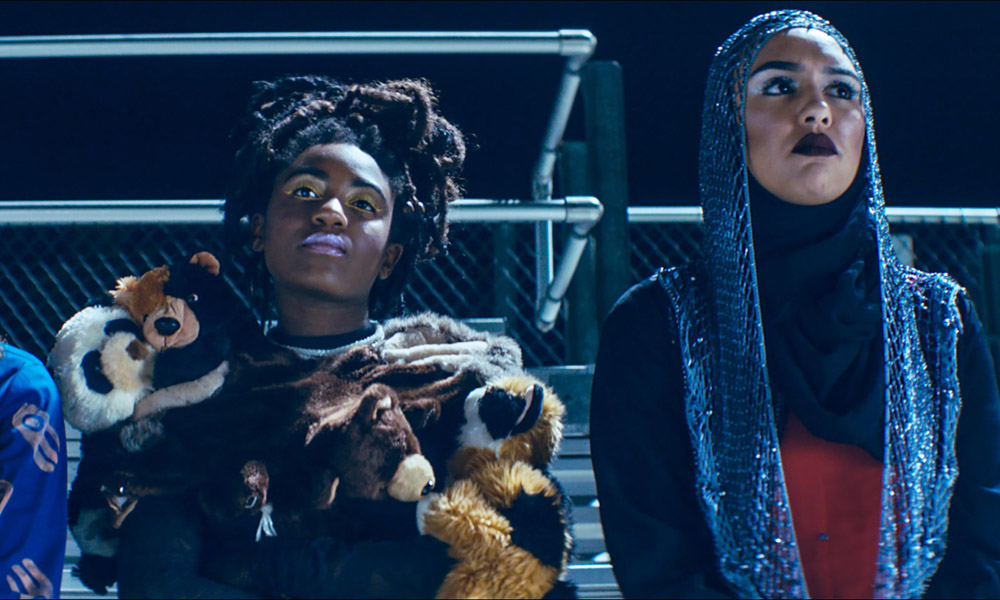 Some artists wear their influences on their sleeves. 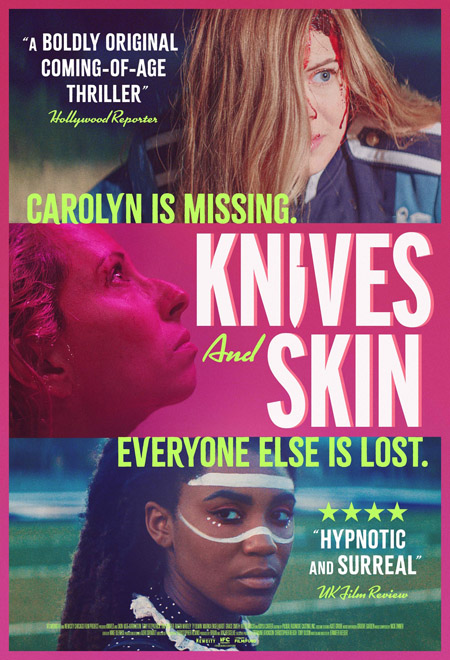 The creators of Knives and Skin not only barely conceal their inspiration from two famous productions in particular but the advertisers of the film and reviewers alike constantly harken back to the two big shadows this film lives beneath.

The show Twin Peaks and the indie darling Donnie Darko. If those two films met in a horrific transporter accident Knives and Skin is probably what would result. We’ve got almost asleep but talented actors mumbling cryptic dialogue. We’ve got teenaged and adult angst revolving around a disappeared young lady with ties to nearly everyone in a small town.

We’ve got warbling music, inexplicable seemingly supernatural occurrences, people in weird costumes, shifts between strangely archaic and innocent slang and shenanigans…on the heels of flat out R-rated swear words and themes.
The acting is staggeringly good. Apart from the honest emotion, how anyone let alone an entire cast could convincingly read through some of the most stilted, pretentious dialogue is the true wonder to behold here.
For all the dreamy lights, excellent performances, and refreshingly surreal atmosphere, it’s the tedious pacing and truly rancid writing that drag this promising feature into a slog.

I like surreal productions. I like great acting showcases with emotional dramatic situations to spur them. I like creative camera angles, magical realism, and atmospheric slow burn character investigations.
What I don’t like is on-the-nose statements and deliberately obscurantist warbling.
Nobody in this movie talks like a human. The scenarios are weird enough with confused family dynamics and off-putting behaviors, but the writer seems convinced that people speak exclusively in veiled and mysterious half-sentences. It gets wearisome when the constant prattle is either kids talking like they’re drugged robots or adults talking like they’re aliens.

“Make something move that’s not supposed to move on its own.” a teenager asks her magician father.
Um…nobody says things like this using this phrasing, especially a teen from supposedly a modern time period. The wording would be ‘Make something move’ or shorter. Literally the only reason the statement is formed so bizarrely is partially to add to a dreamlike atmosphere (which I found was broken by these awkward conversations, not improved by them) and also because this phrasing ties into a metaphorical cut-away to another unrelated event.
This happens SO MANY TIMES it became a crutch for Knives and Skin: riddle-like language which only makes sense cross-referenced to something else the characters speaking have no knowledge of. This is not an ideal way to make ironic analogues.

Here’s another gem: “We shoplifted matching angora sweaters: black with red hearts a teddy bear.”
This is supposedly someone whispering to a friend just before an assembly. No, this character is not supposed to be either on the spectrum, under the influence, or is particularly dramatic of personality. Yet the dialogue sounds like someone reading out a prepared monologue for a theater group.

Again, if it wasn’t for the stellar cast this would be laughable. It’s a testament to them this digestible at all.
But that’s what Knives and Skin felt like: choking down a meal that’s beautiful in presentation but tastes like cardboard. You keep believing that sticking it out will lead to something worth all the heartache, blubbering, cross-chatter, coarseness, disorientation.

It really doesn’t. Maybe that’s a theme here about life being strange, drawn out, ultimately only meaningful due to individual experience. But if that’s the case you can get the same experience in shorter order by just living day to day, not muddling through this maudlin fable.