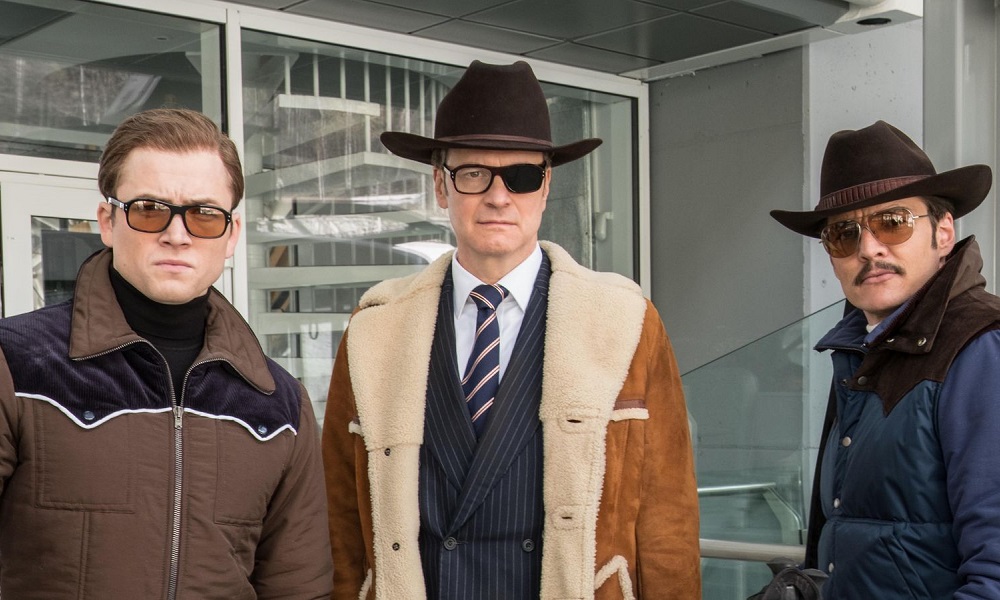 In the era of franchises, we’ve all become accustomed to sequels improving upon the original rather than signaling a slow, steady decline. It doesn’t always happen of course – Batman v. Superman is objectively worse than Man of Steel – and a number of Part 2s from eras gone by actively improve upon the original (Goldfinger, for example, or arguably The Empire Strikes Back.) But Kingsman: The Golden Circle definitely has the feeling of an older style of sequel. Having scored an unexpected success with the sheer audacity of the first film, director Matthew Vaughn delivers more of the same, with diminished (if still interesting) results.

The original Kingsman took the Roger Moore Bond films and hopped them up on mescaline: using superior art design and an arch tone to deliver a wholly surprising – and R-rated – superspy mash-up. It left very little room to expand, however – at least in terms of the big picture – though it did provide a template for tons of wacky/horrifying little details in this gadget-laden universe. Reveling in the minutia constitutes the film’s primary joys, while Taron Egerton’s Eggsy still makes an appealing hero and an increased role for his mentor Merlin (Mark Strong) goes down easy too.

As for villains, Vaughn finds someone able to match Samuel L. Jackson’s deranged tech guru from the first film in Poppy (Julianne Moore), the June-Cleaver-style ruler of the world’s largest drug cartel. She’s built a slice of small-town Americana in an ancient Cambodian temple, complete with abducted rock gods performing for her whim and robot dogs devouring anyone who takes her from her happy place. She’s smart enough to eliminate the Kingsman organization before launching her evil scheme –  a new way of doing the right thing for the wrong reasons – leaving Eggsy and Merlin on their own and in need of assistance. They turn to their American counterparts, the Statesmen: a denim-laced variation on the same superspy routine operating out of a Kentucky distillery turned high tech fortress and rocking the cowboy ensemble as hard as Eggsy rocks his Saville Row threads.

Channing Tatum fans be warned: he’s not in this much, nor are a slew of high profile stars who basically just stick to egregious cameos before disappearing and leaving the series stalwarts to do their thing.  They constitute the movie’s weakest segments and speak more to Vaughn’s reputation than a need for such high wattage. Similar problems occur when dealing with more mundane subplots like relationships and hanging with your mates even though you’ve got to periodically head off to save the world. The outrageous tone never works while idling in neutral, and though we need a little downtime to catch our collective breath, The Golden Circle indulges in too much dead air too often, especially considering its lengthy run time.

It makes up for lost ground in the set pieces and accompanying boost in energy, when Vaughn can really cut loose and the film approximates the same vibe that made its predecessor so much fun. The Golden Circle uses the same shock tactics as the first film too, trying to juice cultural pertinence out of periodic surprises. This doesn’t work as well, but that constituted a problem with the first film too. And, while gimmicky, they at least reflect the courage of Vaughn’s convictions… and indeed things might have felt a little less Kingsman-ish without them.

Had they released this film in the height of summer, it might have been doomed, and against superior fare like Wonder Woman or GotG2, it simply can’t compete. Here in September, however, mainstream movies pretty much begin and end with the scary clown, and those looking for something a little more upbeat have a reasonably entertaining option here. A third film might be too much – diminishing returns rarely reverse themselves – but this one still finds enough fuel to provide a few enjoyable flashes in the pan. We’re not going to push our luck on that front. This series would be well-advised to do the same.