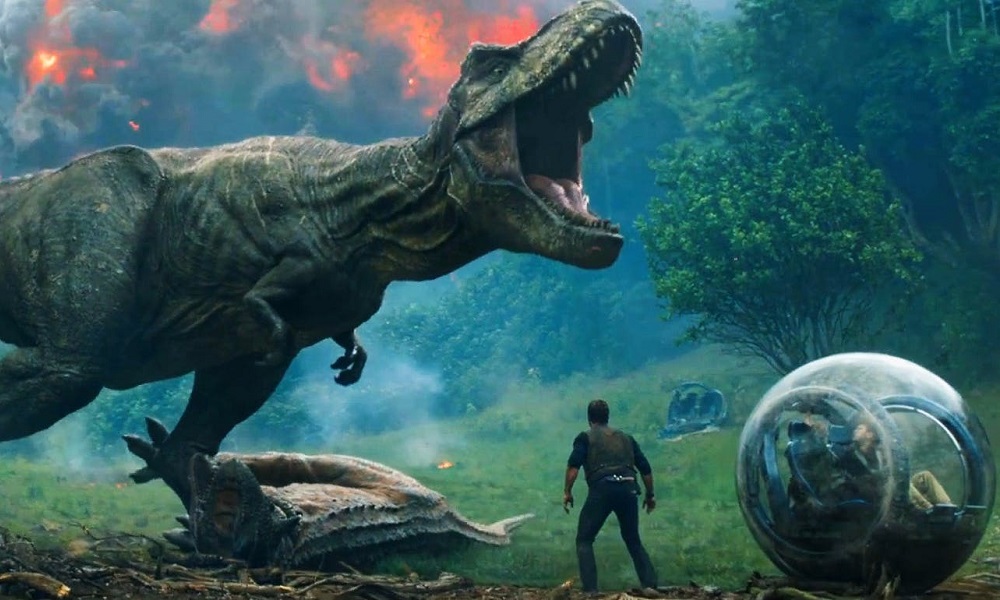 “Do you remember the first time you saw a dinosaur?” Claire Dearing (Bryce Dallas Howard) asks late in the running of Jurassic World: Fallen Kingdom. She refers to one of the money shots in the original Jurassic Park as the skeptical heroes stood amazed at the sight of a brachiosaurus walking blithely across their path.

We know this because Fallen Kingdom adopted an overt visual cue to the moment some 45 minutes earlier… only this time the brachiosaur is shrieking in lonely, forlorn agony at the end of a dock as it is engulfed in a pyroclastic cloud. The movie lingers on the creature’s pain, its horror, its loneliness and its inescapable death.  There was no purpose to this moment beyond shitting on the film’s forefathers and asking us to suffer for it. It’s a moment of wanton cruelty: emotion porn milking pathos and pain from the audience. Why? Because Fallen Kingdom has nothing else worth showing us.

Emboldened by the success of the dark (but infinitely superior) Jurassic World, the film’s producers hired Spanish director J.A. Bayona, who essentially turns it into a horror movie. In and of itself there’s nothing wrong with that – the fifth entry in any franchise could usually use a change of pace – but in the need to suddenly make things more Gothic, the basics of storytelling fail him utterly. Claire and her ex Owen (Chris Pratt) are lured back to Isla Nublar on the eve of a volcanic eruption in an effort to save at least some of the dinosaurs from permanent extinction. Naturally, bad guys get involved and before we know it, we end up in a creepy mansion in Northern California, with the prehistoric beasts filling in for the local ghosts.

There’s a strange charm to the notion, and Bayona obliges with a few strikingly composed images. That’s pretty much the end of the nice things to say about the film. Getting from Isla Nublar to the California coast requires skipping over plot holes big enough to swallow the whole pack of dinos in one go. At one point an entire ship full of villains overlooks the protagonists flying a truck straight into the cargo hold, then conveniently vanishes for a week or so while the heroes get their shit together.  The Fallacy of the Talking Killer strikes early and often, and new story threads are thrown in seemingly at random before being abandoned in favor of mindless noise.

The peril, too come largely through contrivance, from the volcano that erupts because reasons to random cyanide gas leaks threatening to poison dozens of animals trapped in cages. The threats either arrive as pure contrivance or are cribbed from earlier movies that pulled the same trick with infinitely more style. Bayona understands the mechanics of creating a scary scene, but lacks the emotional underpinning to give it any weight… requiring the human characters to either act like absolute morons or adhere to one-note personality traits in order to separate them from the scenry. The whole emotional tone of the movie feels badly misjudged, not only with the knee-jerk scares, but during the cringe-worthy attempts at levity.

These are serious flaws, though they might be more forgivable in other circumstances since the point of the exercise is basically to watch the dinosaurs run around and eat people. Dumb summer movies are nothing new. But the emotional tone beneath it all goes far beyond sloppy storytelling into something ugly and hateful and cruel.

It starts with the volcano eruption, the film’s set piece, as the heroes seek to outrun the lava in the midst of a stampede towards an ocean cliff. It’s a supposed roller coaster moment undone by the gut-wrenching sight of panicked, terrified beasts vainly fleeing a horrific fate.  Ironically, that proves the durability and effectiveness of the franchise’s main selling point: making us believe that dinosaurs are real. The Jurassic movies always imbued their CGI creations with real souls and earned an irresistible hook in the process.

Fallen Kingdom looks at those souls and decides to show us how much agony they can endure.  Dinosaurs killed by lava, tied down in cages, hit with cattle prods, shot, gassed, impaled and simply tortured in the manner a young psychopath might torture a puppy. In scene after agonizing scene. The film lingers lovingly on their pain: drawing it out as much as it can before moving us to the next exercise in misery. The fact that it hits us so hard speaks to the skills of the effects team. The fact that Bayona chooses to do that with their work is unforgivable. They may not be real, but the film asks us ot emotionally invest in them… then punishes us for trusting it.

The humans don’t miss out either, as Fallen Kingdom draws out their torment as long as humanly possible. That even extends to the film’s villains, whose expected fate involves shots of them flopping and shrieking – sometimes with severed limbs – solely for the purpose of making us squirm. These are supposedly the payoff sequences, while the bad guys finally get theirs. But the sight of them moaning and writhing while being noisily devoured robs it of even that base pleasure. The film commits the rookie horror movie mistake of equating suffering with fear. We the audience pay the price.

What remains is deeply unpleasant at  best: the shell of a normal corporate cash grab hiding a queasy center of flat-out sadism. The previous films never shied away from the red-of -tooth-and-claw realities of its subjects, but never to the pointlessly nasty ends that this one does. I’m sure it will make a mint and maybe the next one will be better. Hope springs eternal… even after an experience as bad as this one.