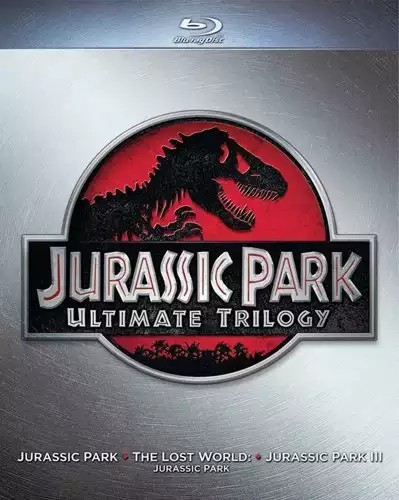 1993 constituted a banner year for Steven Spielberg, who released both his biggest moneymaker and greatest creative triumph within six months of each other.

The former – the dinosaur roller-coaster Jurassic Park – saw its accomplishments eclipsed by subsequent blockbusters, while the latter – the Holocaust drama Schindler’s List – has only risen in esteem and now stands as one of the most important movies ever made.

Yet in its own small way, Jurassic Park represented a watershed too. It stood poised between two seminal eras of special effects, as practical models and puppetry slowly gave way to CGI. Its release changed the way blockbusters were made, and its expert combination of multiple effects techniques grants it a durability that later films lack. The Blu-ray set gives viewers a chance to rediscover how much fun it can be.

The original Jurassic Park spawned two fair-to-middling sequels, both of which center around the same basic scenario as the first. A large company has cloned dinosaurs and set them up on a tropical island, hoping to exploit them for various profit-making purposes. Things don’t go as planned and various hapless visitors to the island need to stay clear of marauding carnivores before being rescued. The formula never deviates, nor does it need to.

With Spielberg at the helm of the first two and his protégé Joe Johnston at the third, they trundle out an agreeable series of chase scenes, money shots and general mayhem. Each one is thoroughly predictable, but also comfortable and entertaining with no pretense beyond giving us our money’s worth. A top-notch cast – including Sam Neill, Jeff Goldblum, Laura Dern and Julianne Moore – helps overcome the sketchy character development, and with the best special effects artists in the industry behind it all, the real purpose of the exercise always shines through.

The original film remains the best, of course, with the next two ranking as enjoyable junk food and nothing more. In the behind-the-scenes features, Spielberg cites it as a work of craftsmanship, and in those terms if no other, it may be his best. The visuals hold up extraordinarily well after 18 years, with expert techniques selling us on the notion that dinosaurs truly live and breathe. The film’s simplicity also prevents it from feeling unduly dated (save for the onscreen computers, for which there’s no help), and Spielberg’s sense of tension and suspense result in some terrific set pieces. Part of me hopes that he’ll direct a flat-out horror film someday, but until then, we have Jurassic Park to keep us warm.

The second and third films parlay the same formula into increasingly diminishing returns. Luckily, there’s still enough juice to help them retain some basic entertainment value and while you might forget them the instant the credits roll, you won’t regret popping them in the player for a viewing. Packaging them as a trilogy makes all kinds of sense; the sequels often feel like cool supplements rather than films of their own, and certainly benefit from appearing alongside their progenitor (for completion’s sake if nothing else).

The films’ standing in the annals of cinema is comparatively minor to be sure: no one will ever mistake them for great art. But their influence continues to be felt today in every new summer hit that comes along. In an age where spectacle and bombast are as disposable as ice cream wrappers, their durability becomes a selling point in and of itself. Dinosaurs will always be cool… a fact for which the Jurassic Park trilogy should be eternally grateful.

THE DISCS: The set contains three discs, one for each movie. Video transfer is surprisingly substandard for the first film, which shows a lot of graininess in some of the shots. The two sequels betray no such flaws, however. The various behind-the-scenes documentaries are outstanding, with in-depth discussions from everyone concerned about the development of the film’s groundbreaking effects and the ways they stretched Michael Crichton’s source material into a trio of feature-length films. They aptly demonstrate how the trilogy influenced future films, as well as Spielberg’s innate genius for the pure craft of filmmaking. Some of the Blu-ray menu features are a little clunky – like not restarting the movie after it’s been paused for a while – but also clear and easy to maneuver.

WORTH IT? Some of the specifics could be better, but the set looks terrific by and large, and the movies themselves benefit from the transfer to HD. It’s worth the price of admission for casual fans and cinephiles alike.