June is a mix of “The Omen” and “Carrie” but sadly lacking in most of the qualities that have made those two films classics in the horror genre. In a 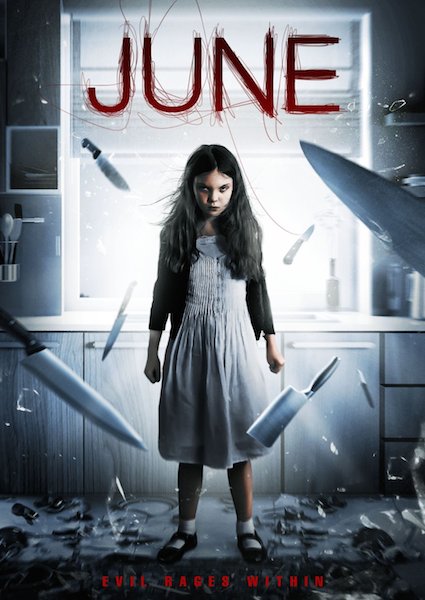 flashback sequence we see a couple who are members of a Satanic cult, allow their baby to be used in a ritual to infuse its body with that of a powerful spirit named “Aer.” A young member of the cult inexplicably kills the high priestess and runs off with the baby as the other members are killed. Nine years later, the baby named June is now in the foster care system, bouncing from family to family. She ends up with a family of trailer park white trash who see their foster kids as little more than a source of income. When June gets upset, much like Carrie, she is able to display powerful telekinetic powers.

After a disastrous incident her case worker, Mr. Emmanuel (Jemison), places June into the loving home of Dave (Van Dien) and Lily Anderson (Pratt); the very same Lily who took the baby during the ritual years earlier. But does Lilly know it’s the same girl? Apparently not, but who the hell knows! It’s one of the many vagaries of this head-scratching film. From there it is the standard troubled little girl stuff we have seen in numerous horror films over the years. At first June seems normal although a little quiet with a penchant for drawing creepy pictures which has become a well overused plot device in these types of films.

Soon however June begins to use her powers to lash out at those she feels are a threat. She eventually causes Dave and Lily to split up. A predictable twist puts June right back into the hands of the same cult who again seek to user her during a ritual and exploit her powers.

Without giving away the film’s twist it is hard to rectify June’s placement in some of these horrific foster homes knowing what we would learn later. There doesn’t seem to have been a great deal of logic involved in this aspect of the story. We also never learn much about the cult of the evil spirit “Aer” and without knowing this it makes the film fall flat.

From a technical standpoint, June is a well-made film. It is shot beautifully, and while the visual effects are few they are done well. The performances were also quite good from the adult actors all the way down to Kennedy Brice as June. Brice is able to convey a lot of emotion just in her facial expressions. It’s just too bad that the film didn’t seem to have a clearly defined course. As it stands June is just a run-of-the-mill feature.

Surprisingly the DVD has a nice amount of extras for a low budget film.