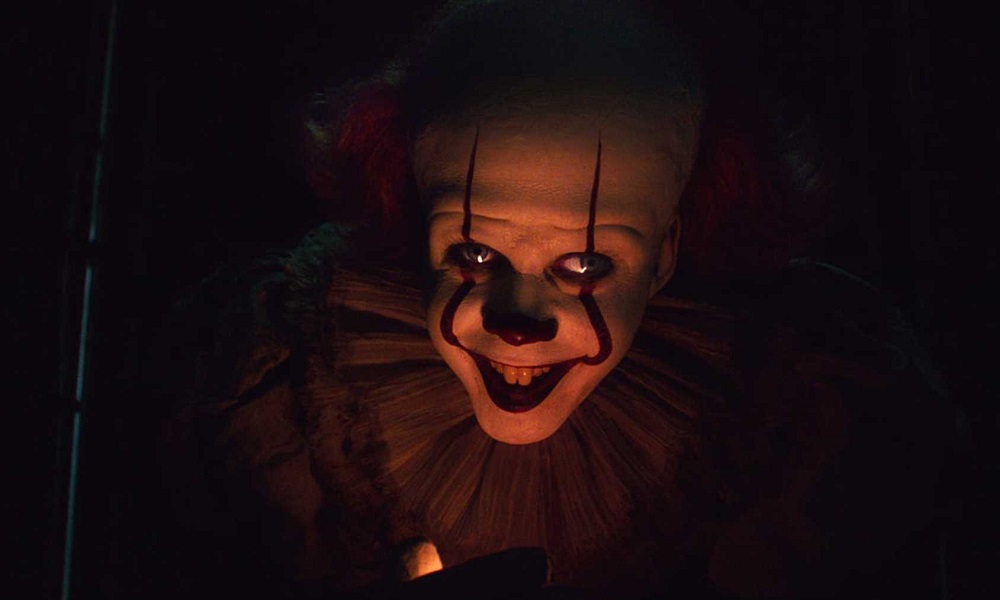 When Stephen King’s legendary Losers return to Derry, ME to confront Pennywise the clown a second time, they arrive short-handed. Moreover life, while kind to the bulk of them on a professional front, has left them scarred and haunted by broken relationships, unhealed wounds, and the endless grind of adulthood’s little failures. Then the call comes from their old friend Mike (Isaiah Mustafa). “The clown is back. Honor your oath.” And the courage and resiliency and belief in themselves they held as children suddenly seems like a million miles away.

It: Chapter Two struggles madly for that particularly adult brand of terror, of youth’s wasted potential and scars that never heal. It’s a challenging brew – far more challenging that the very different fears in It: Chapter One, which boiled down to children facing their demons – and it costs the new film dearly. Not enough to derail it, for it still holds enough deliciously horrifying moments to merit a look. But considering what a masterpiece the first film was, disappointment always lingers around the edges of this one.

In the original novel, King shuttled back and forth between the Losers as tweeners and as adults 27 years later. As a filmmaking endeavor, it makes logical sense to present each time period separately, rather than constantly cross-cutting and bogging down both threads. Both this current big-screen cycle and the 1990 TV miniseries benefited immensely from the decision. And yet the cross-cutting in the book provided one tangible benefit: it propped up the often-problematic adult half of the narrative with the undeniably stronger children’s half.

That proves Chapter Two’s bane as it works far too hard for far too long to muster the same dread purpose that made its predecessor so strong. Director Andy Muschietti possesses strong instincts for where this movie’s heart should lie, and he retains his ability to produce big-league scares from one of King’s most beloved works of pure horror. (Bill Skarsgard’s always terrifying Pennywise is still an ace in the hole on that front.) But that’s blunted by a lot of earnest soul-searching that never gets off the ground despite the herculean efforts of everyone involved.

Part of the problem comes from Pennywise’s origins, and the methods the now-grown Losers must use to slay the beast for good. King’s novel got awfully wobbly at those moments, and Muschietti fares little better. Having established a monster that could literally become anything, the question of how to kill it becomes more confusing the more details that are added on. It’s all ancient tribal rituals and coming together as a group and secret twists that don’t hit home because the film doesn’t quite convey how important they are when it needs to.

In other words, a mess.

The ensuing Widget Hunt sends the Losers out individually to different corners of their home town in a lengthy second act intended to remind the characters of their long-gone youth. The cast earns their keep by doing a lot with a little on that front: keeping the nostalgia from descending into pathos and working overtime to mine the proper mood from the material. But the effort becomes repetitive after a time, with each Loser taking a turn in the spotlight without moving the tension forward.  You can really feel the gears grinding in such moments, as the film casts desperately about for something to latch onto.

Pennywise himself scuffles far more than he should for the same reason, though as with the rest of the cast, Skarsgard rises to the challenge and then some. The ritual and symbolism obscure his obvious eagerness for a rematch, but it also beggars the question of why – if the Losers are still such a threat to him – he toys with them so interminably here. There’s no sense of narrowly avoided fates in the Losers’ respective stand-offs with the clown, just empty scares without any real threat behind them. The monster seems strangely indifferent to them at times, despite his repeated eagerness for revenge, and even shares the films’ nostalgia for these heroes in their younger forms. The older Losers seem to bore him and his taunts – intended to reach their deepest fears – seem devoid of the barbs that made him so terrifying to them as children.

The same holds true with similar elements from the novel, such as the reappearance of childhood nemesis Henry Bowers (Teach Grant), or the problematic suicide of fellow Loser Stanley Uris (Andy Bean). They both work reasonably well, with Bowers simultaneously as pathetic and frightening as he should be, and Uris a bound part of the drama in ways that extend beyond his absence. But they fumble for traction with the rest of the film, and only add to the shambling, ungainly mixture of elements that Chapter Two never quite brings together.

From time to time, the chemistry works as it should, as treasured memories point a way towards finally stopping the monster, and the notion of “old friends” shines through in a conversation or interaction between two or more of the cast. At times, Muschietti plays everything for laughs, which works just fitfully enough to make you hope he can pull it off. Shades of The Bride of Frankenstein lay in those arch moments, and the film pays direct homage to a number of other horror classics in similarly knowing fashion. Murschietti shows an adept hand at the goose-em horror set pieces too, as Pennywise comes at us all catawampus in various hideous forms to vex and terrify our heroes. Between that and the performances, the film finds some measure of success.

And yet even with its strengths, Chapter Two betrays a curious lack of urgency: reveling in the hollow surface of the shocks without connecting to the deeper themes and ideas knocking around beneath it like so many billiard balls. The running time of nearly three hours speaks far less to rich storytelling than a vain effort to spin straw into gold, seeking profundity that it never quite finds.

As a postscript to the superior first film, it will suffice, and King’s fans will certainly see the author’s signature flourishes here. But its rewards come with a lot of frustration. The first chapter stands as one of the best horror movies of the last few years. This one is just… adequate. And no matter what age you are, that always feels like a letdown.

One thought on “It: Chapter Two — Movie Review”