IRONTOWN BLUES is part of the ‘EIGHT WORLDS’ series–a loosely coupled (and not particularly consistent) series of books by John Varley, a Hugo and Nebula Award winner. 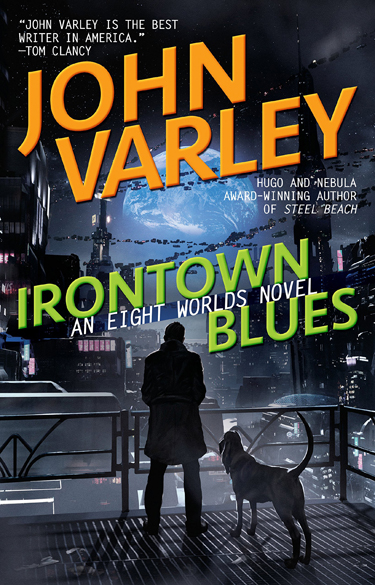 The basic premise is that in the not-too-distant future, as humanity is starting to settle other planets, an Alien invasion decimates the Earth, banishing the survivors to various colonies on the Moon, Mars, and various trans-Jovian moons.

This novel follows Christopher Bach, a former policeman in a lunar city who is badly injured in ‘The Big Glitch’—a catastrophic computer failure (there’s a lot more to that but I don’t want to get into spoilers here).

Bach, once healed, becomes a Noir-ish Private detective s in one of the tunnels that, together, constitute the entire moon colony. When a beautiful blonde walks into his office with a case of super-leprosy that, she says, was deliberately given to her, he and his partner swing into action.
His partner is the most interesting and compelling character in the book. SHERLOCK (the partner’s name) is a dog—cybernetically-enhanced and far more intelligent than an ordinary dog, he is both smarter and more useful than his human partner.

Together Bach and Sherlock work to trace the blonde and find out who might want to harm her.
The trail leads to IRONTOWN, a segment of the Lunar landscape that everyone avoids, so dangerous that not even the police go inside.

Bach does, however, and is immediately kidnapped and locked away deep inside IRONTOWN.
SHERLOCK, injured during the kidnapping, finds a pack of dogs just as intelligent as he is and, with their aid, finds the missing Bach—just in time to witness what might well be the end of the world.

It’s a pretty standard story—an old-style detective story enlivened by the presence of SHERLOCK—especially when we’re introduced to Miss Penelope Cornflower, a certified adept who, with some difficulty, can actually understand most of what Sherlock attempts to communicate! From the time she is introduced, we begin to see the story from two sides—from both Back and Serlock—their POV’s are so different in many ways that it is amusing to conjecture on whose world view is, in fact, the correct one.

In any case, the story rolls along, with Bach and Sherlock searching, being repelled, and searching some more. When Bach is kidnapped, SHERLOCK does everything possible to find him—and reveals (to us) that he is even more intelligent than Bach thinks he is.

Now, the story ends with a pretty lame and, apparently, hurriedly conceived attack/battle that forces events to a conclusion. At first, this disappointed me. I was enjoying the tale and the characters and now this ending was being forced upon me—but it made me think about things and I came to a realization.

The plot of this book does not mean a thing. It’s not really important what happens to the inhabitants of Luna with their themed tunnels and ‘Disneylands’ designed to give the inhabitants a feel of forest and snow and blue sky.
That’s all window-dressing. It means nothing at all.

What is important about this book, what gives it life and flavor is SHERLOCK. Not because it’s about him, per se, but because it’s about the attachment—the love, if you will—between a man and a dog.
With the dog’s part made perfectly clear. Sherlock does what he does not because Bach is his ‘Alpha’ or his Mater. No, Sherlock endures pain and hardship because he loves Bach. And Bach loves him just as much.

I’m going to be honest here—had Mr. Varley decided to kill Sherlock, I would be writing a very different review. It’s Sherlock that makes this novel stand out—and killing him for dramatic reasons would have been just as wrong as killing the lead character for the same reasons. The ending, rushed plot and all, left me with a good feeling that enhanced my enjoyment of this book. If you like SF, you’ll probably like this.