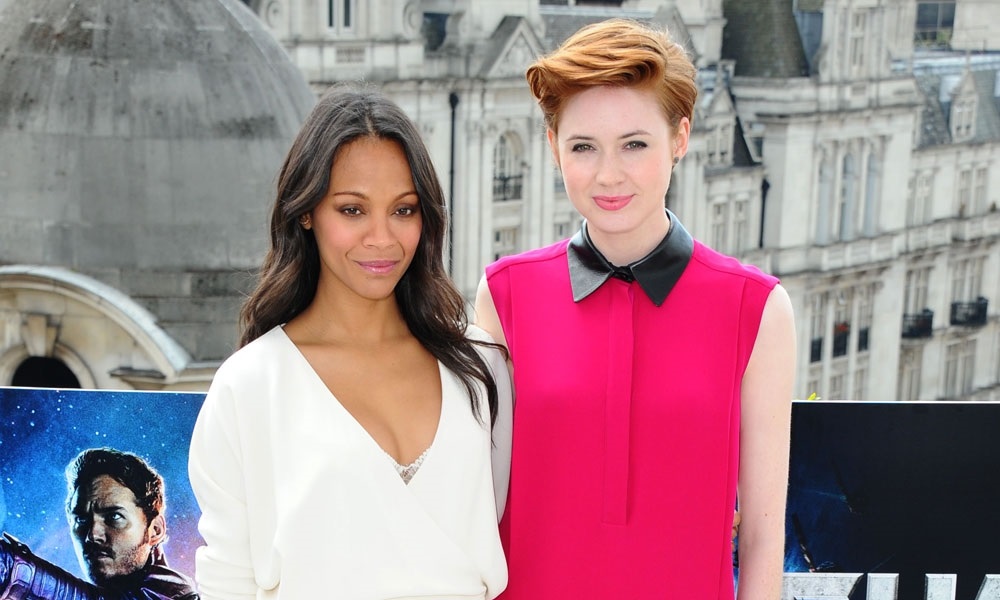 Neither Zoe Saldana nor Karen Gillan were strangers to science fiction when they signed on to the Guardians of the Galaxy franchise. Gillan rocketed to fame as Amy Pond, one of the most popular Companions on Doctor Who to date. Saldana took the role of Uhura over for the Star Trek reboot shortly before appearing in the James Cameron blockbuster Avatar. They return to familiar territory with Guardians of the Galaxy Vol. 2, playing the feuding sisters of Thanos pulled into another plot to destroy the universe. They talked about the project during a recent press day for the film.

Question: How do you guys handle those long hours in the make-up chair?

Zoe Saldana: It can take a long time. I just talk my team to death. I don’t shut up, from 2:30 in the morning until we’re on set and James says “Action.” I feel like that’s how I get time to go by, because if not, I’ll just go crazy. There’s not much to do at 2:30 in the morning besides sleep, so [Laughs] you can’t eat, you can’t really move around that much because they need your hands and your face, and your mouth needs to be shut because if you open your mouth you’re going to get a whole bunch of green paint sprayed into it. So you just talk.

Karen Gillan: For me it’s sort of become of my ritual of getting into character. I did this rehearsal as Nebula one time, not under makeup and I just didn’t feel like her. It’s an imperative part of the process for me now. It’s like I literally get to wear her skin, which is the closest I can get to her, so that’s kind of cool.

Q: What were you most excited about returning to this? What was the most exciting part of the process?

ZS: I think that what I loved the most, and it may sound selfish, but it was the relationship between Gamora and Nebula. I’m one of three sisters. I have been itching and yearning to see more of a female presence in action films because I love action films. I’m not that deep. And so to have a film with three female characters who bring such unique qualities to it… I was appreciative and super excited and anxious in a way, because I know that Gamora is a much more reserved character, so we couldn’t make it a soap opera like I would have wanted to.

KG: It’s amazing to be welcomed back into this. I had such a good time on the first film. I was this evil villain, kind of watching from the sidelines a little bit, and to be so involved this time around, just felt marvelous. I’ve done science fiction before, but I played a human being in Doctor Who, and my character was kind of exploring this new world. Nebula’s been in this word. She’s a part of it, it’s perfectly normal to her. That just frees me up as an actor. I mean, I can make any choice, and it could be valid, and that’s quite fun as an actor. And Guardians has developed such a loyal fan base, like Doctor Who, and that’s the most exciting thing: to actually be in something that people care about, which is quite rare. That’s what I love about sci-fi in general.

Q Karen, I was curious how you got into that dark space where Nebula is?

KG: I feel like I’m her lawyer, and I’m here to explain to everyone why she’s justified in being a really mean villain. [Laughs.] And for me that means exploring her backstory and her relationship with her father and her sister. I was just so excited to move into that space in the second movie: to get to portray that side of her.

Q: Zoe, you mentioned yourself that you’ve been in three different sci-fi movie franchises. If you had to choose another one to do, which one would you choose?

ZS: Dune. I was Lady Jessica like every other Halloween! And when I wasn’t Lady, when I wasn’t a Bene Gesserit, I was a ninja. I would, I would love to be in Dune. And I heard that Denis Villeneuve is thinking, he’s revisiting and I hope, I hope he, he decides to do it, because I’m one of those people that thinks David Lynch did a great job. Of course, I was six when I saw Dune, so…