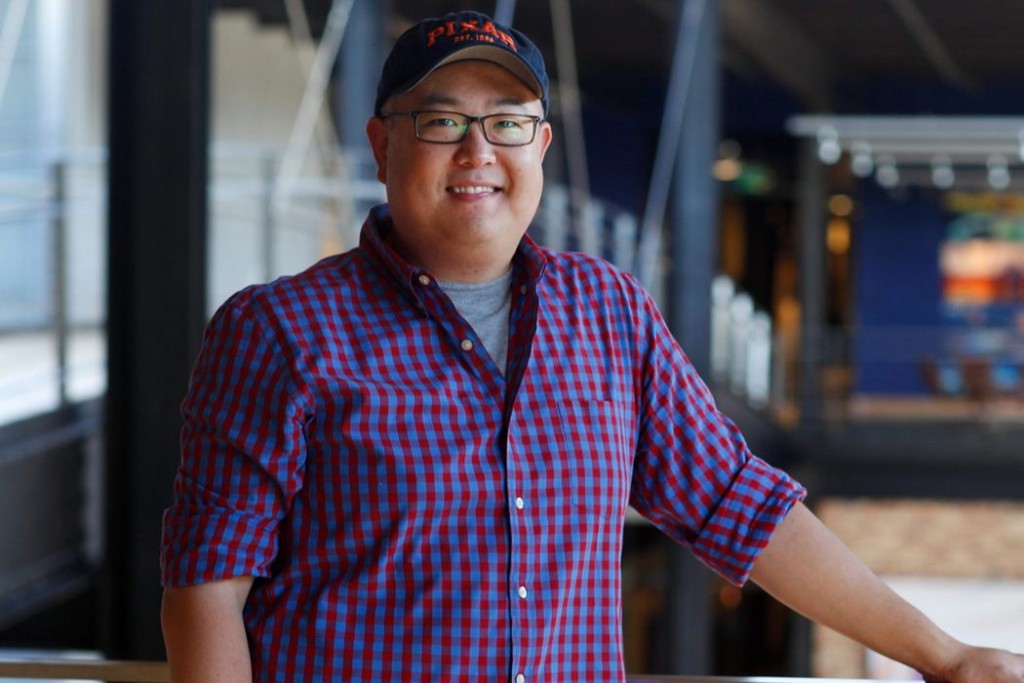 Peter Sohn’s animation career goes back to 1999’s The Iron Giant, and including work on such Pixar classics as Finding Nemo, Ratatouille, The Incredibles and Brave. The Good Dinosaur represents his first effort as a director. His producing partner, Denise Ream, also produced Up and Cars 2 for the studio. The two of them sat down at the press day for The Good Dinosaur to talk about the trials and triumphs that successfully delivered their vision to the screen.

Q: Was there a job that you wanted a dinosaur to have that couldn’t make it into this film?

Peter Sohn: Yeah, we did have a saloon owner. [Laughs.] What’s so funny is that when we first came up with the project, it was kind of Western-infused, and so we started down that route in the evolution of this film. But when we had the saloon owner, we had, like, miners, and we had all of this kind of overt Western clichés. It just didn’t work, because it felt like we were making fun of Westerns. I grew up on the American West of these movies. And I felt like we were just making fun of it. So I asked the guys, “Let’s keep pulling back and trying to find what we want to say about the frontier.” And what we found was the idea of surviving out there, because when we did the research out there, there were so many times about how people made it across this tough country and learned to survive.

I grew up in New York. I didn’t really witness that type of world, but my parents had a grocery store where we were a family unit surviving in the city, working all together for that. And when we actually met these farmers out there, and these ranchers in the northwest, they had the same thing. They were families surviving on like, thousands of acres of land, and a whole different thing, but it was still that family unit, So we said “This feels universal. This is something that everyone can relate to. Let’s continue to focus on what that would be in this world.”

Q: Talk about Sharon Calahan’s impact as cinematographer on the look of the film.

Denise Ream: It all started off with the movie, Shane. The opening in the Teton Valley, in Jackson Hole, Wyoming. And Sharon was brought in. I remember, when we were researching and planning it was just a no-brained. I have her paintings. I bought her paintings from that area, they hang in my house. When we brought her in, she said, “We should go up there, if you’re even thinking about it. Let’s plan a trip. Right now.” Sharon was born in Washington, and now lives in Oregon, but she literally painted all along the River from the movie, going through Oregon, Idaho, and Wyoming. We needed hit some of the places that she’d painted at a specific time, because the season that we would go is almost close to now, where the Aspens were all changing, the leaves were all changing, and she knew that.

When we went out there, she really taught me a lot about that world, about how beautiful it was. She’d tell you, “Look at the river. You know why it’s this color? The rocks underneath have a certain thing growing on them that reflects the light in a certain way, so you have to understand that.”

Also, the weather. If you don’t like it, in ten minutes it’s gonna change, you know.” She just understood every aspect of that world, and everywhere we’d go, she would talk about the Aspen trees, and the flickering leaves, and how it all kind of came to life. But there was also the danger in that beauty. She would point out the beauty, but then our guides would point out, “that’s a landslide area right there.” So that inspired us to try to make a movie where the antagonist was more nature than any specific character.

Our story artists would draw a situation, knowing that there wasn’t a lot of dialogue, that we would kind of rely on the background and the world, and draw something rough. And then she would take hose board drawings and start painting what she knew of the world over them. And then we would talk about areas from Oregon to Idaho and kind of some of the red desert of Wyoming.

And we would just talk about locations. Yellowstone, and all the rural areas. She knew all of it. And so she was kind of our guide, artistically, through the lighting and all of that. And just from a practical point of view, we fought pretty hard to get her on film, because when we re-started the film, we had a very, very condensed scheduled and I knew that: we needed Pete just to focus on the story with the story team, and the writer, and the editorial, and I knew that Sharon could sort of help the back half, so to speak, of actually executing the movie.

Q: I want to ask about some of the “out there” scenes in the movie, especially the Pet Collector sequence and the Bad Fruit sequence. What inspired those?

PS: I played the Pet Collector —

DR: He didn’t want to. But when he pitched the sequence, John [Lasseter] was like, “You’re gonna be the Pet Collector.” You know, he was like — there was no discussion there. He was like, “Well, I don’t want –” No. Then he would direct me.

DR: He directed him.

PS: He’s like, “Lower. Lower. Lower. Lower, come on.” [Deepening his voice.] This is as low as I can go. In terms of the world, of the frontier, he was kind of this like a transient character that’s been living out in the woods too long. But it was almost meant to represent what would happen if Arlo got stuck out in the woods. He would be afraid of everything, so terrified that he would come up with these protection things that would protect him from there. And then the idea that he’s like, forcing Arlo to keep this thing, when Arlo’s final step is to say, “I can’t keep him.” My character is giving him the wrong advice. Preventing him from growing up, essentially. All of the characters that Arlo meets all kind of stem on Arlo’s journey and how he matures and gets through his fear.

And in terms of the berries, that was all some of the research that we did: exploring every kind of thing that nature does, from flash floods, to getting your foot stuck in a rock. We would hear all of these stories. And we saw some footage of some animals eating fermented fruits. It was really funny. One of our artists just took it to the next level.

Q: This is a story about a character who wants to prove himself. That could be the description of the journey you had in making this film. Did that irony become apparent to you?

PS: Yeah. It’s very insightful. Being a first-time director at a place like Pixar, the bar’s so high. It’s terrifying, as an artist and as a person, trying to find yourself in this kind of a job. It is overwhelming. But at the same time, through these obstacles, and trhough support from people like Denise and other directors at Pixar, you begin to find strength. It’s a very simple concept. And that irony that what you’re talking about didn’t hit until we were well into production.

We were moving so fast. It was a shortened timeline, we were just going, going, and going, and a lot of it just started filtering through. But then once it hit, it would just cement. There were days that were so dark, that you were just like, “Why am I doing this?” And then you remember how much you love the people around you, and you love these characters, and you love the message that is in there.

It sounds sappy, but finding that heart, like Arlo did, it was overwhelming. You can’t beat fear, but you can find ways to survive it. You can’t beat nature, but you can learn to survive it, and it has its beauties too. Arlo would find all of those things because of his love for Spot. Can he face those things? That love for Spot gets him through. I had two kids during the production of this movie. Vivian’s five, and my son, Sam, is three, and I’m like, “Boy, I would love it if Vivian could get that idea, that even when I’m scared, love can pull me through.” And that’s sincere. I hope the movie reflects that.