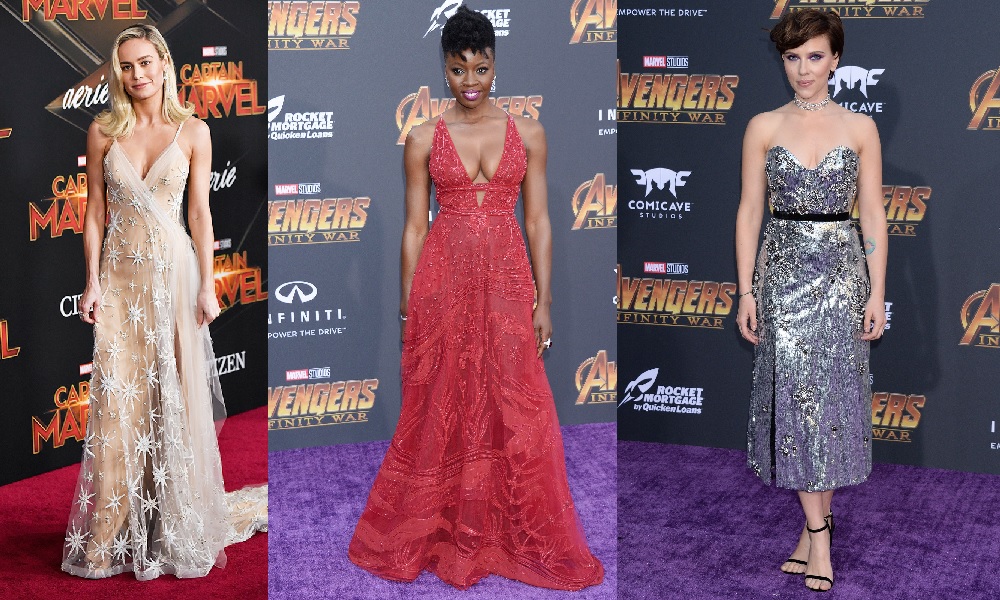 Scarlett Johannson is one of the stalwarts of the MCU, having played SHIELD superspy Black Widow six times (and counting) since 2010’s Iron Man 2. She’s joined in Avengers: Endgame by two more recent additions to the Marvel Cinematic Universe: Danai Gurira, who earned her spurs as the brilliant scientist Okoye starting in last year’s Black Panther, and Brie Larson, who entered the MCU earlier this year with Captain Marvel. The trio spoke to the press recently about their participation in the MCU and Endgame, specifically, which opens April 26.

Question: Talk about this journey, ten years of being a part of this, and how you’ve approached that challenge as an actor.

Scarlett Johannson: My character really started very simply: a spy posing as a sexy secretary. I certainly didn’t know how the audience would react to her, or my interpretation of her. And she’s a beloved character in the comics and had been for a long time. And I feel, and then the next time that we saw her in the first Avengers, she was sort of one of the boys for better or worse. And that made sense then. And I think the audience has pushed all the studios and filmmakers to really push these characters and what they can be. I feel the character has sort of grown in reaction to that, and the movies have really grown in reaction to that kind of fan encouragement.

Q: Brie and Danai, how does that compare with entering the MCU more recently?

Brie Larson: I came at just the most magical time, I think. Really my first introduction to everyone was the ten-year photo, which was a really remarkable and special day. It was also super surreal and we weren’t allowed to talk about it, so the whole thing has always felt like a dream. This film [Endgame] will always be personally dear to me because it was my first time playing Captain Marvel. We shot this first, before the solo film. So I had to stumble and try to figure out who this character was with no script for this and no script for Captain Marvel either. All that, plus I had to perform for the first time in front of legends. But it was incredible.

Danai Gurira:  The beauty of being here today is simply being embraced in this universe. To be a part of it, and to be welcomed to it so warmly. And that was a beautiful next step for me. Okoye resonates with me because I was raised on the continent of Africa. I was born here, but I was raised on the continent. So seeing a country like Wakanda which had no history of colonization and became so powerful, that really spoke me. And I used that for the character, who believes in the sovereignty of her nation and has the ability to protect it, but who loves her life [Director] Ryan Coogler really allowed me to imbue her with the idea that she has a good time. She doesn’t have rage issues. She doesn’t have that going on. So it’s been really fun to get to see her in all these different ways in Black Panther, and then step forward into this larger universe, and seeing how she responds. The first day of Infinity War when they all came to Wakanda and we were coming onto their set. We opened that tent flap, and inside are all the Avengers sitting there. That’s the minute you realize you’re a part of a universe, which was pretty darn awesome

SJ: And honestly, it’s so amazing bringing new actors onboard. I remember when Lizzie [Olsen] signed on. Colby [Smulders] was there. We were all clinging to each other. It was so nice to see other female cast members. And then with Brie coming on and Karen [Gillan] and Danai. I’m amongst so many wonderful actors, so many strong actors, and such a… it’s just grown beyond my wildest dreams. I could never have imagined where this would take us. And all of us. It’s been quite a journey.

BL: As big as this movie is, it still feels like a bunch of kids. I used to make movies in my garage over summer break, and this feels just like that: there is still this sense of wonder and play and encouragement. And of course this film deals with some heavy subject matter, so you’re bouncing in between things that feel very deep and serious, and then we’re going off and playing Boggle. There is no word I can describe it with other than surreal. And I’m super excited for this to come out, mostly just so that I can talk about it. I want to be able to talk about my experience, which I haven’t been able to do for a very long time.