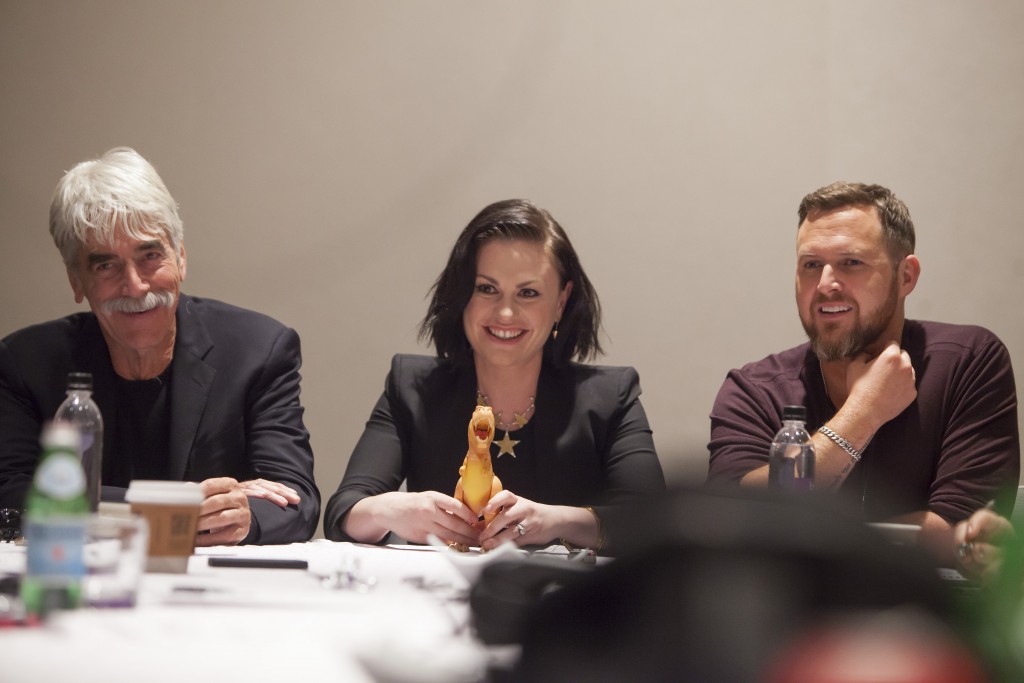 Sam Elliot is a legend among character actors, starting all the way back in Butch Cassidy and the Sundance Kid. Anna Paquin won an Oscar at the tender age of 11, and has parleyed that into a career full of admirable roles, from Rogue in the X-Men series to Sookie Stackhouse in HBO’s True Blood. AJ Buckley is a TV warrior, with prominent roles in such shows as CSI: New York and Justified. All three of them had the opportunity to play cowboy Tyrannosauruses in Pixar’s latest animated feature The Good Dinosaur, in theaters this weekend. They recently sat down with the press to talk about the project during the press day for the movie.

Question: How does it feel to be a T-Rex with an overbite that looks like your moustache?

Sam Elliott: Never thought of that until I’d heard that in the last session. I’ve not seen the film yet. I’m looking forward to it, particularly after hearing all of the positive feedback about it. But it’s cool.

Q: How exciting is it when Pixar comes knocking at your door to say, “We want you to voice a T-Rex?”

SE: Pretty cool. I mean, it doesn’t get any better than that, in terms of the animation world.

AJ Buckley: It’s like getting a call that somebody has made the Olympic team. It’s like, “Are you sure? Are you sure they want me?”

Anna Paquin: I didn’t even get to the dinosaurs part. It was like, “Pixar? Yeah, I’m in.” Haven’t seen the script, don’t know who the character is, don’t care. This is the studio you want to work with.

Q: And when you first get that call that Pixar wants you, what was the specific pitch that you got in terms of your characters, what the director was looking for, etc.?

AP: Well, I’d already said yes before they actually told me what it was about. And, I want to say that they seemed ever-so-slightly nervous that I might be offended that they wanted me to be this like, big, bad-ass T-Rex. I was bracing myself to be like, some little thing, some really wimpy figure, ’cause I’m a girl. And when they tell me they want me to be a T-Rex. I’m like, “That’s fantastic,” and they’re like, “Really?” And I’m like, “Yeah, that’s awesome! I get to be, you know, one of the dudes. Except a girl. Even cooler.”

Q: Talk about what you think these characters will do in terms of how people perceive them. T-Rexes have always kind of been pegged as the bad guys.

SE: Well, it totally turned it upside down, I terms of the sensibility of these guys, they’re still meat-eaters. They just found a better way of doing it. I think that’s part of the charm of this thing. Certainly all of the overriding themes that are involved, and whether it’s the T-Rexes or the kid on his journey, this is about real life. There’s a lot of themes in here that ring true for families and parents and children. And there’s great things to be taken away from this. I mean, it’s one thing to be able to entertain people, and we’re blessed ’cause we get to do that, I’ve always felt. But it’s another thing, to inform people, or to provoke people, or make them think.

Q: Did the western elements resonate with you? We’ve seen a lot of westerns cropping up of late…

SE: They did. It’s not a genre I plan on letting go anytime soon. I’ve got a couple of projects we’re working on. It’s just a genre that speak to me and that I think still has a lot to say about us, about who we are as a country.

Q: The sibling rivalry was nailed down to a *ahem* T. Did you get any rehearsal time together?

AP: I have a brother. I’m familiar with this.

AJB: That’s the crazy part, is like, none of us actually worked together. Until this morning, it was the first time we’d met. I was the last person cast. I didn’t hear their voices in the scene. Just heard a scene here and a scene there, and it wasn’t mixed yet. Peter [Sohn], was very, very specific about what he needed. If it wasn’t for Peter and his ability to walk us into a room with an empty canvas and tell us exactly what it was going to look like…

AP: He was amazing. I mean, that’s an enormous compliment to the entire process.

SE: When you go in there, and you meet this guy, that is so enthusiastic, and so specific in his vision, and he has this incredible ability to draw that vision out of the performers, and that’s a real gift of a director. He was a very enthusiastic individual, and a very sweet guy, and he was the right guy to do this thing. It may be his first, but it’s certainly not gonna be his last.

Q: How many cool points did you score, doing a Pixar movie, with your family or children?

AP: I won’t know till the movie comes out, ’cause then the real cool points will start racking up. I mean, aside from the fact that I’d always loved Pixar, and had been sort of trying to figure out how to get ’em to want to hire me, and then it kind of just happened, and I was like, “That’s really cool and awesome, and sort of spooky.” Yeah. It’s — it definitely gives me good street cred as a mom, you know? “My mom’s a T-Rex. What’s your mom’s superpower?” [Laughs.]

Q: Disney-Pixar films have a good tradition of having these emotional cores. Do you remember the first animated film from them that sucked you in?

SE: From either company? Fantasia. That was the first one for me.

Q: What was it about Fantasia for you?

SE: Everything. The animation probably more than anything else. But the incredible characters. And this, you know — I don’t even remember how old I was, the first time I saw Fantasia, but I still revisit it, you know. Maybe the innocence of all of it, and at the same time it was — it had some really dark elements? Seemed real, on some levels, as fantastical as it might’ve been, real in terms of what it represented to me.

Q: Did you guys do any T-Rex research to prepare?

AP: Nothing formal. The characters are the characters, though my kids have this really cool series of books called How Does a Dinosaur Clean Up His Room? and How Does a Dinosaur Eat His Food? I don’t know if any your guys have kids or have seen this. The books use dinosaurs to teach important childhood lessons and life skills and morals. And so there’s quite a lot of in our household at the moment, and sort of had them for a while. I also love visits to the museums.

AJB: I was obsessed with dinosaurs as a kid. I was grounded, many times, for digging up my mom’s beautiful backyard looking for fossils, and using my dad’s toothbrush when I thought I’d found something and needed to gently scrape the dirt off. I was ready. I waited, I worked my whole life, for this moment, to be a dinosaur.

Q: What does it mean to be a part of the Pixar legacy at such an important time for Pixar [20th Anniversary]?

SE: Well, I think it’s huge. For obvious reasons. It’s huge for me, personally, because the 25th of November, if my mother were still living — she passed away three years ago — would’ve been her 100th birthday. So that’s a milestone for me. But anytime you get to be involved with a company like Pixar, it doesn’t matter what day it is, or date it is, or anything else. I mean, this is a gift. I just look at this as a gift, and a grand opportunity, over the long haul. I’ve been in this business for nearly 50 years, and this ranks right up there with ’em, as far as opportunities and things I’ve enjoyed doing. And the great reward is gonna be on Tuesday. I’m going to be seeing it with an audience, see it with my family, and I know my mom’s up there, thinking “that’s my boy.” Pretty cool.