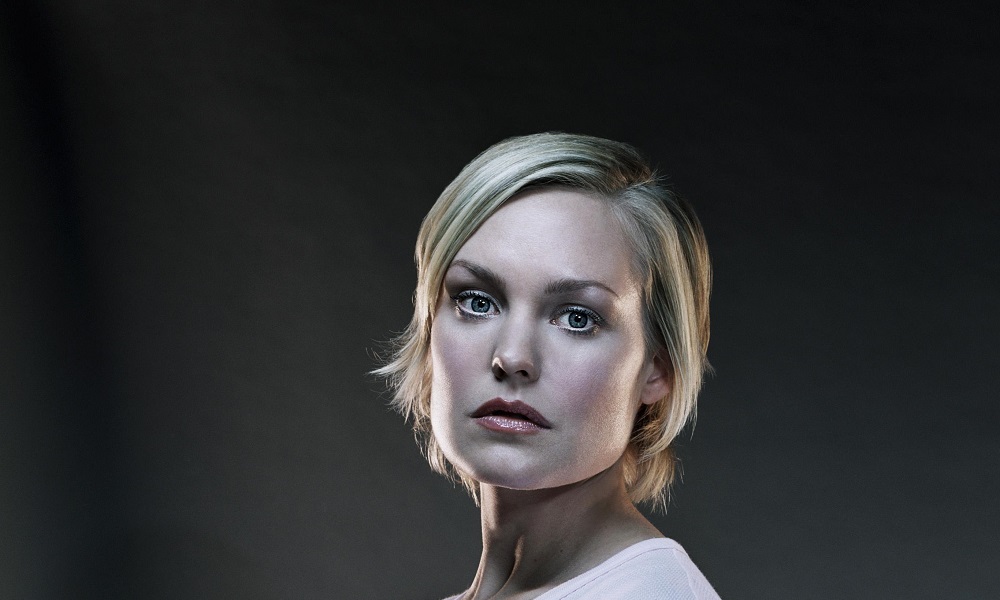 Laura Allen has been a stalwart TV warrior for many years, with shows like All My Children, The 4400, Ravenswood, and Awake. She mixes it up with the hardcore horror film Clown, which arrives in theaters and on VoD today. In an exclusive interview with The Sci-Fi Movie Page, she talks about this decidedly different project.

Question: What first led you to this project?

Laura Allen: I was in New York City shooting a pilot, with a friend down in SoHo, a friend with a baby. Hurricane Sandy hit and we were without power for a couple of weeks. It really put me in the character’s mindset. You feel things spinning out of control, and you sense that darkness… the real terror of it. I read the script a lot during that time and it just spoke to me… not only the darkness but the strength that this character shows.

Q: Strong women, and the depiction of women, has been a hot-button topic in Hollywood these days. Horror movies have always been a lightning rod for that issue, and I’m wondering how you see that issue reflected in this project.

LA: What I really appreciate about this script is that it starts out like a rom-com. But by the end of the movie, the character has a transformation that’s moved her beyond her mundane reality. Horror can be savage, but it can also bring out the strength in female characters, and if you look at the classics of the genre – Halloween and The Exorcist come to mind – you see a very similar dynamic, of normal women placed in the darkest circumstances and finding reserves of strength that carry them through. It’s a very important part of the genre, especially considering that other horror movies don’t always treat women so respectfully.

Q: Why are clowns so scary? We all have our opinions, but with this movie, you may be more informed than most on the subject.

LA: [Laughs] There’s a mythology around clowns, going back to the Greeks. The make-up and the exaggerated smile behind a clown speaks to hidden things, something lurking just under the surface. You don’t know what to expect with clowns. You don’t know what you’re going to get. And while that can be used to surprise and delight us, it can also tap into some very primal fears. Something vicious and frightening may be lurking there, and catch you solely because it’s hidden behind that make-up.

Q: What’s it like on set when you’re grappling with that darkness?

LA: Well it’s definitely dark material, and it speaks to a very specified audience. You could feel it on set. We were a tight crew and everyone got along so well. But I’d just had a baby myself when we shot, and my mother was along to help. There was a point when she just had to excuse herself with the baby, when it just got to be too much. As an actor, you can use that vibe and really channel it into the work. And luckily, my baby was just a few months old, and couldn’t understand any of the context of what we were doing. Otherwise, we definitely would have made other arrangements!

Q: How do you approach material like this, material that has a specific appeal to a specific kind of audience? This is one for the gorehounds after all, and you need to get hard-core with the content. There’s no sense trying to water it down for a broader audience.

LA: I worked on a soap opera for a few years and I’m so grateful for that experience. I’ve done science fiction series too. Both of those genres are very specific, and it teaches you to seek out the specific tones and emotions you need to connect to those audiences. It’s liberating as an actor, but it’s also educational as well. You learn your craft that way, you learn how to find the right beat, the right tone, the right emotion for the piece. This film was great in that sense because it exercises those muscles. Hopefully that translates into a movie that the intended audience will discover and appreciate. And no, it’s not for everyone, but I think serious horror fans will find something different and special with it.