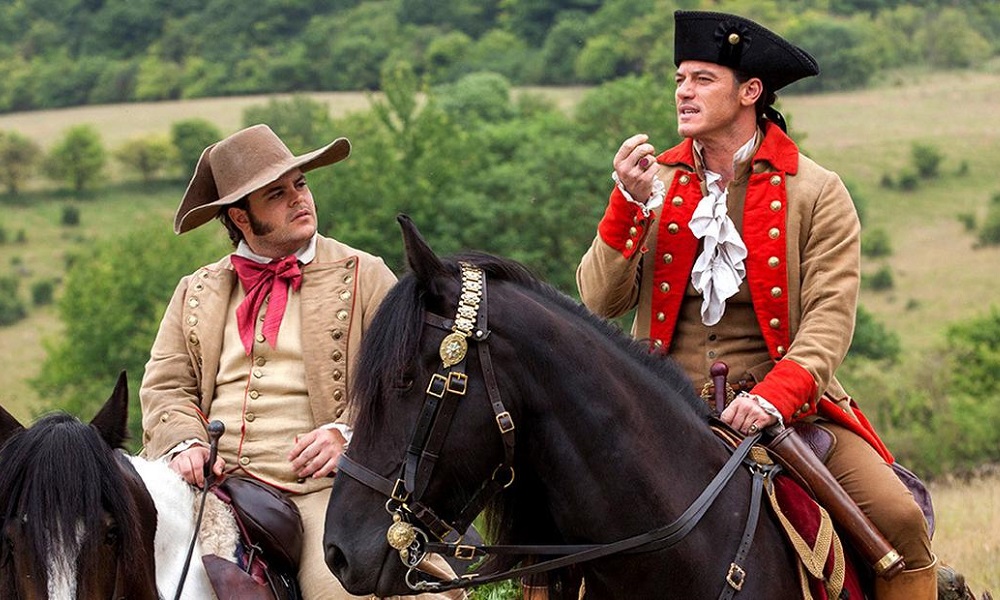 Josh Gad won a Tony award for his indelible performance as Arnold Cunningham in the Broadway, followed by prominent roles in the likes of Frozen, Jobs, The Wedding Ringer and The Angry Birds Movie. Luke Evans comes from a stage background as well, spending the better part of a decade on London’s West End before moving on to prominent movie roles in Dracula Untold, The Three Musketeers, Furious 6 and Peter Jackson’s Hobbit trilogy. The two team up in the new live-action production of Beauty and the Beast, playing the villain Gaston and his obsequious toady Le Fou. They spoke about the project at a recent press day for the film.

Luke Evans: A villain shouldn’t start out as the bad guy. A villain should end up being the bad guy, and I think with Gaston… to a lot of people in that village, he is the hero. He’s a bit of a stud. He’s got the hair, he’s got the looks, he’s always impeccably dressed, not a bad singing voice. He’s got a great pal who makes everybody support him and sing about him. And I wanted the audience to like him a little bit first, so that when the cracks start to appear, which they do very subtly, it stands out. When Belle first slams to door on him, he’s caught by surprise. There’s something inside of him that isn’t used to that. “This isn’t how it goes,’” he tells himself. “This is not what she’s supposed to be doing.” And although he keeps believing that Belle will change her mind, that’s where the cracks appear, where the jealousy takes over, where we can trace what he ultimately becomes.

Gaston isn’t like other Disney villains. He has no book of spells, he has no magic powers. He’s a human being, and he uses his status within that village to rouse a crowd. And he does it all from just being himself, which is quite terrifying in a way. So I played on that: I played on the humanity of the character as much as his larger-than-life qualities. There was a lot to pull on, and we decided in this version that he was a war hero of sorts. That’s why his murals are all over the pub that he drinks in. And there is a slight soldier, this animalistic soldier, in him when he finally fights the Beast on the rooftops. You see this man out for blood. It’s a scary moment to see the arc of somebody who was the loveable buffoon of the village become the real monster of the story.

Q: Josh, you’ve done singing and dancing before, so you’re no stranger to this world. Was there a challenge on this shoot, something you didn’t expect?

Josh Gad: I learned a couple of great lessons on this movie, one of which is that Jews don’t belong on horses. Specifically overweight Jews. [Laughter.] They would call action, and the horse – that they told me was trained for this movie but I believe they found in the wilds of England – just took off. Luke and I were walking into the village on our horses, and on action, all our horses need to do was walk side by side. It’s so simple. Luke’s horse does it. The two of them worked on The Hobbit together, and The Three Musketeers. They have this incredible background.

JG: They share a trailer. Mine is a cold-blooded killer. And he proceeded to moonwalk; he walked backwards. Then he ran through multiple extras in the village. Then he ran around – I didn’t even know it was possible – these pillars on set. I heard “cut” and I heard laughing coming from the horse’s trainer, and he came up to me and he goes, “I’m so sorry. I’ve never seen this happen before.”

Ironically, my horse’s name was Buddy.

I’m begging Disney to press charges against him, and I’ve told my agents to never send me another script with a horse in it again.

LE: Unless it’s on wheels.

JG: Unless it’s on wheels. In the sequel to Beauty and the Beast I drive a DeLorean.

Q: How hard was it adjusting to a new cadence and new lyrics for these songs, which everyone knows so well?

JG: I remember first getting the call, and I immediately flashed back to being a kid. I was 10 years old, it was 1991, and I saw the movie in a small theater in south Florida, I remember audiences applauding after these animated characters sang these songs. I’d never seen a response like that. It was very unusual. The Great Mouse Detective didn’t have much applause when I saw it, and The Black Cauldron certainly did not.

What Ashman and Menken brought to the Disney library hearkened back to the time of the Sherman Brothers, of you know, the early days of Disney. For us, that was a part of our childhood: Beauty and the Beast, The Little Mermaid and Aladdin. I cannot tell you how important that was. So when we revised them, I got nauseous. How was I going to bring a song like Gaston to life? And I went into my office and I started singing it, and I literally started choking up. You think back to yourself as a kid: you’re like, “oh my God, I’m doing this, I’m doing this for real, and I’m going to be the version that a lot of kids are going to see.” And that was such a thrill.

Then my kids walked into the office and were so tickled that Daddy was singing this song that they know so well, and I thought to myself “this is going to work. We’re going to make it our own.” I remember watching Luke perform the choreography for Gaston on the first script read – it took me a little longer to get it – and Emma Thompson performing “Beauty and the Beast,” and all of these pieces coming together before our eyes, and I don’t think there was a single one of us who didn’t have goosebumps. It was the stuff that dreams are made of.