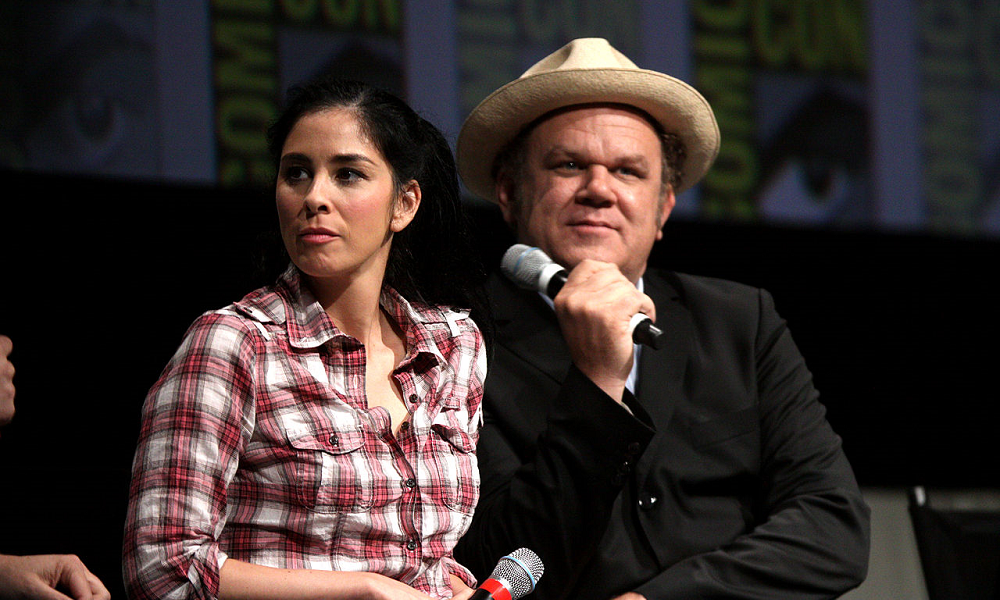 John C. Reilly has quietly amassed an astonishingly diver Hollywood career. He made his debut as a slow-witted sheep of a soldier in Brian De Palma’s Casualties of War, and has since amassed over 100 credits. His range is astonishing, with prominent work in historical dramas, comedies, effects pictures  and musicals. (He’s even stolen his share of scenes in the MCU…)

Sarah Silverman first came to prominence as a stand-up comedian, and no less authority than Mel Brooks called her one of the funniest comics in the world. She’s perhaps best known for The Sarah Silverman Program and her series I Love America.

Animation fans know them both as the voices of Wreck-It Ralph and his friend Venllope: roles they reprise in the sequel Ralph Breaks the Internet, opening in U.S. theaters this Wednesday. They sat down to talk about the project at the recent press junket for the film.

Question:  Ralph is essentially a character from another era, a vintage arcade character. Besides the fish-out-of-water qualities, what was the biggest challenge to adopting him to the Internet?

John C. Reilly:  Well Ralph was always a fish-out-of-water kind of character. How does a video game character behave in a game that’s not their own? There was a lot of that in here, watching Ralph try to figure out how this new environment works. The big difference is scale. The Internet is a literally infinite landscape.

It leads to this idea that the arcade is the childhood for these two characters and their friendship, and the Internet represents the sort of larger world beyond as they grow and mature. Ralph really worked so hard to get a friend in that first film. Now that he has one, he figures his whole life is solved. And then Vanellope starts to grow and mature, and realizes that she belongs somewhere other than her candy game. Relationships evolve, and I think the Internet made a great way to explore that concept in this world.

Q:  You two did you recording together?

Sarah Silverman:  We did it together, chumbo.

Q: How does that work? Do you have room to improvise?

SS: They give us a lot of freedom. We collaborate a lot; the script itself is so fantastic, but we get to play. They always book about an extra hour of time, because we get real chatty. And there is definitely an album, a very rated-R comedy album somewhere in the audio footage.

JCR:  Improv works best in real time. And since we all knew these characters so well, we could play with that, and the directors were very kind to just let us explore things every day. That’s one of the great joys of doing audio work: there is never the pressure of the sun going down. It was a real treat to get into the studio again with Sarah. Our friendship has aged five years since the last film, so it tracks with Ralph and Vanellope. We all kind of knew each other, Sarah and the directors and I. We learned how to work together on the first film, and we built these characters and the story together. So that when it came time to start this one, we could start from a very advanced place in terms of the relationship between Ralph and Vanellope. And yes, it’s very important for Sarah and I to be in the room together as much as possible. Some people say it doesn’t matter. It’s just a voice. But to me it does matter. I think it does come across in the film. I’m able to look at my friend Sarah and conjure what Ralph would say to his friend Vanellope. I think you can feel that in the film. It gives the film a soul it might not have if we weren’t there together.

Q: Sarah, you got your own princess song in this, from Alan Menken himself. Talk about that experience a little bit.

SS:  It was a dream come true. When the guys told me I was going to have a song, we had already been recording for a while. And I couldn’t believe it! Alan Menken was amazing: I got to meet him and work with him and rehearse with him. He played “Somewhere That’s Green” for me to sing. He wrote Little Shop of Horrors, which is my favorite musical. Then we recorded with a whole orchestra. Like you see in old timely movies. He was crazy. It was really the thrill of a lifetime.

Q: There’s always social issues surrounding the Internet: everything from trolling to tech addiction to the dissemination of propaganda. How you decide which social issues to feature, and what effect did that have on the development of the story?

JCR: I went in fairly early on to talk with the animators about how Ralph moves. We figured out his movements together. But during that discussion, we went fairly deeply into the Internet and its effects on the world. Our relationship to this technology, its power, and its effect on us. We don’t even quite understand yet just what it’s doing to us as a species. It’s as powerful as a nuclear bomb. It just uses other means. So it was really exciting in the context of a Disney film – where entertainment is job one — to be able to talk about some of these issues in a real way. Why do we crave the anonymous acceptance of people we don’t know? The way we’re bombarded with commerce on the Internet. It’s great to explore that in the context of an entertaining film.

SS:  For a comedian, places like Twitter are a great site to try out jokes or even just funny thoughts. But somewhere along the line, it became the place where I take in my news.  And now I wantonly look back on the times when I was funny on it.

The Internet is something new, and like John said, we’re still figuring out just how powerful it can be. But it’s like anything else: we learn how to navigate and how to protect ourselves. And what we can handle. And what we can allot ourselves. It’s like anything. There can be way too much of it. And there are bells that can’t be unrung that probably happen a couple of times a week or a day or in the middle of the night. But I think there’s a lot of good in the Internet too. It’s brought the world a lot closer. It makes us more aware when other people are hurting, and better able to act quickly in real ways. Waking up to my own white privilege had a lot to do with the Internet, for what it’s worth.

Q: Wreck-It Ralph has a lot of nostalgia in it, and you sense that in the second film too. Is there something you miss from before the Internet?

JCR:  It’s wonderful to have all these choices in terms of what we focus our attention on. That’s been amazing. But I do think we’ve lost the ability to perceive objective truth. “This is what’s going on in the world. This is what we are all dealing with.” Instead of all these versions of what’s going on in the world depending on what sites you visit. I think the human race could use a unifying way to communicate again.

SS:  I know this was terrible, and I don’t want to minimize it. I’m so glad it all worked out. But I remember when Baby Jessica fell down the well. And everybody tuned in. Everybody was concerned. She was everybody’s kid. I think we’ve lost that ability to really come together the way we used to.

Q: The last film ended with Vanellope becoming a legitimate Disney princess, and that paid off with the wonderful scene with the other princesses here. What do you think you brought to that equation? What does Vanellope bring to the table besides an appreciation for comfy clothes?

SS:  What makes the idea of Disney princesses a good thing is that it has grown and changed. Disney has taken on progress and inclusivity, and has grown and changed in positive ways. Classic Disney princesses – Snow White and Sleeping Beauty – they’re great, but some of the values they embodied weren’t so great. That started to change with characters like Belle and Mulan, who were smart and strong, and in Mulan’s case were from an underrepresented demographic. And really, this movie just faces it head on. Leans right into it. “You get saved by a man. You’re in great distress, your life is threatened and then someone else saves you.” It’s exciting to be able to acknowledge all of that and then shatter it a little bit here. You get to be this kid who becomes a princess with an attainable waist line. Who can wear comfortable clothes. And Twitter announced it a few months ago. Vanellope is Jewish. I said, “yeah. She’s Jewish” a few months ago. I just made her Jewish. Now it’s canon!

That’s a big deal. Stand-up comics, we end up in diners late at night after shows. The other people in those diners are young girls, young people coming out of the dance clubs. I would see young women there in half shirts and sky-high heels. And they’re freezing cold. And they’re shivering. And their feet hurt. I would be in like my hoodie and jeans and just think, “these girls don’t think that they can get love without this insane amount of physical discomfort.” I just wished I could tell them that they don’t have to be uncomfortable to deserve love. Boys are not raised to think that they ever have to sacrifice comfort to be loved. I love that Vanellope kind of sheds light on these grown-up princesses who just want to hang out without feeling uncomfortable.