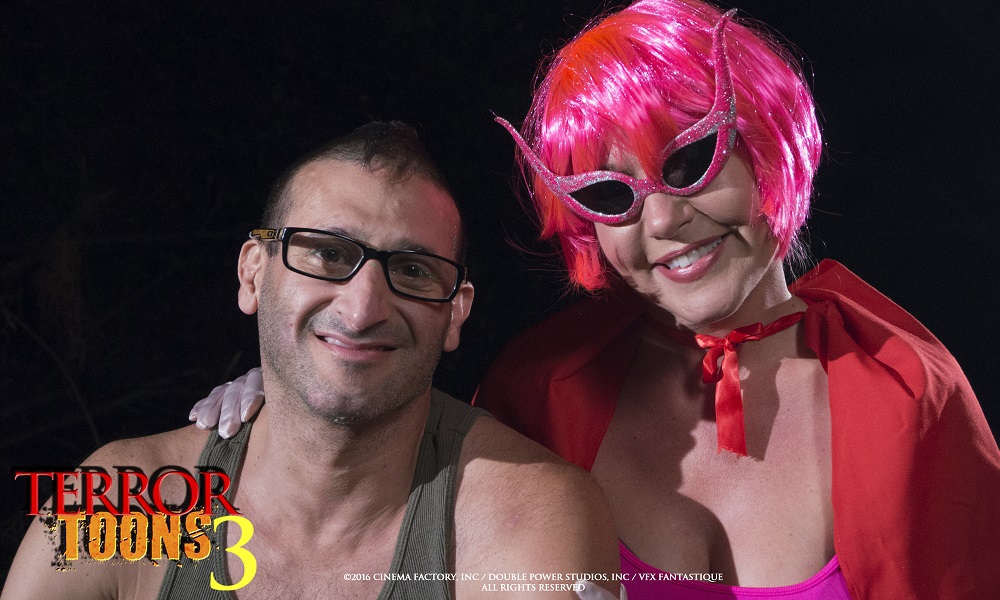 The words “underground filmmaker” are rarely more aptly applied than they are for Joe Castro, a director and special effects artist active in the cult scene. He’s been active in the industry for over 20 years, his work includes such grindhouse fare as The Summer of Massacre, The Hazing, and the Terror Toons trilogy, the third of which was just released this week. In an exclusive interview, he spoke about the project and how underground films are stronger than ever.

Question: What do you think the appeal of films like this are?

Joe Castro: [Laughs]. I think I’ve described it as “what if Adult Swim were a horror movie?” and that’s about the closest descriptor I can get. There’s something about showing extreme horror as an act of absurdity, to switch gears in the middle of the film, and to look at a movie as an experience instead of a story. This movie is all about conveying a mood – a whacked-out, over-the-top, very, very disturbed mood – and yeah, there’s a very specialized audience for that. This is the third one we’ve done, so we’re pretty sure the people who will respond to this movie know what they’re getting into.

Q: What are the advantages to making a film like this on such a low budget?

JC: The fact that you can make it the way you want it. The more money that gets involved, the more people you have to please, and the more the whole thing gets diluted. That doesn’t burn me; movies are expensive, and if you invest your money in one, you have a right to see a return. But doing it lean and tight – being able to do it with a low budget – means staying true to the things we wanted to do with this movie: that we could stay as sick and twisted as we wanted to be, without worrying about some investor wringing his hands about how extreme it all is. It’s when you have to bow to concerns like that that destroys these kinds of movies.

Q: The Internet certainly makes it easier to embrace a kind of free-for-all format like this one.

JC: It does. It helps us get these movies out more quickly too. You’re not worried about finding a theatrical distributer or even getting a video distribution deal. You know you’ll be able to get this movie into the hands of the people who will appreciate it.

JC: It’s is! This is a cartoon, even though we use a lot of live action elements. Cartoons have a plasticity, not only in what you can show, but in the audience’s ability to grasp it. You go back to those old Max Fleischer cartoons, the old creepy ones, and you can really see this dream logic at work. And those Bugs Bunny cartoons from the 40s and 50s. They were less overtly unsettling, but there’s an undercurrent of violence to them.

Our movies are intended to tap into that vibe… not only in terms of the content, but the way everything can change in an instant and send you in a wildly different direction. I think that’s a big part of why people respond to this: you literally don’t know what’s going to happen next! The mash-up – the weird shifts and changes – become completely acceptable in that context. And suddenly, there’s a lot of freedom in what you do.

Q: Any live-action inspirations to all of this?

JC: Well we did cast [director] Herschell Gordon Lewis. The man was a genius, and we drew a lot from his work. The Wizard of Gore, Gore Gore Girls… amazing stuff. David Cronenberg’s an influence too, not only because of his extreme imagery, but because he understood the strange absurdity of horror too. Then there’s stuff you grow up with, which may not be as extreme in terms of gore, but has the same goofy energy you want. I used to watch old Godzilla movies on Saturday afternoons, the old creature features. I like to think that we got some of that DNA into Terror Toons 3.