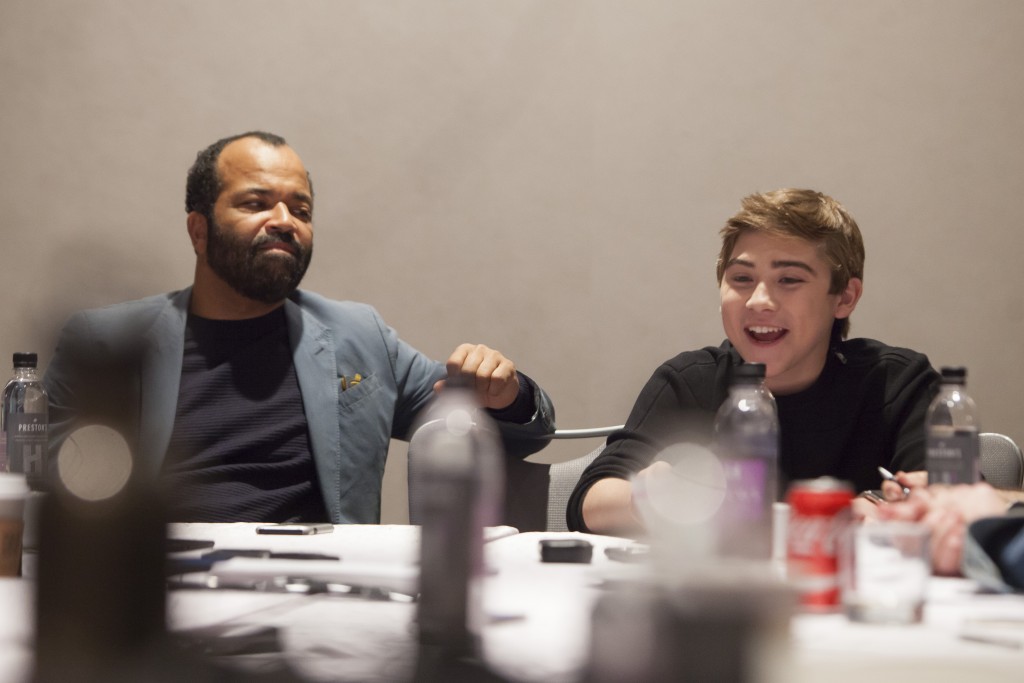 Jeffrey Wright has played everything from Felix Leiter to Colin Powell to a Prohibition-era gangster. His interview partner, Raymond Ochoa, has racked up quite a successful resume as well, with over 45 credits to his name. (Not bad for a young man who just turned 14.) The two of them lend their talents to Pixar’s The Good Dinosaur, which opens in theaters this weekend. They sat down to talk to the press about the project in a recent press day in Los Angeles.

Question: How exciting is it for both of you to be asked to be a part of The Good Dinosaur?

Jeffrey Wright: In that I live vicariously through these things with my children, it was intensely exciting for me because it was so for them. Beyond the popularity of the movies and the prominence that they have for kids my kids’ age, they are really good stories. It’s really become seriously well-considered storytelling. And the themes of this one, which are so universal and fairly obvious around parenthood and family and love and responsibility and nurturing, all of these things are so resonant, so that’s really very gratifying to be a part of. On top of that, it makes me a little cooler with my kids and their friends. The Hunger Games went a long way in that regard, but now a Pixar movie makes me even that much cooler.

Q: What do you think this movie says specifically about fatherhood? Where do you draw a line on trying to push your son to be more than he is and being accepting of him for what he is?

JW: That’s the core issue for my character. In order to understand the emotions and the dynamics of this relationship, I tried to draw on my relationship with my son and my daughter. And it’s a lesson I think that if we’re trying to be responsible parents, we all come up against in our work with our kids. And not just once. It’s a really the central question of what level of encouragement you take or when pushing your kids does more damage than good. HHHHow do you strike that balance between a nurturing posture and one that’s a bit too overbearing? All parents go through that. And so that’s what is so wonderful about this movie, because you are experiencing this movie through the relationships you have through either your parents or your children. So we, as audience members, therefore bring a lot to the table as we’re watching this. I think it’s a fantastic story to take in — for parents to take in with their kids, or for kids to take in with their parents.

Q: For a career that hasn’t had a lot of paternal roles, what was it like to get a call to play something different from what you’ve done before — to play a loving father?

JW: Well, Narcisse [from Boardwalk Empire] had his own expressions of love as well. Maybe not our understanding of what love is, but… [Laughs.]. I tried to choose the next role because of its dissimilarity to the previous. For me, the roles that you choose are reflective of where you are in life. This just made sense, not only because it was so different than Narcisse, but because of who I am right now. I’ve been a parent for 14 years now, and so that begins to inform the choices that I make, not only what roles I will play, but what roles I’m not interested in playing, or even the logistics of not wanting to be away from home for too long, or things like that. So, it’s just a function of growing up, I guess, that these roles are being tucked into my portfolio now.

Q: Tell me how quickly you adapted to creating a character with only your voice to rely on, especially in a story as emotional as this one. I imagine it was a bit of a challenge.

RO: Well, a lot of people asked, “Is there a big difference between voiceover acting, and being seen on the camera,” and I really don’t think there is. When I go into a voiceover booth, it’s not just me just talking in front of a mic, which I think a lot of people don’t understand. I act. I move around and make gestures and things like that. It’s just how I do it, and it makes me be able to bring out more emotion rather than just talking. It brings out more character in it. You can’t go too much, because then the mic won’t pick up on you, so you have your boundaries on it, but it isn’t all that much of a difference.

JW: I enjoy voice work a lot. I do a fair amount of it. Not necessarily animated features, but a lot of narration, documentary narration and the like. The commercial stuff as well. But that’s really irrelevant — I really enjoy playing with the nuances of the voice, and with the breath. I mean it comes from work in the theatre: a very central tool. I think there are challenges, but the challenges are really mitigated by the people that you’re working with. And in this case Peter Sohn was really critical in understanding what needed to be done from a vocal perspective. Because we didn’t see a lot of the film before, working on this, and it was incomplete, but he had such a clear vision, and clearly articulated vision for what this world was, what the details were, what the nuances that were needed for the emotional journey. It was really pretty — it was really extraordinary. So deeply passionate about the work, in a wonderfully child-like way, almost kind of perceiving it, as a director, in the way that a young audience member might. He has a really vibrant, idealistic imagination. It was really very comforting. I’d been in situations on other animated projects where you didn’t have that clarity, and there’s no way that you could know.

It’s not my body, so I’m going to have to trust what’s told to me. And in this case, Peter couldn’t have been more comprehensive and more clear in his direction. It was a really, really wonderful experience.

You are this critical kind of human element, because you are literally breathing, you are giving your breath to the palette of what technology has drawn. But you’re just one element in a huge army of people that were required to pull this off.

Q: Being of a still-learning school-age class, what kind of research and preparation do you do going into a film like this? Did you call on what you’d learned about dinosaurs?

RO: I have great parents and they are so helpful in everything I do, so when I knew that I was an apatosaurus, they helped me on what it actually was. They helped me research facts about what it actually looked like, because I had no idea what it looked like. I didn’t know what an apatosaurus was at the time, but learn those things, and it starts giving you an idea of who the character is. This dinosaur doesn’t look that mean, but, you know, it doesn’t look kid-friendly at the same time either. Are kids going to be scared of it, even though it isn’t mean? You want make it look like and sound like a big dinosaur, but as kid-friendly as you can. My voice was really high at the time, so no one would be scared of that voice.

than an average person who just says lines in front of a thing and being like, “okay, let’s send it over.”