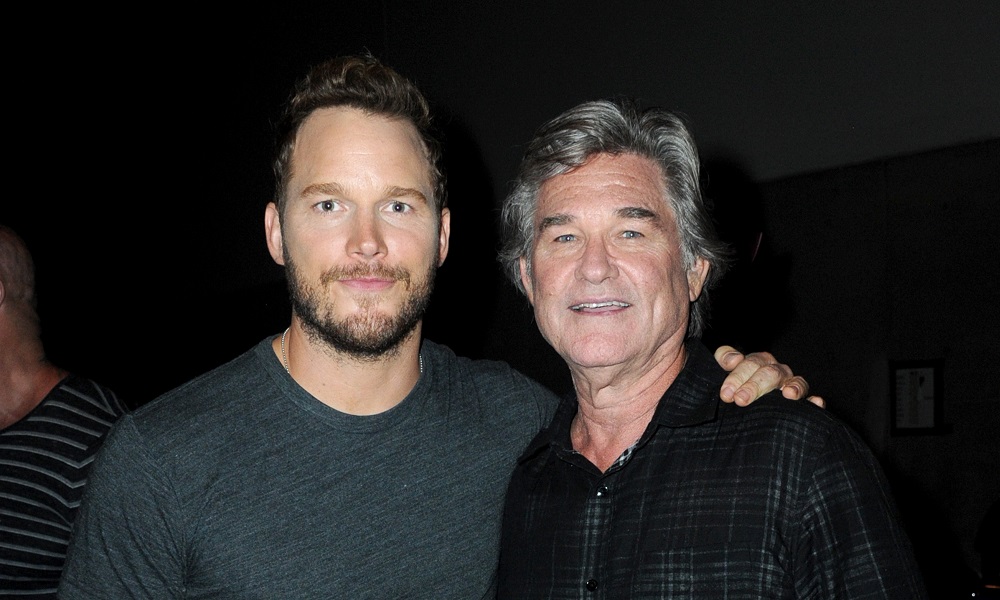 Kurt Russell is a living legend, having spent over 50 years in the movie industry since his feature debut kicking Elvis Presley in the shins at the tender age of 12. Chris Pratt have worked steadily for over a decade, but has hit the top of late: parlaying his scene-stealing role in Parks and Recreation into an A-list career as an action star. He returns as Peter “Star-Lord” Quill in the sequel to Guardians of the Galaxy, while Russell takes on the enigmatic role of his long-missing father. They spoke to the press about the film at a recent junket.

Question: What exactly convinced you to join this ragtag bunch?

Kurt Russell: The truth is that when I read the script I wanted to make sure I understood it correctly. I hadn’t seen the first movie. I’m not much of a moviegoer, though I knew that everybody loved it. And I also knew that everybody all of a sudden decided that I was going to be in it. I was doing Hateful Eight stuff, press day stuff like this, and all of a sudden, boom, boom, boom, boom, my phone goes off, and the people around me are saying, “Are you gonna be Star Lord’s dad? Are you gonna be Peter Quill’s father?” I just was like “Guys, I don’t really know what they’re talking about.” Then I saw the first movie and I immediately started getting it. I also immediately started wanting to do it.

That was immediately followed by concern. Everybody loved the first movie. You don’t want to make them not like the second one, right? So I hit myself with pressure. I told James that. I said, “I don’t want to mess this thing up, so I need your help.” Luckily, he knew what he was doing.

Q: Chris, how was it working with Russell? How did you step up in the face of someone with such a legacy in this town?

Chris Pratt: One of the benefits of my position is that from time to time, if you’re lucky, you get to work with someone like Kurt Russell. There’s this thing that happens, like you promised yourself you’re not gonna do every time you meet an icon, someone that you’ve known way longer than they’ve ever known you. And you promise yourself you’re not gonna geek out, but it’s a little inauthentic if you don’t, because if you just go in there like, “oh what is it, Kurt? Hey, nice to meet you. Chris.” If I do that, I don’t acknowledge how much I love him and what a fan I am. If you don’t get that out of the way, then it feels a little inauthentic. So I think I did that immediately, and it doesn’t really take that long to tell someone that you really love them, you really respect their work, and for them to go, “thanks.” And then, that’s it. At that point, you move forward and there’s this really cool thing that happens next: probably the one thing I never would’ve imagined when I first moved to Hollywood. The greatest part of it, the biggest secret is that you become somebody’s friend and somebody’s peer rather than a fan. And that’s really nice, and I think Kurt and I have become friends. We connected on a lot of things outside of just the movie. I also have his cell phone number and I’ll give it to each and every one of you…

Q: One of the better effects in this movie is actually one of the quieter ones: making you look like the way you looked in 1980…

KR: That was pretty interesting. I didn’t really think about that a lot because you just assume that they have all the trickery in the world to make that work, right? Dennis Liddiard’s been my makeup man for 28 movies, and we assumed that it was gonna be all CGI. Dennis said to James and the cinematographer, “I can young this guy down. I got some tricks in my bag. Would that be helpful?” And they said, “yeah, as much as you can. That would be great.” I was speaking to the gal last night who does the CGI. She said, “what did you think of what we did?” And I said, “I thought it was great. But I understand you didn’t do a whole lot.” She said, “no we didn’t. We just touched it up here and there. He did a fantastic job.” He does have a lot of tricks, not just makeup. Cosmetics I should say. I hate giving away tricks, but you have to create an impression, not an image. And there’s stuff that goes into that. And you want them to look certain places and not look other places. And then when you’ve got the help of modern day technology, I think it’s a much more natural look than either make-up alone or CGI alone.

Q: you’ve been part of the Disney family for so many years. What’s it been like coming back to the company like this?

KR: I feel like I do have a special relationship with Disney, but the truth of the matter is, every time you go to work, you got to make the team. It doesn’t make any difference what movie, what television show, whatever it is. You have to go in there and hopefully make them feel good about the decision they made to hire you. That’s just the way it is. You can’t walk in there and go, “hey, I’ve done a bunch of stuff! You’ve all seen it, haven’t you? So we’re good, right?” You’re only as good as your last at-bat. So I just wanted to make the team. I wanted to be helpful, wanted to be good, and I was very, very fortunate I ran into a team that had a terrific manager. James really knows this world. He also knows how to execute. He has cast these people perfectly. Perfectly. And it was gonna be hard for me to measure up to that, I knew that. I asked him a lot of questions. I think drove him a little bit nuts.