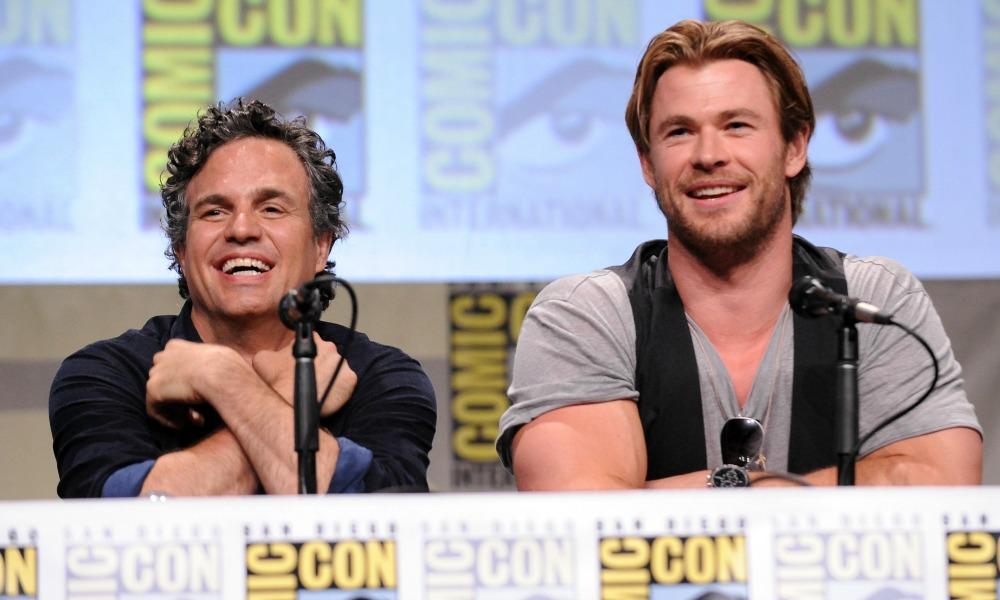 Chris Hemsworth and Mark Ruffalo have been key parts of the MCU for many years. After working steadily in smaller parts and Australian television for many years, Hemsworth found his signature role as Thor, Marvel’s redoubtable God of Thunder. Ruffalo worked largely in independent film while taking a few larger projects like 13 Going on 30 and Zodiac. He joined the MCU in 2012’s The Avengers, taking over from Edward Norton as Dr. Bruce Banner and his giant green alter-ego. The pair get a rare showcase in Thor: Ragnarok, which covers (among other things) where their respective character have been over the last two years of MCU history. They sat down at the recent junket for the film to talk about it.

Question: What makes this Thor different from the others?

Chris Hemsworth: [Director] Taika Waititi, basically.  I think we all had a vision, and an idea, and a want to do something vastly different than what we’d done before, and take this side of the Marvel universe to a different place.  And that meant kind of doing away with what we knew, and just reinventing it. That all came from his crazy, wonderful brain, and his inspiration, and him pushing us every day on set, and constantly encouraging us to improvise, and explore, and take risks.  It was one of the most enjoyable experiences I’ve ever had on a set, and a film that I feel the most proud of, just because of this whole team, and the collaboration, and the fun we had.

Q: Mark, this is the first time we’ve seen the Hulk this much. Are you interested in all in doing a full Hulk movie?  And if so, what aspect of the character would be most interested in exploring?

Mark Ruffalo: I would love to do a Hulk movie, and I think we all would love to do one.  About a year ago, before I even had this part or were talking about doing this film, Kevin [Feige] asked me to come over and have a script meeting.  He basically said, “What would you like to do if you had a stand-alone Hulk movie?’  And I said, “I’d like to do this, this, and this; and this and this – and then this.  And then this, and this, and this, and then it would end like this.”  And he replied, “I love that. Let’s do that over the next three movies, starting with Thor 3 and carry it on through Avengers 3 and Avengers 4.”  And so that’s my stand-alone Hulk movie.

Q:  We hear a lot more dialogue form the Hulk now than we ever have before, at least in the MCU.  What was that like for you hearing that?

CH:  I loved it.  I think, this is my favorite version of the Hulk because we actually got to act together, you know?  We’d only really fought one another on screen in the previous films.  And this time around, we got to just improvise our way through it and sort of invent this chemistry that we hadn’t explored before. We got to build this new version of the Hulk, which was a little bit more articulate and vocal than he had been prior. The kind of Hulk you’d seen in the comics and maybe some animated films, but that we hadn’t seen in the movies before.  There’s just so much more room for the humor, and, and fun that the character then embodies, that – I think it’s fantastic. I loved it.

Q: Did you miss having your hammer as kind of a prop?

CHL It took some getting used to.  No, I mean, it was sort of good.  It just helped to shed anything too familiar.  Holding the hammer, or even the wig in the previous costume, certainly just put me in a place, and set me on a path of what I already knew.  And I wanted this to be unfamiliar – not only because we wanted to do something different with this one, but because the character has to deal with so much that’s completely unexpected. So everything from the hammer, to the costume, to the hair… all of it made me feel different. It forced me to move differently, it forced me to make different choices about how I presented Thor. That was a great thing.  And I don’t really miss it, no.  I’ve got one at home. It’s in the toilet, actually. Ceremony.