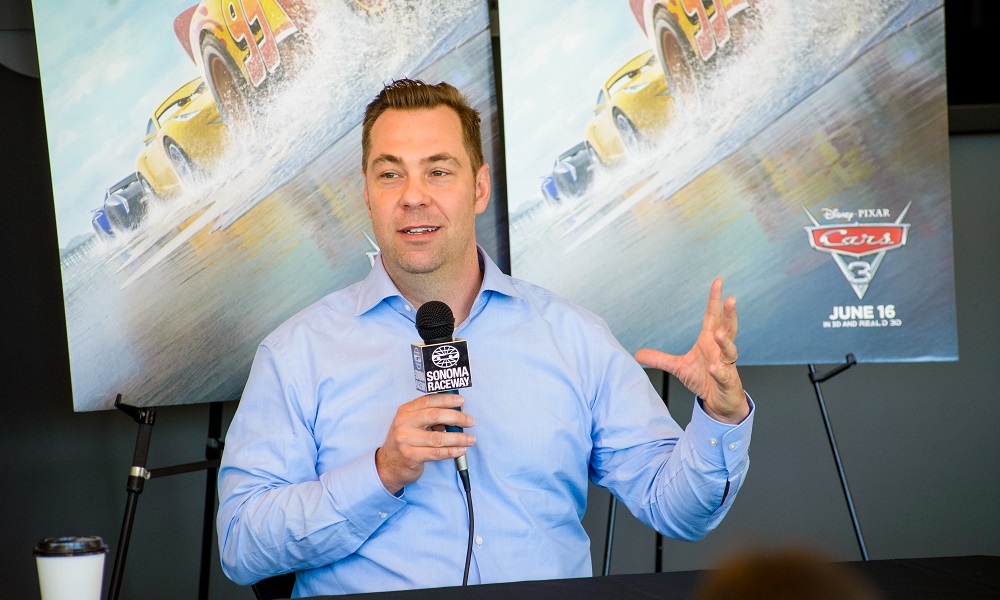 Like most Pixar directors, Brian Fee got his start apprenticing: working as a storyboard artist for the likes of WALL*E, Monsters University, and Ratatouille, as well as the first two Cars pictures. He makes his directorial debut with Cars 3, bringing the trilogy to a conclusion. He spoke about the project at a recent junket for the film.

Brian Fee: The only time in animation when you can improvise a little bit is in the recording booth. That’s the moment we get to play. Stand-up comics like Cristela and Lea are perfect for that. So is Nathan Fillion and actors who have good improvisation skills. The only time we go back and change the animation – the only time we make that change – is to capitalize on some bit of magic that happens in the recording booth while we’re riffing and improvising.

Q: You included the Humphrey Hop in this, which is a pretty obscure bit of Disney-ana. [Editor’s note: it appeared in the 1956 short In the Bag.]

BF: My parents had cable TV when it was still relatively new, and that included the Disney channel. The Humphrey Hop showed up in an episode of House of Mouse. It’s just one of those things, a childhood favorite. I don’t think a week has gone by in my life where I’m not humming that song in my head. It’s just one of those things where you kind of realize, “hey, I’m directing the movie! I can do whatever I want! I want the Humphrey Hop in there!” I’m glad somebody else noticed it.  I thought that was just for me.

Q: Paul Newman’s voice was a pleasant surprise too. How did you manage the trick of bringing Doc Hudson into this movie without recasting?

BF: John Lasseter kept the mike open on Cars 1 and we had hours and hours of wonderful material from Paul Newman. The Newman’s Own foundation, which controls the rights to his voice, was terrific from Day 1. They knew how much respect we had for his contributions, and that we weren’t just doing as a stunt or a gimmick. We didn’t undertake it lightly. But this is a movie about getting older and passing the torch, and we needed Doc Hudson there to make it work. We were really fortunate to have enough material from him on the first film to find exactly what we needed.

Q: How did you hit on the specifics of the ending?

BF: In true Pixar fashion, we tried everything we could possibly try to end it. We make the movie many times during the course of production. And little by little, it was always inching towards that ending. The end result is what’s on the screen, but it’s part of the process.

This was an important movie for me personally, and not just because it was my first. I’m inspired by being a parent, and by realizing the wonderful things that come with that. In this movie, Lightning finds out that he was the most important thing in Doc Hudson’s life. I had that scene with my kid when I realized how important being a father is. It’s important in terms of general transitioning from one generation to the next, but it’s also important as far as what we can do as parents. What barriers we can break through to help them? It’s a universal story, but it’s that personal connection that makes it so strong.