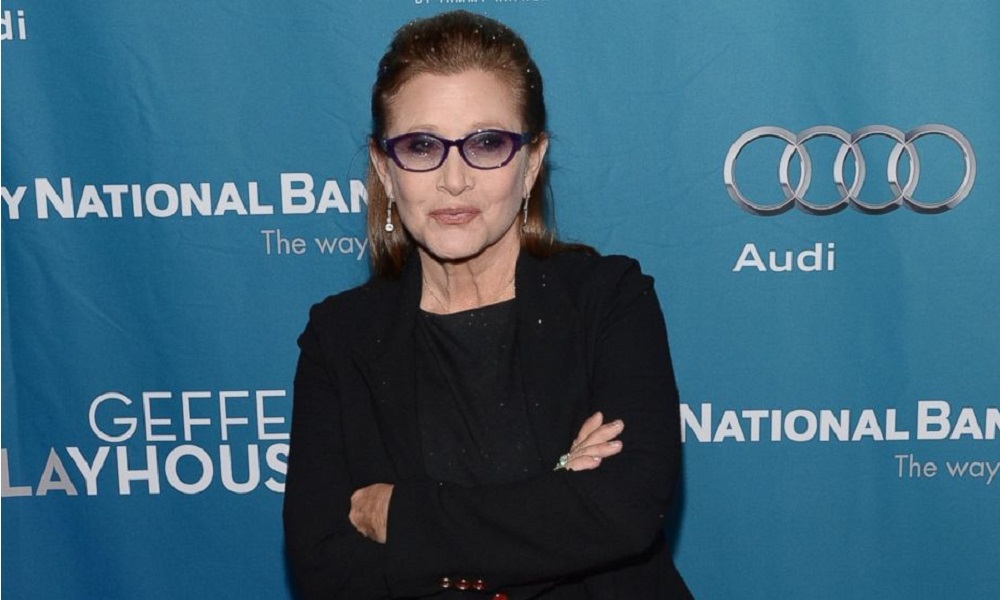 If you don’t know who Carrie Fisher is, you’re at the wrong site. The daughter of Hollywood royalty, she rocketed to fame – quite literally – at the tender age of 21 after being cast as Princess Leia in the original Star Wars. She reprised the role for the two iconic sequels, all the while rewriting the script on how her life was supposed to go. A 30-second marriage to a rock star, well-documented troubles with substance abuse, and the weight of a figure like Leia pressing down on her… she beat it all with a self-deprecating wit and a devastating sense of humor. Along the way, she reinvented herself as a talented author – penning such works as Postcards from the Edge, Surrender the Pink and Wishful Drinking – as well as making memorable onscreen appearances in like likes of The Blues Brothers, When Harry Met Sally and the first Austin Powers movie. As you’re probably aware (and if you aren’t, congratulations on escaping that rock you were trapped under), she reprises her role as Leia in the much anticipated The Force Awakens, opening Friday. She spoke to the press about the experience at a recent junket for the film.

Question: We’ve seen over the years what a sense of humor you have, and yet Leia is such a serious woman. Do you think she has a humorous side that we haven’t seen before now?

Carrie Fisher: She would have to, wearing those hairpieces. I’m sporting a baboon-ass hairstyle in this one. And I mean that with love. [Laughter.] You need a sense of humor for that sort of thing. It keeps it lively and fun when you’re getting shot at.

Q: Where those hairpieces trouble? How about the rest of the costume? How long did it take to get into it all?

CF: About 10 minutes. I’m older and I do it faster. I have a kind of classy gas station attendant look, so that doesn’t take long to put on. Or I could say it was an airplane repair mechanic’s smock, with a nice vest over that. And different hair than most airplane mechanics would normally have. I don’t mean the baboon-ass hair. It’s other. The end.

Q: What was the scariest moment that first day of production?

CF: Bad memory. Literally. I couldn’t remember my lines. That was scary. I’m the custodian of Princess Leia, so never got out of character, and I wondered if that would be noticed. It wasn’t. [Laughter.] No, but I was very nervous. Just it’s been 40 years for other people in the cast. And I don’t like looking at myself at this age in a large way – an IMAX way – so that was scary, and remains so.

Q: Many of the other actresses in this film cite you as a role model growing up. How have you seen things change for your gender on set between the first trilogy and this one?

CF: Well in the first one, I got to be the only girl on the all-boy set, which was really fun. I got to put things in their drinks and stuff like that. We drank through the whole trilogy in the beginning. This was a sober set. That’s what J.J. [Abrams] brought to this: sobriety. Girl power back then was a little different. I had to scream more. I was louder than them, so that gave me a measure of physical power, and then I screamed at them until they passed out. That’s what’s really fun about doing anything that girl poweresque: bossing men around. You didn’t get to do it much in the 70s. I know a lot of you women out there haven’t done that yet, and I encourage you to do so: later this afternoon.

Q: These movies have become a generational thing, with fans of the first trilogy taking their kids to it and millennials who watched the prequels as kids now coming back to this new film as adults.

CF: I find that it’s really a family experience, and I think it always has been. I’ve had people over the years come up and say, “I’m showing this to my child, that I didn’t want to wait till they were 6, so I went with 5.” You watch your children watch the movie and you learn something about your children, and you ask questions like, “will we like the same characters?” and Halloween becomes kind of more of a Thanksgiving experience, without the turkey. You see all these pictures of entire families dressed as the characters for Halloween, or for Comic Con, and I find that so moving. Sorry. But I do.