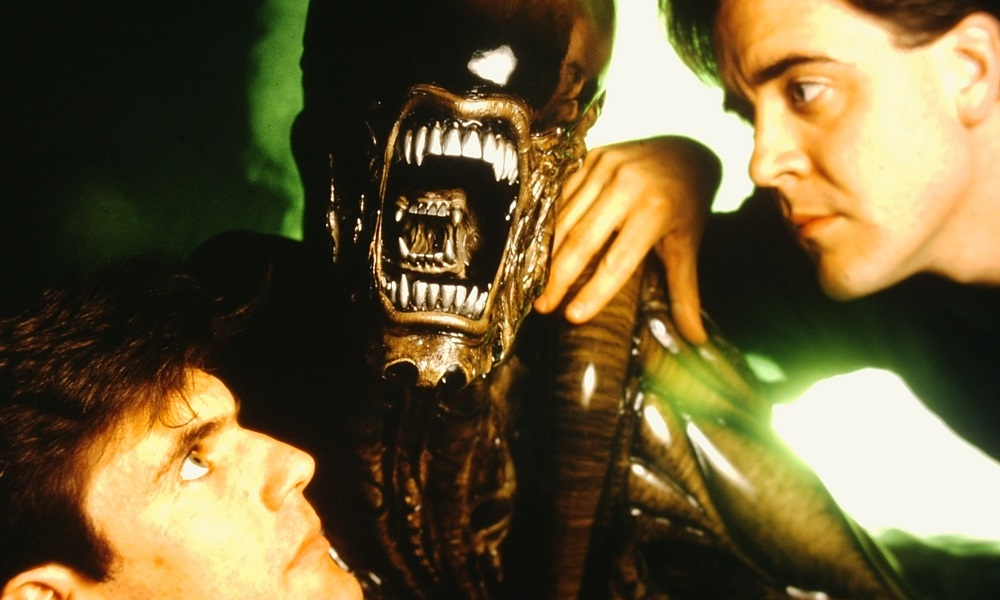 You may not know Alec Gillis and Tom Woodruff Jr. by name, but you certainly know their work. They began their careers as effects artists at Roger Corman’s New World Pictures, where they got to know James Cameron and Gale Anne Hurd. That landed them spots in Stan Winston’s legendary team, and since then they have worked on the likes of Aliens, Tremors, Mortal Kombat, and Jumanji. They won Oscars for their work on Robert Zemeckis’s Death Becomes Her. Their latest work can be seen in The Monster, a nifty little horror film currently available on demand . In an exclusive interview with The Sci-Fi Movie Page, they talked about their work on the project.

Question: How did you get into this field? What kind of movies inspired you?

Alec Gillis: For us, it was the fun of make-up and the fun or that kind of Halloween feeling: dressing up as spooky monsters. And then just realizing that there was this world out there where you could do that. There was this place called Hollywood that made monsters, and you could go make monsters with them if you were lucky enough. I think the movie Alien, in particular, had a huge influence.

Q: For Monster, what was the basis of the creature design? What were you looking for when you set out to make this monster?

Tom Woodruff, Jr.: What was cool about this is that we didn’t have to obey the dictates of logic. For most of the monsters we do, there needs to be some biological impetus at the core. The monster has to come from some planet or world somewhere and follow certain rules as far as its size and shape goes. This monster is purely psychological. The monster is a metaphor for the dysfunctional relationship between the mother and the daughter in the film. We thought it was a great way to create something demonic and unreal. The director envisioned it almost as a blank slate, as this kind of formless shape. Black, shiny, defined only by the glint from its wet body. With the kind of lighting this film was using, that could work very well: letting the audience do your work for you by filling in the unseen details. He had a concept that this creature was in great pain all the time, and wanted us to add tear ducts so it could cry. Most of this is material for us instead what ends up onscreen. But those details lend the resulting monster a sense of reality.

Q: What’s the state of practical effects in the industry today and how does practical impact the designs you work on?

TW: We always build the characters, the monsters, with two things in mind. One is the impression is gives on camera: the impact it’s going to have. The other is practicality. How does it move? How flexible does it need to be? How can we protect it from water and the elements?

TW: A movie like The Monster is actually a blessing in that regard because it’s on a smaller budget. Big budget films tend to want to solve every problem with CGI. Less money means fewer options for what we can do, but it also focuses us on those options we do have available and helps us do the best work we can within those parameters. With The Monster, the budget was such that we were likely looking at a man-in-a-suit model, so we focus on that. It has its limitations as a technique, but as Alec said, it looks more real. That means a lot in a horror movie. The uncanny valley will bite you if you’re not careful.

Q: How much do you guys do early on with the script and the story to inform the monsters you create?

AG: It’s as important to understand the creature element as it is for an actor to understand his or her character. We need to know what the monster needs to do in the story in order to get an idea of how we’re going to achieve that in the final model. If the monster is going to run out of the woods and pounce on a character, that’s going to be different than if it’s going to swing out of the trees. In our case, we want to give the creature some kind of visual compliment to what it’s going to be. Hence the black, glistening skin here, the sense of a nightmare brought to life.

The Monster is currently in theaters and available on demand.