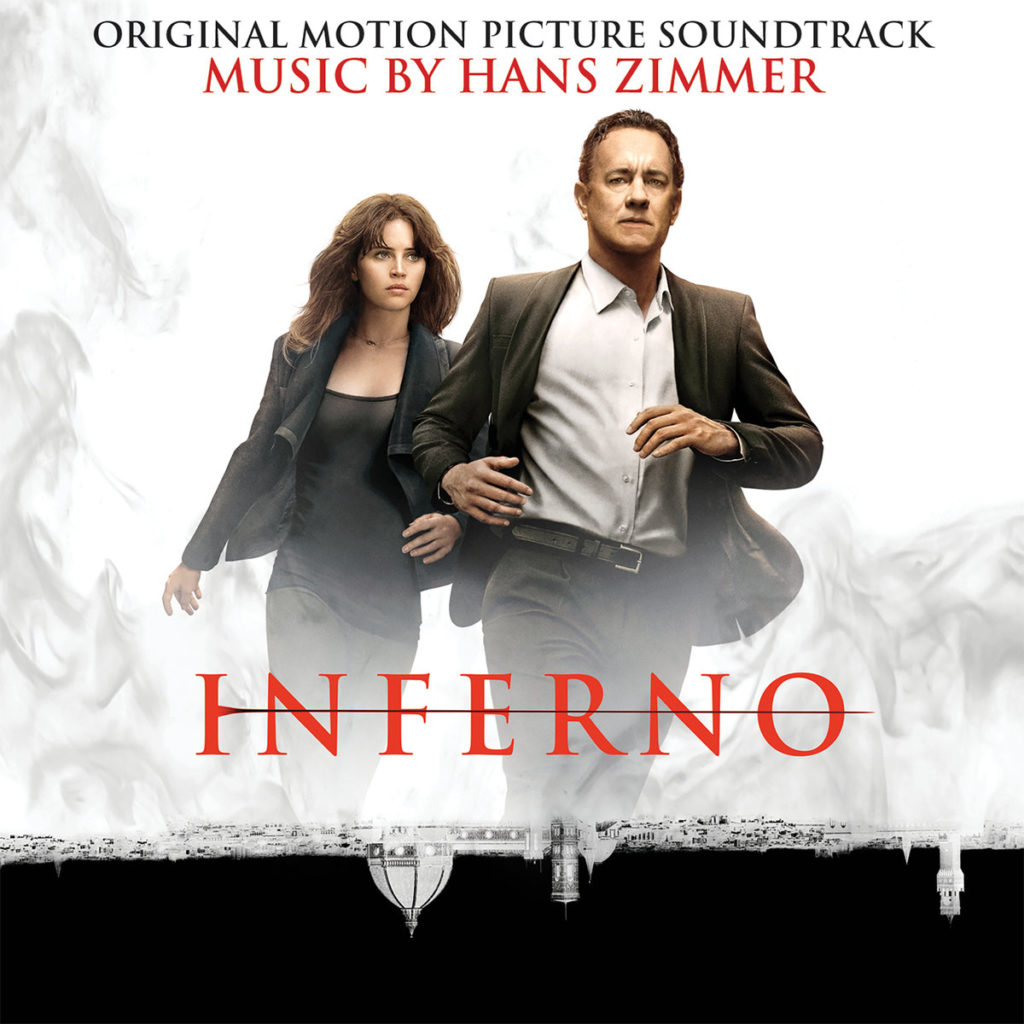 With more than 120 films to his credit, Hans Zimmer is a force in the movie score genre. When he announced that he would no longer compose music for Superhero films, having done at least 6, fans gasped in horror for Zimmer had become synonymous with the likes of the Superman and Batman. I won’t lie, I was in that fan base, too. However, I started to realize Zimmer has a huge body of work that has nothing to do with capes and cowls. Take his work on Sherlock Holmes, Pirates of the Caribbean, and his, now, trilogy of Dan Brown scores. It is his work on the latest Dan Brown  novel to be turned into a film, Inferno, which brings us here today.

With Hans Zimmer, I knew what I going to get would be nothing short of spectacular. It’s as if you are buying a wine purely because of its label. I listened to the score first, instead of seeing the movie and then listening to the music. What I found, without the visual storytelling medium, was an intense mystery, a race against time, and that Robert Langdon’s theme (or shall we call it The Da Vinci Code theme?) isn’t a crutch for the composer to lean on.

“Vayentha” (Track #8) is that aforementioned theme that Hans Zimmer has used for the previous two Dan Brown films. I was surprised to see that it did not appear in the score to almost at the halfway mark. It’s Langdon’s theme and one of a true hero. It appears in the film at the right moment as well, when Langdon has complete use of his facilities, signifying a change in the story’s outcome.

“The Cistern” (Track #12) is a particular favorite of mine in this score. Zimmer pounds at the audience with an intensity that is so fast it should be unbearable. Yet, the underlined strings keep moving us forward. It’s as if the heavy beats are time and Langdon is the strings moving just fast enough not to be smothered.

This is the first “action picture” for Zimmer after his announcement that he is done with the Superhero genre. What I noticed as a fan of his work and that of his collaborator on the Batman v Superman: Dawn of Justice sore, Junkie XL (see review), is how Inferno has very similar themes and tones. At one point I even thought that the score had ended and my iPod switched to Junkie XL’s Mad Max: Fury Road score. “Seek and Find” (track #4) sounds like Mad Max, yet in this film, it is when Langdon is trying to piece together his memories of the last 24 hours. In short, it works, ten fold.

Zimmer is a force in the movie score genre. As recognizable as John Williams and Danny Elfman, his work transports us to the high seas, the deepest mysteries, and catapults the most intense visuals to the tenth power. He is a true master of his craft and his Inferno score stands tall.

10.  Doing Nothing Terrifies Me

13.  Beauty Awakens The Soul To Act

16.  Life Must Have It’s Mysteries