Home Invasion stars Natasha Henstridge of Species fame as a woman whose posh home comes under attack by a group of professional thieves. Chloe and her stepson Jacob are spending the evening in their home with a family friend. Chloe’s friend is shot and killed when she goes out to confront the mask-wearing strangers in the driveway. Chloe and Jacob soon find themselves hiding from a trio of thieves who have invaded their home. The thieves are led by Heflin (Adkins) and his somewhat unstable girlfriend, Victoria (Zagorsky). 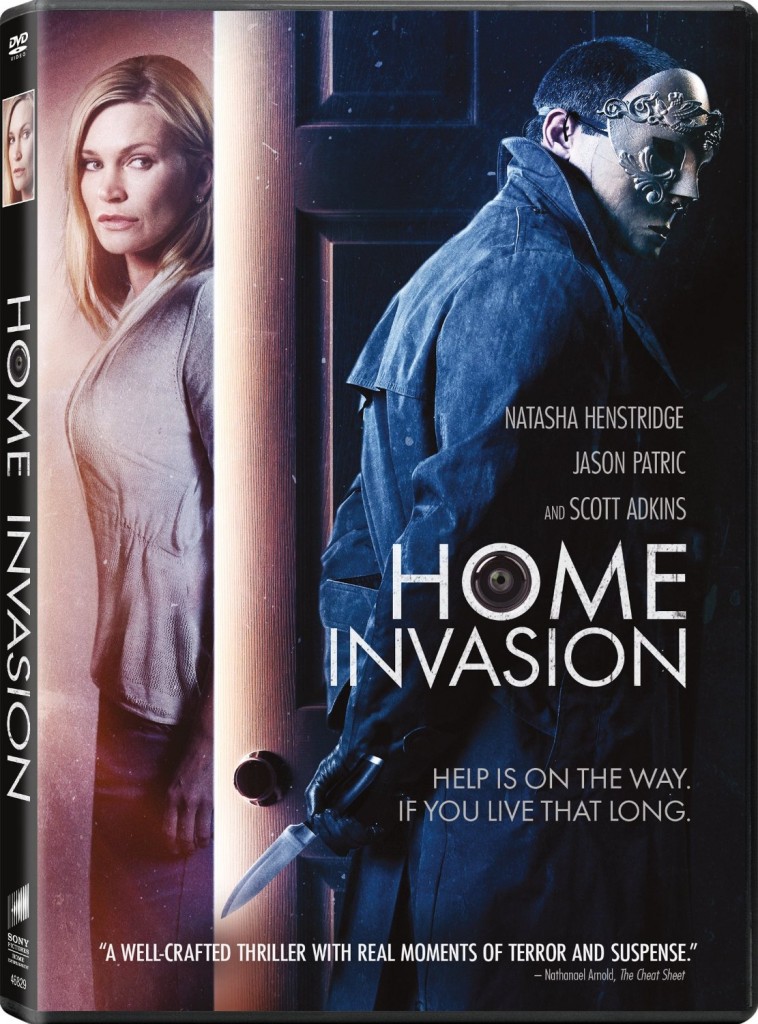 Chloe’s only contact to the outside world is to Mike (Patric), the agent for the home security company who monitors the house. Fortunately the home is outfitted with top of the line security and while the thieves take out most of the cameras, there are several more hidden camera’s that allows Mike to be able to observe the entire situation, and guide Chloe and Jacob away from the intruders to sage points in the house.

Meanwhile, the police are trying to get to the scene but are stalled by a malfunctioning swing bridge which is the only way to reach the home on the tiny inlet where it is located. In actuality, the bridge was taken out by a 4th member of the thieves who is making sure help cannot reach the family. It soon becomes known that the thieves are after a hidden safe in the home and Mike must somehow lead Chloe and Jacob out of the house and to safety until help can arrive.

Home Invasion is a decent thriller although wildly unbelievable as it follows Murphy’s law to the fullest extent. Everything that can go wrong does. The only deputy who lives on the inland cannot be located; the helicopter is grounded due to a heavy storm; the only boat is not available. And of course none of these scenarios were planned on by the crooks and they become a happy coincidence for them. But that’s a good thing because this is one bungling group of baddies. They spend nearly as much time arguing amongst themselves as they do trying to find the safe and make a getaway. Speaking of which, with the bridge out and law enforcement piling up on the other side, waiting to cross, how exactly were they expecting to make their getaway? And Chloe, a normal everyday wealthy housewife manages to get the best of presumably more skilled Victoria.

Most egregious of all is the fact that we never learn what exactly they are after in the safe. It’s stated that Chloe’s husband stole something but what is left a total mystery which is rather unforgivable consider the lengths that the thieves went to try and locate and open the safe. But even with all the blemishes that Home Invasion has it still manages to be mildly entertaining, mainly due to the performances of Patric as the calm and collected security rep, and Adkins as the chief bad guy. Even Henstridge is serviceable in her role as the threatened mom.

Home Invasion is essentially a mash-up of “Panic Room and “The Strangers”, two films that are far superior but if you’re stuck for something to kill 90 minutes you could do worse.