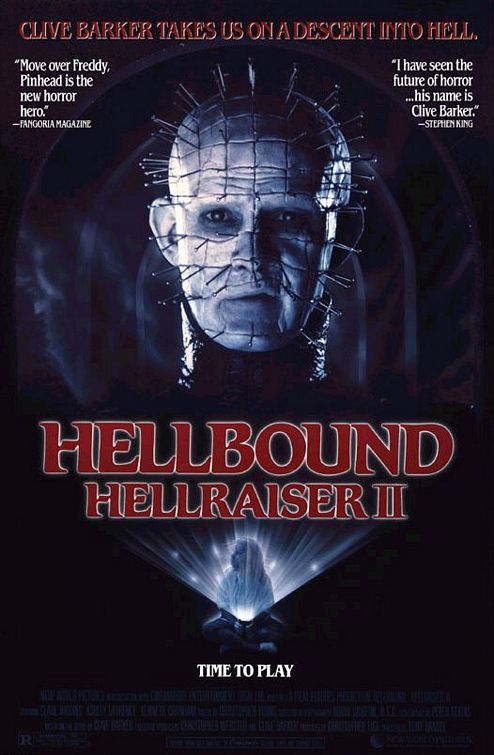 Hellbound: Hellraiser 2 may not fall on the radar of your average moviegoer. Most people will never know the terror or pleasure that waits for them in that tiny box. It is a brutal, thrilling, and a terrifying ride straight into Hell. When it comes to sequels that surpass their originals Hellbound: Hellraiser 2 belongs in the same category as The Empire Strikes Back, Terminator 2: Judgment Day and the Bride of Frankenstein. It delivers the same ride, but tells an entirely new tale surpassing the original.

There was always something about the Hellraiser films, the first two anyway, that make the stories feel as if they were real, as if Hell really is filled with such characters. This was a horror film to experience at home, played out on dirty old VHS tapes and feeling like something we weren’t supposed to watch. Nothing better reiterates this feeling then Dr. Philip Channard (Kenneth Cranham) walking us through the psych ward of his hospital, a real chamber of horrors that actually exists somewhere in our world. It’s painful, but true.

Why Hellbound: Hellraiser 2 falls into that very special category where the sequel surpasses the original is tricky. Is this because the story of the Cotton family is over? Perhaps it is because the characters that everyone wants to know more about, the Cenobites, actually have their origin told in the sequel. A change from the standard origin told in the first film motif. The Cenobites even get to play the good guys, for a brief moment. Perhaps it is the unexpected real horrors of the psych ward that truly terrify us like the Cenobites did in the first. Regardless of the reasons, this film is more fun to watch than the original.

Sequels are always tricky. The audience wants the exact same thing they saw the first time but an entirely different story as well. Studios also feel they have to take it up a notch and add a lot more bang for the buck. If we look way back the best sequel which accomplished these two criteria has to be James Whale’s classic the Bride of Frankenstein (1935). It is both thrilling and scary, but never takes itself too seriously. The audience is out for that fun ride but at the same time would have screamed bloody murder if it would have been the same movie. Hellraiser 2 is that kind of film, only slightly more scary.

Watch this one with all the lights turned out.

Hellbound Hellraiser 2 may not fall on the radar of your average moviegoer.

Hellbound Hellraiser 2 may not fall on the radar of your average moviegoer.