In Hell Fest, a group of friends get VIP tickets to a horror theme park name “Hell Fest” where they find themselves stalked by a masked killer that they at first mistake for one of the park’s actors. Natalie (Amy Forsyth) arrives at the apartment of her best friend, Brooke (Reign Edwards), and her roommate Taylor (Bex Taylor-Klaus), with whom Natalie does not get along. Joining them for the trip to the theme park is their various boyfriends and Gavin who may or may not, be Natalie’s boyfriend…this film never really decides that character development is that important. 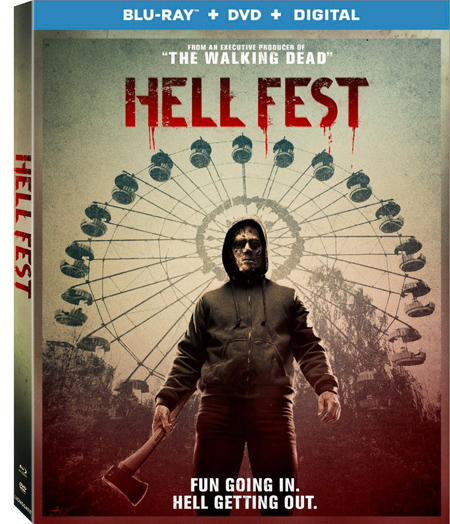 A mysterious visitor we see only from behind but is apparently recognized by the park’s ticket seller, also arrives, and soon dons a mask to begin stalking the group throughout the park’s various attractions. Natalie is the first to aware that the man isn’t just a park employee but an actual threat. The killer, known as “the Other” is able to isolate the friends, one by one, using the park’s props and mazes to his advantage. Clearly he seems familiar with the park although, that doesn’t seem to make sense since the park is described as a “traveling” theme park. You’ll know what I mean when you get to the end.

Hell Fest has the feel of a 80s style slasher film and it never tries to step outside of that path. That works both for and against it. On one hand it is strictly by the numbers and offers nothing new or interesting to the slasher/horror genre. But it is competently made and fairly well acted by the cast. Amy Forsyth is the likeable lead who you know is ordained to make it to the very end.

It certainly seems as though the original 1978 Halloween was a heavy influence on Director Gregory Plotkin. We have a mysterious, masked killer, a small body count…by slasher standards, and its only moderately gory. But Plotkin isn’t nearly as skilled at building suspense as was John Carpenter. In fact there are surprising few “gotcha” moments in Hell Fest. As noted above there is appallingly little character development. Natalie and Taylor have a long-running feud which is never fully explained and thus adds little to the story beyond being filler.

Hell Fest is worth a view for fans of the slasher genre but breaks no new ground.

The only extra is a 20 minute making of documentary which is decent but has spoilers so you definitely want to watch the film first.