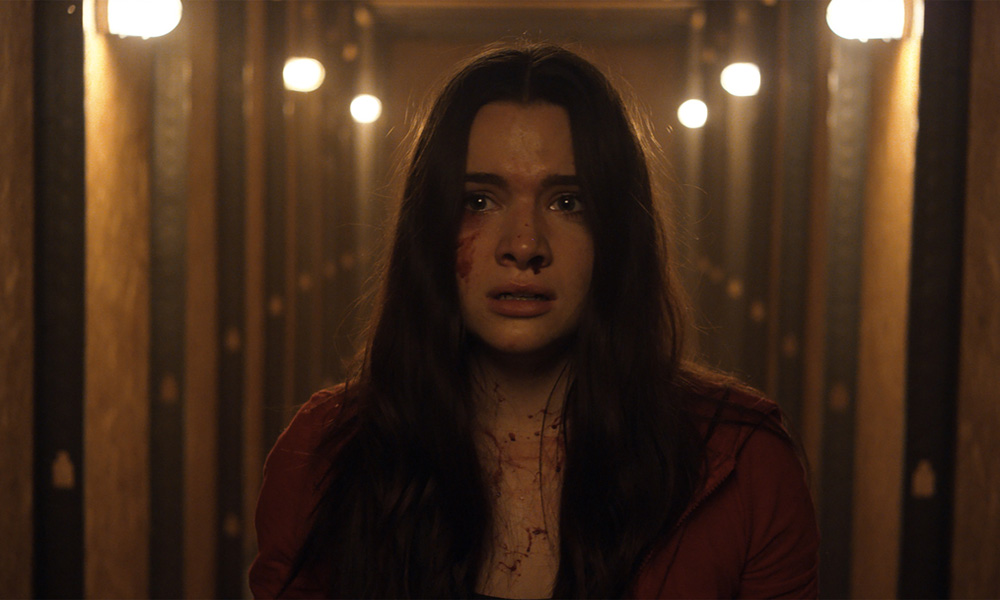 Stop me if you’ve heard this one. 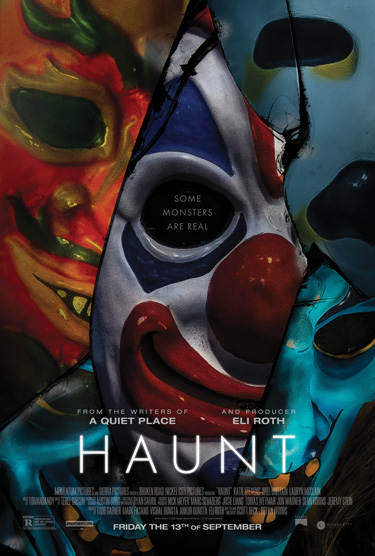 A group of chatty college kids go out partying on Halloween and end up on a backroad traveling to a hitherto unknown haunted house. Their night of kicks will end up quite different from how they pictured when things become far too real. It only makes sense I suppose something produced by Eli Roth would feel like every other movie the director/producer has made. I was amused by the credit ‘From the writer of A Quiet Place’…a movie principally known for having very little dialogue.

This is as generic as you can imagine. The characters here you’ve seen so often before Haunt almost feels like a throwback period piece, from the ridiculously stock costumes (I’m not talking Halloween costumes I mean the teenager’s clothes) to names like Harper, Mallory and Bailey.

Cabin in the Woods already deconstructed and sneered at these cliches, but here they are years later played completely straight. It’s either admirable in it is commitment, foolhardy in the desire to be hip, or so blatantly ignorant of changing times it just had no idea what to do if not something completely derivative.
The writing is beyond laughable. Statements are made that are supposed to be clever, but come across as awkward or unintentionally silly.

“Do you know how I know he’s an alcoholic?” one character snaps. “Because he’s an alcoholic!”
Some of the writing seems almost intentionally goofy. A character dressed as a doctor keeps talking about medical issues and concerns about health and safety. During one beat a seemingly ominous figure arrived…and started speaking in a completely unassuming way, grumbling about his job. Even as a bait and switch it made me laugh. Someone sees backwards lettering but cannot read it without using a small handheld mirror AND saying the words aloud.

If you included more pratfalls and less gore you’d literally have a comedy here. It is NOT helped by the gore all being digitally created. I realize we’re seeing some horrific events here but when they look so fabricated and they don’t have the beneficial charm of practical effects work all you can really see is the easiest sequences of the movie where an actor reacted on a small set and perhaps months later a digital artist added the blood and carnage. Given there’s some incredible makeup work here the dearth of non-CGI morbidity is strange.

There’s a bit of freakiness to experience here, especially if you’re frightened by people in masks who don’t say anything while they’re up to mysterious business. There’s also a LOT of jump scares so for a contemporary horror community supposedly satisfied with only this distinction, here you go.

Towards the conclusion things get madcap, gross, but so overblown even if the slower burn section had lured you into the mystery the finale seems to promise that some impossible events just sort of happened for reasons you’ll never fully understand anyway. No harm done if that was the intention to heighten some kind of impending franchise, but there’s not enough to distinguish Haunt’s merry band of frighteners from other similar and far more iconic psychos. Even the idea of a ‘real’ haunted attraction is nothing new to the genre, from classics like Freakshow to modern examples like The Houses October Build. There’s a weird attempt to emulate escape rooms at one point as well.

Unfortunately for Haunt this too is already well-trod ground. Evil clowns? Nothing new. Death cults? Get them twice a week. Innocent protagonists confronting their pasts through mirrored but unrelated horrific events? Alfred Hitchcock already plumbed that well. Evil disfigured hillbillies? Tobe Hooper, years after his death, still can’t be topped.

The acting is fine. Cinematography fine. It’s all just so…workmanlike. Actually compared to a lot of other horror films this one is pretty tame. There’s no nudity, only sporadic swearing, and the deaths are over relatively quickly. It sort of feels like a video game the way that the protagonists negotiate the rooms and traps, gather weapons, confront bosses.

Haunt might be much more effective if you haven’t seen any other horror films, especially pioneers of the genre. Then you won’t be able to call every single spot you see, from when the loud noises will happen to what would be the most obvious payoff to a seemingly innocuous line of dialogue. To me I could follow the line of reasoning of a typical writer of movies to determine what would happen and exactly when. Logical events do not follow internal logic of the fictive universe so much as things happen to facilitate the wishes of the screenwriter, and I tend to consider this poor and obvious writing.

But it’s built to be a crowdpleaser with thrills, chills, ironic reciprocation and a plot ultimately so simple you could write it on a napkin with room to spare. This is all just another ‘horror’ movie with horror stuff happening to horror music. No deeper meaning or purpose than another spooky flick to ride the desire for audience baiting films, probably on Halloween.

For what it is, Haunt is perfectly functional, but it would be like calling a hamburger fine dining to declare it anything above this. If ‘horror’ has a consumer grade store brand, this is what it looks like.