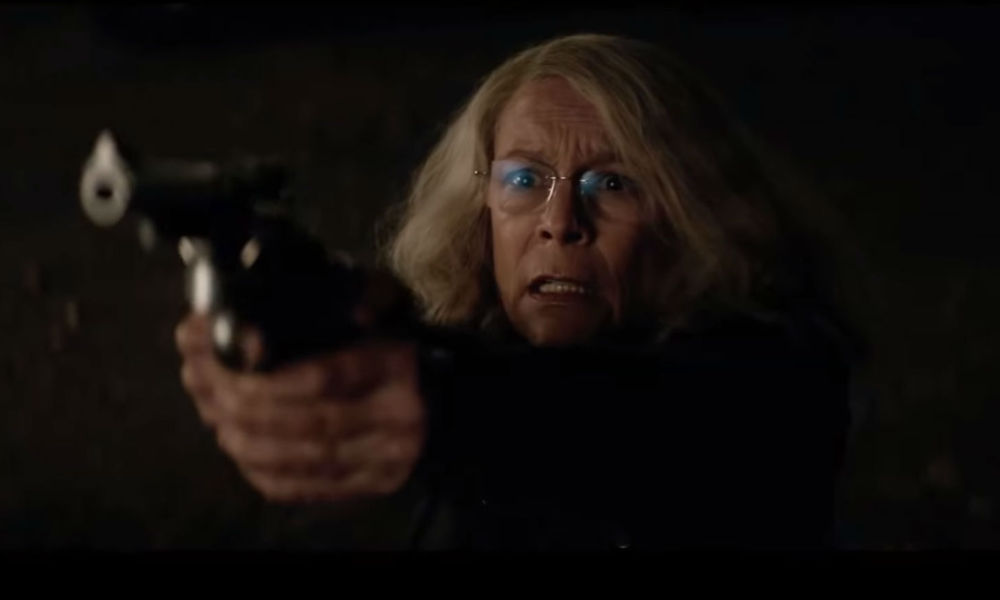 If we’re being completely honest, the Halloween franchise never had any business getting this far.  Beyond the canonical original and the marvelously oddball outlier Season of the Witch, the remaining films are uniformly forgettable. The 1978 Halloween was perhaps the ultimate cinematic campfire story requiring nothing more than our willingness to be frightened to work. That masterpiece stemmed a cumbersome line of sequels and remakes, none of which came close to the dark magic of their progenitor.

Now comes a new Halloween, devoid of any subheaders in the title and promising great things unseen since the franchise began. To prove it, it offers Jamie Lee Curtis returning to her iconic role as Laurie Strode and a revamped score co-authored by John Carpenter himself. It also features a strange pedigree in Blumhouse Productions and an intriguing creative force in director/co-writer David Gordon Green   (along with fellow screenwriters Danny McBride and Jeff Fradley). And it’s riding a LOT of buzz into its release this weekend.

On the balance, the results justify the hype… provided you never presume to compare it to the original. That’s actually harder than it sounds. Because it understands how the original accomplished so much – something no other sequel since has quite been able to manage – comparisons become very easy… and a tad unflattering.

Technique is the name of the game here, as well as a bold simplification of the franchise’s mythology and a means of jumping right into the action without having to sit through multiple hours of turgid Halloween also-rans. It dispenses with every notion save those from the 1978 film. In short, Laurie isn’t Michael Myers’ sister and never was. The franchise’s signature maniac was recaptured sometime on November 1, and returned to the asylum where he’s remained ever since.

Laurie, meanwhile, still grapples with psychological fallout of that night. She’s walled herself off in a compound outside Haddonfield, IL – completed with panic rooms, floodlights and a locker full of guns – and waited for that silent hulk in the asylum to break out again. In the process, she’s ruined a couple of marriages, estranged herself from her adult daughter (Judy Greer, nailing it) and given her precocious granddaughter (Andi Matichak) a reasonable streak of paranoia.

What follows is an eerily similar repeat of the original film’s plotline, as Michael escapes and various flavors of Strode deal with it. It relies heavily on visual cues from the first movie too: from free-range lunatics wandering in the rain to Michael in his coveralls and white mask stalking unseen through streets full of trick-or-treaters. The youngest Strode girl and her friends make suitably vulnerable targets (one of them is even babysitting) and once again an obsessed doctor (Haluk Bilginer) follows in the killer’s wake. (Curtis actually refers to him as “the new Loomis” at one point.) The inevitable showdown at Festung Laurie gives the beats a new wrinkle, but otherwise, the playbook is unmistakable.

That actually works to the film’s credit. The new Halloween finds its joys in the specifics of its revamped scenarios: rendered with the same elegant tracking shots that made the first film so eerie and relying on mood (aided by the terrific score) rather than violence. It’s gorier than the original, but there’s a subtle wit to it as well: a way of defying our expectations often enough to give the basic killer-on-the-loose notion a sense of freshness. The cast throws themselves gamely into the proceedings as well, with Greer delivering the film’s signature moment with a veteran’s aplomb and Curtis delighting in her older, harder Laurie. Had Green and his cohorts attempt to expand on these basics, the whole thing would have collapsed. But by explaining less, they do so much more, and regain some of the atmosphere and tension of the original in the process.

Michael himself makes a big part of that. He was never a character so much as a plot conceit: a faceless automaton whose motives were utterly beside the point. By attempt to embellish that or explain it way, previous sequels fell flat every time. This Halloween learned valuable lessons from their failure. Michael’s personality and motivations are utterly irrelevant here, and become all the scarier for it. He’s back where we found him, “inhumanly patient” as Loomis once described him and waiting silently for just the right moment to strike again. He needs no other reasoning, and the shocking randomness of his new escape reminds us of the simple fear of the unknown that the franchise lost along the way. (He’s even played by the original Michael, Nick Castle, though he shares credit with James Jude Courtney.)

That’s enough to put it well ahead of the pack as far as Halloween movies go, though its obvious aping of its progenitor keeps it from stepping out of Carpenter’s singularly long shadow. If nothing else, it makes prep work easy (watch the ’78 film and then jump right into this one) and the way it delivers on the same spooky premise makes a fine diversion this season. I’m not sure we could have expected much more from it, and while I REALLY wouldn’t advise cranking out another one, we can stop and enjoy what this one has to show us.  It’s the first in almost four decades that actually seems to know what it’s talking about.