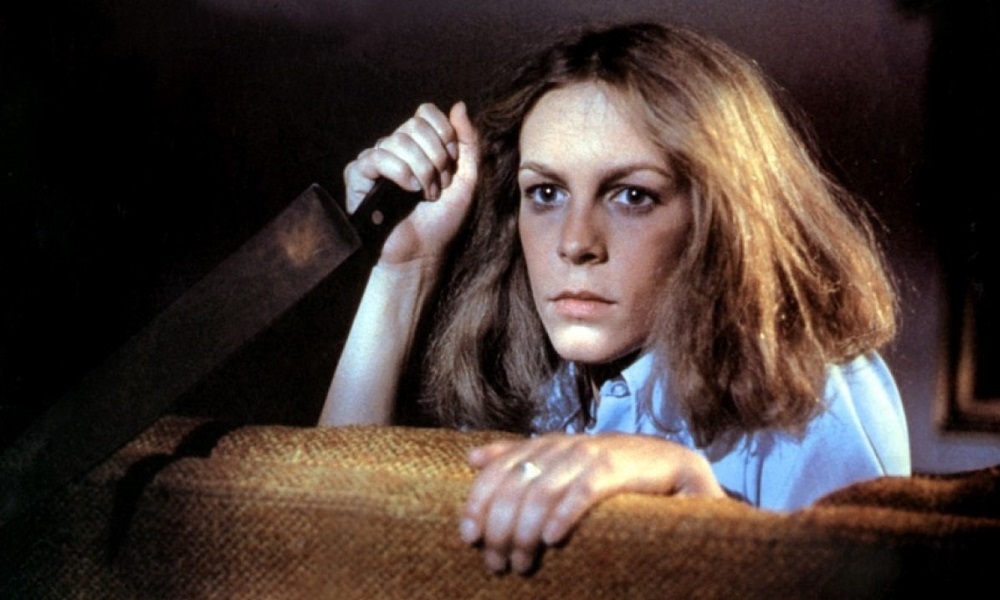 YOU CAN’T KILL THE BOOGEYMAN: A REVIEW OF THE REMASTERED HALLOWEEN (1978) SANS SPOILERS

CineLife Entertainment partnered with Compass International Pictures and Trancas International Films to bring a restored and remastered digital print of John Carpenter’s Halloween (1978) to select theaters from September 27 through October 31 of 2019.  Originally released on October 25, 1978, this horror classic was selected by the Library of Congress in 2006 to be preserved in the US National Film Registry for “its importance to American movie and cultural history [because it] ushered in the dawn of the slasher film [and is] uniquely artistic [and] frightening.”  Technically, the ingeniously crafted Halloween wasn’t the first slasher movie—that honor goes to the British psychological horror-thriller film Peeping Tom (1960)—but it did define that horror subgenre (by providing it with a kind of Campbellian monomyth) and start a craze for it. 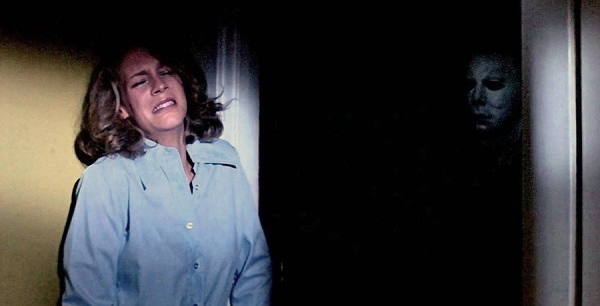 This seminal and mega-successful movie came from humble origins.  On a budget of only $100,000, Carpenter wrote, directed, edited, and scored the “urban Western” Assault on Precinct 13 (1976), which impressed film producer Irwin Yablans so much that he approached him to make another low-budget exploitation film—one about a madman stalking and murdering babysitters at night—as the first release for his new company Compass International Pictures.  The budding auteur thought it “a horrible idea [but] wanted to make more movies” and so agreed to co-write and direct it for $10,000 and 10% of its profits along with his name above its title.  He was promised also “final cut” privilege (authority over the version to be released for public viewing) if he stayed within the production’s absurd shooting schedule of 20 days and meager budget of $325,000. 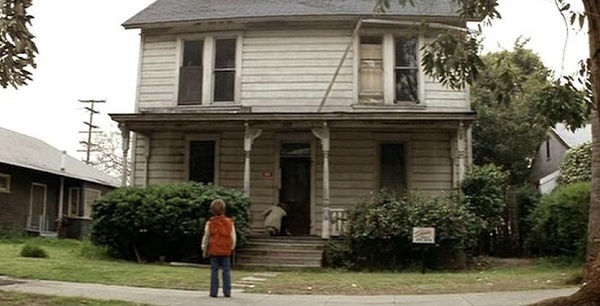 And he did.  But despite these constraints—and initial negative reviews and low ticket sales—Halloween became, via word of mouth, a sleeper hit both critically and commercially, with admiring reviews from the country’s major critics and a worldwide gross revenue of $70 million ($47 million domestically and $23 million foreignly).  And the movie’s extreme success (becoming the seventh highest-grossing movie of 1978) and extraordinary profitability (providing a 21,538% return on investment, the seventh-highest of all movies of all time) brought it “the sincerest form of flattery”: imitation.  Over the following six years—a period later labelled the “Golden Age” of slasher films—over 100 similar movies were released.  (And those don’t include the science fiction classics Alien (1979) and The Terminator (1984), which have slasher film elements.)

Not surprisingly, the vast majority of those movies—even/especially those in the phenomenally financially successful “Friday the 13th” series—are garbage that pandered to the lowest common denominator with copious gore, gratuitous nudity, and subtextual misogyny added to story elements copied from Halloween (e.g., a past wrongdoing on a certain date, disregarded warnings, a masked maniac stalking and slaughtering party-hearty teens or young adults, and a serious “final girl”).  The late, legendary film critic Roger Ebert condemned these “movies that systematically demean half the human race [as] gruesome and despicable” while extolling Halloween for keeping its audience’s sympathies with the victims rather than the murderer and having been “directed and acted with a great deal more artistry and craftsmanship than the sleazebucket” imitators.

And Halloween’s Grand Guignol imitators not only lack its “artistry and craftsmanship” but apopheniacally ascribe to it the moral equation “(premarital) sex equals death.”  According to Carpenter, he wasn’t “making some kind of moral statement [but rather] viewed the characters as simply normal teenagers.”  But despite his goal being “to scare the audience[, nothing] more than that,” he (probably unconsciously) did make a movie with social relevance and resonance.  Originally released in the middle of a then-inexplicable decades-long violent crime wave (now known to have been caused by lead poisoning) and the year serial killer Ted Bundy committed his last murders and was finally caught, this “crass exploitation” film about an escaped madman can be seen as an allegory for middle-class America being blindsided by random, impersonal violence. 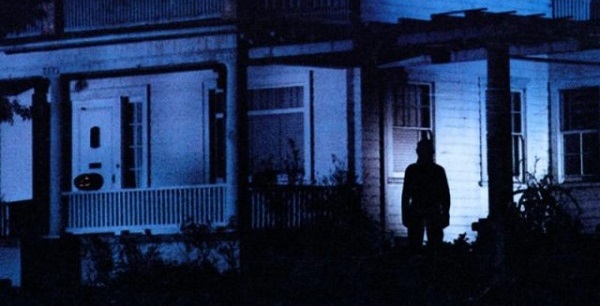 In it, middle-class America is epitomized by the fictional small town of Haddonfield, Illinois and senseless violence is embodied by Michael Myers, a homicidal prodigy who, at the age of six, commits his first murder there on Halloween night in 1963 (soon before the violent crime wave induced by leaded gasoline emissions began) and returns 15 years later.  Producer/co-writer Debra Hill “wanted a Midwest, sleepy town [which doesn’t] have a huge police force [and y]ou think nothing could go wrong there[, but e]very town has a secret, every town has that lore of something that went horribly wrong with it.”  And so she based it upon (and named it after) her hometown in New Jersey.  She also wrote most of the dialog for the teenaged girls who live there, making them likable, sympathetic, and convincing human beings instead of mere cannon fodder. 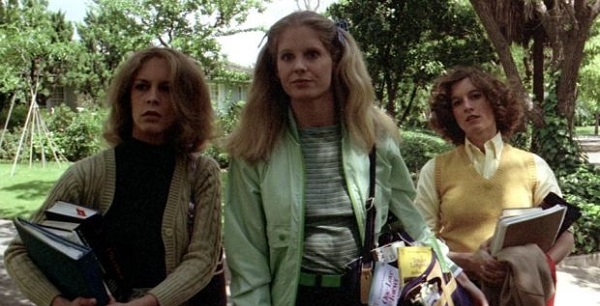 A 19-year-old Jamie Lee Curtis played one of those girls, the bookish and demure but likable and capable Laurie, in her movie debut.  Hill had suggested casting her for cheap publicity because her mother, Janet Leigh, had played the victim in the infamous shower murder scene in Alfred Hitchcock’s Psycho (1960).  (Incidentally, Roger Ebert favorably compared Halloween to Psycho, which was released just months after Peeping Tom, making it the second slasher film.)  Furthermore, Donald Pleasence’s character, Sam Loomis, was named after the boyfriend of Leigh’s character in that movie.  Dr. Loomis is a psychiatrist committed to keeping Myers locked up permanently in a sanitarium because he’s “purely and simply evil.”  And the English Pleasence’s diction and demeanor give his histrionic portrait of an inhuman murder machine complete credibility. 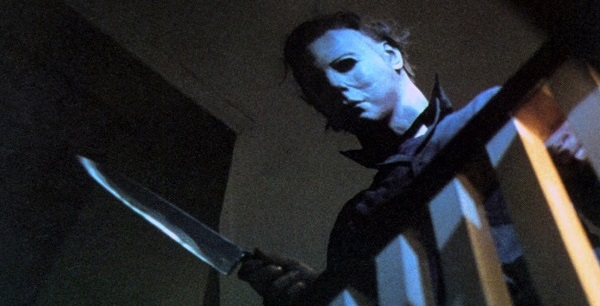 Of course, Myers completely and credibly fits that description with his robotic gait, mechanic coveralls, and “uncanny valley” Halloween mask.  Created from a cheap William Shatner-as-Captain Kirk mask by stretching it out, altering its hair, spray painting its face a ghostly bluish-white, and enlarging its eye holes, it’s a chilling caricature of Loomis’s description of him as having a “blank, pale, emotionless face and the blackest eyes, the Devil’s eyes.”  But Myers’s unstoppable evil is naturalistic rather than Satanic.  His victims aren’t sacrifices for the hedonistic excesses of the ’70s but instead casualties of a cold, meaningless universe for doing the wrong things in the wrong places at the wrong times.  Via misfortune, Laurie becomes associated with his old home, her friends with her, and all of them with his first murder victim.

This is shown in the section of the movie in which Myers prowls his hometown on All Hallows’ Eve, infringing upon its bourgeois normalcy and security, before pouncing on his prey that night.  Drawing upon both the “Master of Suspense” Alfred Hitchcock and the master of restraint Howard Hawks, Carpenter creates terror counterintuitively in the generous geometries of a Midwestern town and an anamorphic widescreen frame.  All the open spaces and comforting suburban elements provide not freedom and security but places “the evil” can watch from, hide within, and spring forth from, in the drab daylight as well as the impenetrable night.  And the long and creeping tracking, panning, and POV shots and Myers’s unexpected and intermittent appearances create in the audience hypervigilance, the feeling that Myers is always around, watching and waiting. 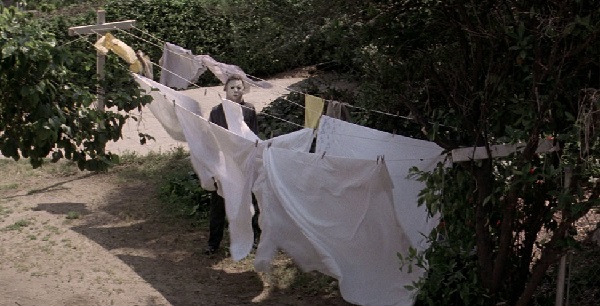 Contributing to this slow but incessant buildup of tension is the mute Myers’s heavy breathing (like a cross between Darth Vader’s and an obscene phone caller’s) and Carpenter’s iconic background score, without which Halloween didn’t impress studio executives.  Sounding like a hybrid of the plinking “Tubular Bells” in The Exorcist (1973) and the primal main theme of Jaws (1975), it’s morbid, fatalistic, relentless, and minimalist, just like the monster and the movie itself.  Less provides more also in that the bare-bones plot gives the film intense focus and the micro-budget gives it a cinéma vérité feel, with its Panaglide-stabilized hand-held shots and suggesting more than showing of bloodshed.  But less is even less by today’s standards, and so Halloween, even digitally restored and remastered, is now just pretty good instead of excellent.

But it could be improved to very good.  Shot in Los Angeles County in spring rather than upper Central Illinois in fall, the film features painted fake leaves thinly sprinkled on the ground, trees full of green leaves, and even some palm trees.  CGI could fix this as well as add a bit more blood, as modern moviegoers have higher tolerances for the shedding of it.  They have also lower ones for waiting, and so Halloween’s slow burn now feels like a spring thaw, even with a 91-minute running time.  Trimming some shots would fix this, and adding two extra scenes made for the TV version during the production of Halloween II (1981) would keep the running time up: the scene in which Dr. Loomis is shown Myers’s room after his escape and the one in which Laurie and a friend talk at her house about the strange man they’ve seen in their neighborhood.