Anton Yelchin, in one of his final roles, stars as a member of a punk rock band who has to fight for their lives against a group of Neo-Nazi skinheads in the horror/thriller Green Room. Yelchin plays Pat who along with Sam, Reece, and Tiger, form the punk rock band the “A’int Rights”. The fledgling band takes a gig in Oregon at a club frequented by skinheads. After finishing their set, they’re preparing to load their equipment to leave. Sam leaves her cellphone in the club’s green room where acts wait their turn to take the stage. When Pat goes to retrieve the phone he walks in on a murder scene as club regular is found dead with a knife in her head. 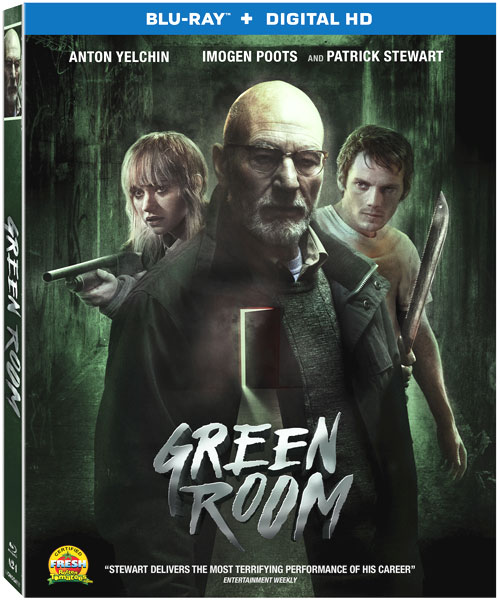 The club’s bouncers quickly force the band back into the room along with Amber, a friend of the murdered girl. One of the bouncers remains inside to keep an eye on the group while the manager claims that he is contacting the police to straighten everything out. In reality he calls for the club’s owner Darcy (Patrick Stewart) the leader of a local Neo-Nazi group. The band manages to overpower the bouncer and get his gun. Darcy tries to negotiate with them to get the gun back but the bad soon realizes that Darcy and his men have no intention of letting the group out alive.

The group desperately searches for a way to escape the room but even if they do they face a group of a dozen or so armed skinheads and trained attack pit-bulls. Darcy, however, is trying to keep their deaths controlled so he can provide a plausible excuse for the police.

Green Room’s strength is in its simplicity of plot and its disparity of factions. It is a simple us vs. them in the most savage way and for the highest stakes imaginable. And make no mistake about it; this film is savage in its sheer brutality and violent kills. Characters are hacked to death, mauled by pit-bulls, disemboweled by box cutters, and have their faces blown off with shotguns. It is not a film for the squeamish. Director/Writer Jeremy Saulnier threatens to upend things by adding needless plot twists but quickly manages to get things back on track.

A brutal horror film isn’t a genre you would normally associate with either Yelchin or Patrick Stewart, ironically both alums of the Star Trek franchise. Yet both bring their unique talents to their characters. Yelchin brings his calm, quiet, understated disposition to Pat, the defacto leader of the band once the crap it’s the fan. And Stewart is commanding yet calculating as the skinhead boss whose motto is “It’s not a party it’s a movement.” He’s devoted to his cause so much that he goes to astounding efforts to make sure the band’s deaths are staged so as not to have any blowback on him or the group. Also a joy to watch was Imogen Poots as the punk fan who overcomes the shock and terror of her friend’s murder to help the band fight off her former associates.

The film also features a frenetic and thunderous punk rock soundtrack that enhances the film’s amped up pace and action. Bloody and brash, Green Room is 95 minutes of angst and blood!

Into the Pit: Making Green Room (9:58): Saulnier and his cast discuss the film, story, and difficulties of shooting quickly in the inclement woods of the Pacific Northwest.