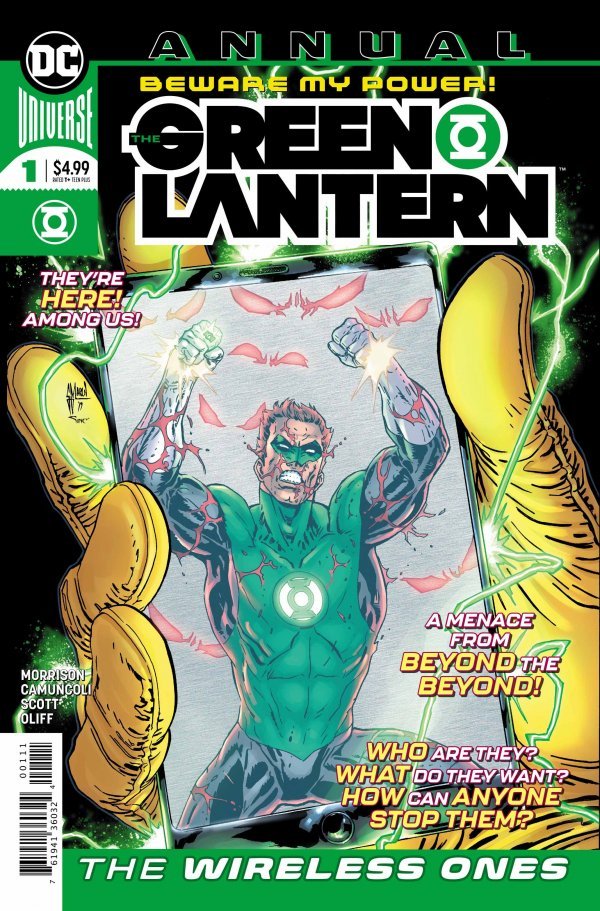 Featuring a demoralising dialogue-driven narrative which focuses far more upon internal family squabbles and worsening “sex lives” than it does depicting even a semi-followable super-hero story-line, Grant Morrison’s “The Wireless Ones” is hardly the “you must not miss” publication “DC Comics” advertised it as being in July 2019. Indeed, considering that this thirty-seven page periodical’s premise is bemusingly based upon an agitated extra-terrestrial taking advantage of Uncle Hip spiking his relatives’ punch in order to film some juicy gossip for a “web project”, it’s arguably hard to imagine a less compelling reason to pick up such a tediously weighty tome and read it.

Of course, that doesn’t mean that this “Green Lantern Annual” is not without its merits, as the apparent return of both the radio-wave based species, the Kwyzz, and Howard Jordan Junior’s garishly costumed alter-ego Airwave certainly inject its unimaginative plot with some much needed pizazz and plenty of frantically-paced action. However, even two such welcome guest appearances from the Burbank-based publisher’s zany past doesn’t help this comic make any more actual sense as its titular character is somehow prevented from talking to his ring by the blue fuzzy “radio police”, and the mere presence of the Justice Leaguer’s young “sidekick” seemingly allows the villainous Zzyptzz to transform into a veritable monster of terrifying transmissions; “You defeat my enemiezz — Now I are free. Today we reclaim the world which izz ourzzz!”

In fact, the vast majority of this ‘reborn tradition’ struggles to provide any literary logic whatsoever, with the Scottish author penning Hal making a miraculous recovery from his painful debilitating inflictions just in time to thwart an alien invasion, courtesy of being visited by the ‘ghost’ of a microwaved Helen, and Airwave’s ability to cancel his opponent’s frequencies being fuelled by the argumentative nature of his persistently squabbling elders. To make matters worse though, at the adventure’s conclusion the one-time reanimated member of the Black Lantern Corps demonstrates an ability to readily reconnect Jordan with his power-ring, and ensure an emerald-energised satellite system sends their fizzing foe into space on a repeated feedback-loop. Luckily, this solution allows the freshly-arrived diminutive Radio Lantern of the Unseen Sector to make a timely arrest, but additionally begs the question as to why Junior didn’t terminate the interference crippling “Uncle Hal” at the start of the long-winded battle and simply save this book’s audience such a soul-destroying, strength-sapping slog…