Gotham-Wrath Of The Villains: A Review Of Season 2, Episode 16 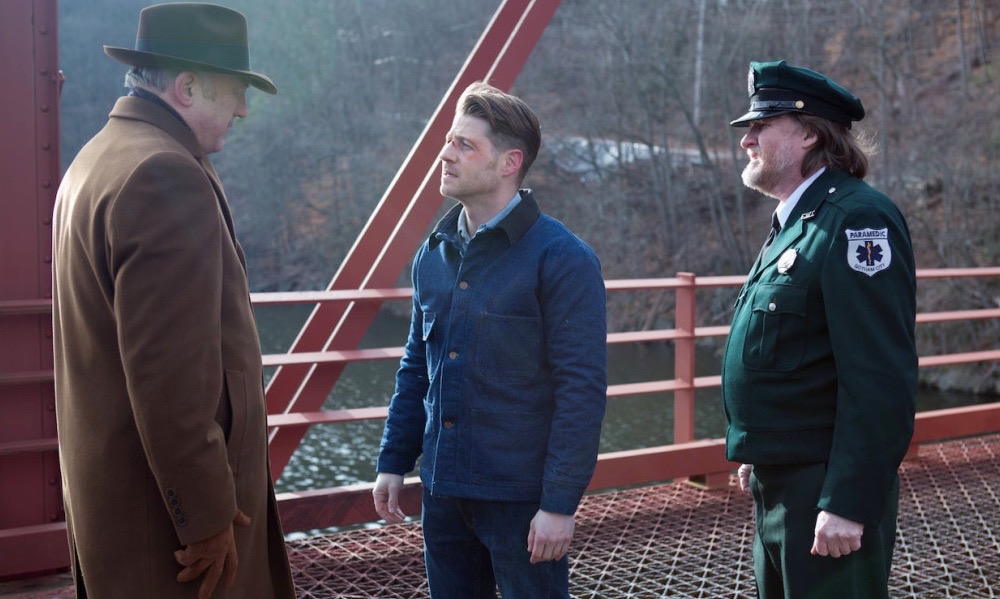 Penguin and Gordon are the focus in an episode whose story offers some surprising twists.

Prisoners flips back and forth between the experiences of Penguin as he continues to settle in at the Van Dahl residence, and gets more acquainted with his father and the others that occupy it, and Gordon’s adjustment to prison life as he serves time at Blackgate.

The Van Dahl mansion is an over-the-top depiction of classic, gothic British murder mystery/horror story tropes done in such a heavy handed manner as to almost be comical, reminding us this is a series based on a comic book reality, and that this sort of thing should be expected. Likewise, meanwhile, in the big house, a kinder, gentler portrayal of prison cliches we have seen before serve as the setting for Gordon doing time while he serves his sentence.

The episode begins with a depiction of Gordon experiencing the mind-numbing repetition of  routine days in Blackgate Penitentiary. Days that repeat without change. He stoically endures without complaint, but it is implicit it is taking its toll on him psychologically.

This comes to an abrupt end when he is suddenly transferred from protective custody to the menacing F-wing of the prison, nicknamed “world’s end”. He is informed by the warden (Ned Bellamy) that his old nemesis Commissioner Loeb had a hand in the sudden shift in his fortune. To add to his life’s downward spiral, he receives tragic news from Bullock when he visits that Lee has lost the baby they were expecting, and has moved south away from Gotham. Bullock, in a surprising development, is shown later visiting Carmine Falcone (Doman) for assistance in the matter of his former partner.

Meanwhile Penguin is getting more familiar with his father and in-laws, while learning more about the family history. His father is gravely ill with an ailment described as him having a hole in his heart that is slowly increasing in size. He has medication he is supposed to be taking for it, but his wife is substituting mints in place of the pills he should be taking. The wife and her kids make no attempt to hide their desire to prevent Elijah from making changes to his will, as he plans to do the very next day. penguin confesses his dark past to Elijah, so when the in-laws try to rat him out to Elijah it does not have the desired effect.

The actors portraying the wife (Melinda Clarke) along with her son (Justin Mark) and daughter (Kaley Ronayne) are a blend of the usual suspects from any British murder mystery ever made, minus the accents, with a touch of Addams family thrown in for good measure. It is revealed she is an ex-waitress, who has no intention of giving up the new lifestyle she has become accustomed to. They first try to use the daughter to seduce Penguin, to enlist him as an ally, and when that fails, they resort to poisoning his after dinner sherry, but their poison misses its target when Elijah drinks it instead, and it kills him by mistake. Penguin suffers the loss of yet another parent he loved.

Back in prison, Gordon is targeted by the warden for death by way of a prisoner he sends to do the dirty work. he assaults Gordon, and when another prisoner, nicknamed Puck (Peter Mark Kendall) comes to Gordon’s defense, he assaults him too, sending them both to the infirmary for their injuries.

The first attempt on his life having failed, another is scheduled to take place during movie night not long afterwards. A  guard warns Gordon to be on the lookout, but the attack takes place anyway, apparently killing Gordon when he is stabbed to death. This deadly attack turns out to be  a ruse however, when it turns out the whole thing was faked with a blood pack, and people in place to make it seem real. It turns out Bullock’s plea for help to Falcone has paid off and he pulled some strings to save Gordon’s life.

The episode ends with Gordon having escaped the prison, along with Puck who he he rescued on his way out. They succeed in escaping but Puck dies from injuries he sustained from a beating ordained by the warden. Gordon is left with the choice of leaving the country or returning to Gotham to clear his name. There’s little doubt what his decision will be. Gordon”s life has now hit bottom, as an escaped felon and the loss of his child.

This was more or less another filler episode, serving to lead up to more eventful things to come as we approach the end of the season. It doesn’t take a rocket surgeon to figure out that there’s some big events planned for the rest of the episodes that remain in season 2. Although this was not the most eventful of chapters in the story, it was still enjoyable and had some nice surprises (that were not that surprising) in it like the sudden reappearance of Falcone and Loeb still pulling strings from afar. The episode was devoid of any updates in regards to Bruce, Selina, and Alfred, or any of the other denizens of the dark city, but they are certain to return soon. Things still need to be resolved regarding  Nygma, who makes a brief appearance in the episode as the smugly satisfied, and devious sociopathic murderer who framed Gordon for the homicide he was in prison for.