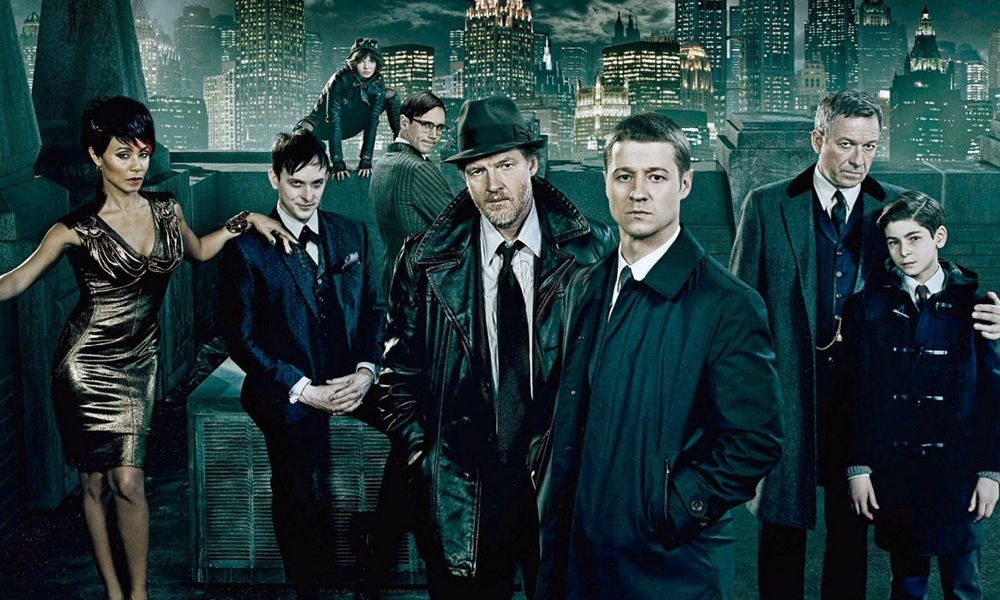 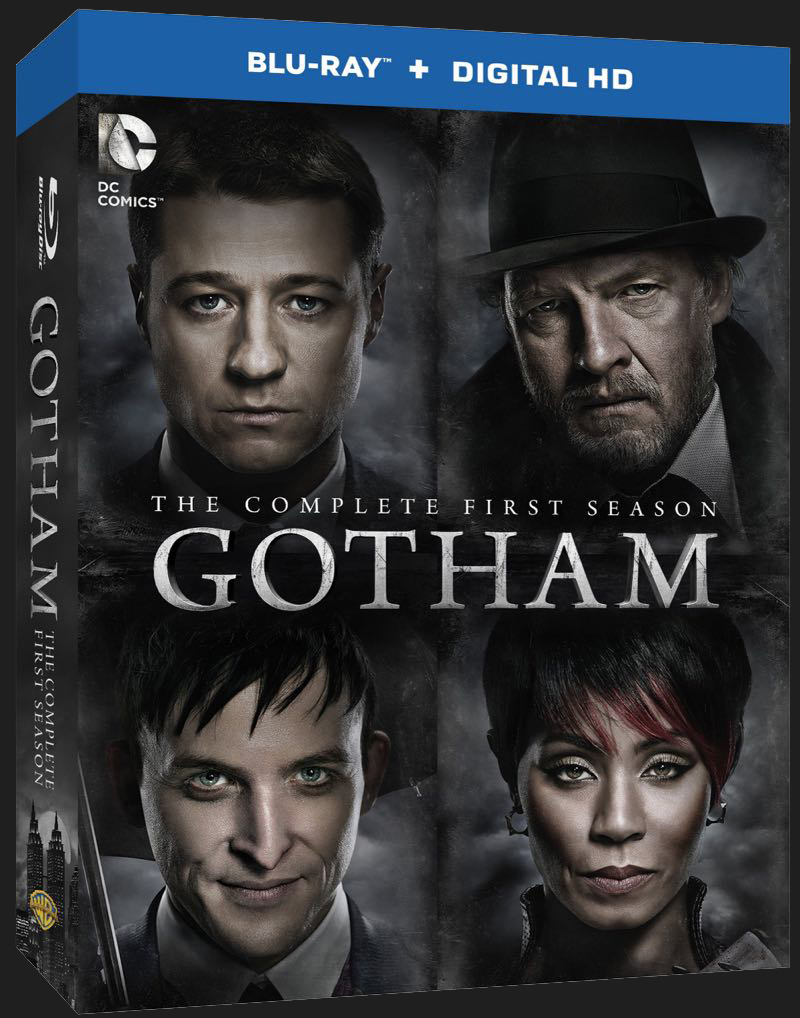 With the Blu-Ray release of the first season of Gotham, it’s the perfect time to catch up.  With so much to love and hate about this show, I cranked out some thoughts about the first few episodes. After all if they don’t hook you, nothing will. Happy viewing!

“The Pilot” was the much anticipated Gotham, the origin story of Commissioner Gordon’s rise through the Gotham City police pre Batman.

Right away, we are thrust into the story by a young, unnamed prowler, who is too obviously Selena Kyle (Carmen Bicondova). Within the first few minutes, she witnesses the murder of Bruce Wayne’s (David Mazouz) parents from an alley fire escape and things are set into motion.

Taking up the case of the Wayne murders is a young James Gordon, played by Ben McKenzie, as he is obviously already running into problems as a good cop in a bad city. Luckily, we all know he stays that way, thus having a solid main character to rely on. Slightly more colorful is his partner, Det. Harvey Bullock (Donal Logue), a bribe taking, hard hitting, alcoholic who turns out to have more layers than we think. In fact, he becomes a surprisingly intriguing character by the end of the episode.

As is customary, Pilots try to introduce as many characters are possible and create a significant and intriguing story to capture the audience right away. Probably the most anticipated character introduction  dominating the internet is that of Oswald Cobblepot, played by Robin Taylor. The challenge (as always) for these actors is bringing something new to the famous characters we have such high expectations for.  Luckily, so far, Taylor does not disappoint. He was an unsettling pleasure to watch and since we haven’t really seen the Penguin reincarnated in a while, he got our attention.

However, my favorite character in the first episode of Gotham is the city, itself. Solid cinematography and art direction bring to life the colorful chalk drawing-esque buildings and street scenes, with well detailed sets and oodles of delicious light.

I must say that, as a lifelong Batman fan who is jaded from all the pop culture superhero-palooza, Gotham is a tad refreshing. Trust me, I expected to hate it from the get-go, but found myself enjoying it as if I were reading one of the old detective comics. Give this first chapter a shot. You’ll be none the worse for doing so.

Alright, I’m beginning to get a little scared with the fact that I’m kind of liking this series so far. “Selina Kyle” picks up right where the Pilot left off with heros and villains coming in and out of the shadows in the cold, but colorful Gotham.

This time, the driving plot centers around a mysterious international trafficking circle preying on young street kids. Lili Taylor guest stars as Patti, one of the minions sent in to abduct the forsaken children by the numbers. The investigation takes Jim Gordon (Ben McKenzie) and Harvey Bullock (Donal Logue) back to Fish Mooney (Jada Pinkett Smith), who is now in hot water with Falcone (John Doman). Smith really stretches her character’s legs in this episode, making Fish all her own.

Meanwhile, Oswald Cobblepot (Robin Lord Taylor) resurfaces in the country and bides his time while leaving a messy trail of blood on his path back to Gotham. I tried to watch Taylor with a more critical eye this time. However, despite that, I once again ended up delighted by his performance and completely believing in his character. I think it’s safe to say that, yes, he really is that good. I mean, when you have Carole King guest starring as your crazy mother, you must be doing something right, acting-wise.

Ben McKenzie is holding his own pretty well as The O.C’s Ryan fades away. He has an entertaining dynamic with Logue’s Bullock, who we still can’t place as good or bad. For now, we’ll just say he’s awesomely gray. There’s a ton more good character going on both the police station and Wayne manor. It’s interesting watching young Bruce Wayne, played in a refreshing subtleness by David Mazouz. He is, by no means, overly angry or over the top and almost plays the character as if he has no idea who Batman is (which is, actually, perfect). Oh yes, and Sean Pertwee still shines as Alfred.

Alright, back to the title. Young Selina Kyle (Camren Bicondova), who insists on being called “Cat”, slips and slides her way in and out of danger while on the lookout for Jim Gordon. It is only at the end that she lets him in on the secret that she clearly saw who really murdered the Waynes. Her condition for spilling the beans is that Gordon let her back on the streets. We all know where this ends up later. Or do we? In this case, the plot could go in any direction. The fact that Gotham centers around our favorite DC Comics characters definitely adds to the charm. Yet, frankly, this is just a decent show that is part film noir, part detective comic, and part nerdgasm as we watch our favorite broken city stir .

Careful, fellow Batman enthusiasts, Gotham is doing something right. This week brings us the return of Oswald Cobblepot as he squirms his way back into the deranged city he loves so much.

One of the things I’m enjoying most about this show is that each episode seems to have a mystery to solve, while slowly developing the beginnings of the larger villains. In “The Balloon Man”, a rogue vigilante is sentencing corrupt Gotham citizens to death by weather balloon. And it’s just as cool as it sounds.

As Gordon (Ben McKenzie) and Bullock (Donal Logue) trail the Balloon Man (Dan Bekkedahl), Oswald Cobblepot (Robin Lord Taylor) lands himself a restaurant dishwashing gig and winds up close to Sal Maroni (David Zayas), an influential figure in the city’s shadowed world of crime. The young Penguin is biding his time, patiently, and not afraid to work (and slash) his way up the ladder (probably the ladder of turning Gotham into HIS series).

Meanwhile, a young Bruce Wayne (David Mazouz) sits in the shadows with the police reports of his parents’ murders. He refuses to eat or allow himself to be distracted… until he starts watching the Balloon Man coverage. It’s a small moment, but all of a sudden, Bruce seems to have a realization that he has to keep himself strong. Unlike other Gotham critics, I have no complaints about David Mazouz, thus far. He is playing Bruce very subdued, without taking away from what the main focus of the series is. We all know what his character becomes, but the most important thing this young actor has to convince us of is that HE doesn’t.

On the other side of the troubled child tracks, Selina (Camren Bicondova) leads Gordon to the site of the Wayne murders and is able to prove she was there that night and saw the true killer. The problem is she escapes his custody before he can extract anymore answers. But we all knew that was coming.

By the episodes close, Gordon’s Cobblepot ordeal is all but closing in on him. Trapped in a giant gray area, he can’t come completely clean with the other cops, the crime lords, or even his girlfriend. Thankfully, that all changes with a knock on Gordon’s front door and the end scene cuts right where you want it to.

Three episodes in and Gotham is delicately drawing us in with its bleak, yet intoxicating aura. Like its inhabitants, we just can’t resist the allure of the beautiful “sickness” and the desire to be caught in the web of good and evil.

This week’s “Arkham” picked up directly where the story left off with Oswald Cobblepot (Robin Lord Taylor) at Gordon’s (Ben McKenzie) door. The future Penguin pleads for the man who saved his life to trust him and spends the rest of the episode “assisting” him in capturing a pro hitman, who is after the mayor (Richard Kind). I’ll be the first to admit it’s difficult to take Richard Kind seriously as the mayor of Gotham. However, despite that, “Arkham” is well-paced and has some good content, as Gotham’s rival crime lords fight for control of the chilling asylum grounds.

It’s still great fun to watch Robin Lord Taylor’s Cobblepot work his way up the ladder, in both his restaurant job and the city’s underworld. Using his wormy naïve persona as a weapon, he is able to slip slide his way though his enemies, making/ using some friends along the way.

On the flip side of the future Batman villains, Edward Nygma (Cory Michael Smith) gets more screen time this episode. I don’t know exactly how much we’re going to see his character develop in the future, but right now he’s tapping way too much into the Jim Carrey-esque Nygma from Batman Forever. Unlike Cobblepot, we seem to be getting nothing more than an obvious imitation from Smith instead of making the character his own.

Quickly getting buried in his own secrets, Gordon is losing Barbara (Erin Richards) by refusing to share information with her about Oswald Cobblepot. However, he’s still building a relationship with Bruce Wayne (David Mazouz) and Alfred (Sean Pertwee), developing Bruce’s future standpoint that Gotham City is worth saving.

The tone of the series gets a bit darker with Fish Mooney (Jada Pinkett Smith) searching for an apprentice. She establishes her dark side by forcing her two female finalists to literally fight for the position. It’s a raw, brutal scene and the weaker girl ends up in a bloody pulp. To all the Jada haters, she’s really not doing a bad job. She’s acting like a classic villain. Try picturing her character in a comic book and don’t give up on her just yet.

It’s definitely nerd-ily refreshing hear the words “Arkham Asylum” being thrown about. I feel as though it’s time for Gotham to begin letting go of its training wheels. The series has all the goods to stand on its own as a creepy crime show with an element of famous comic book fiction. It just needs to trust itself and not pine over the crowd-pleasing bits.

Moving on Bat-fans… can I Bat-binge watch in time for the premiere?

Special Features on the Blu-ray:

“This Is Gotham” is a preview of the special features on the first season Blu-rays.