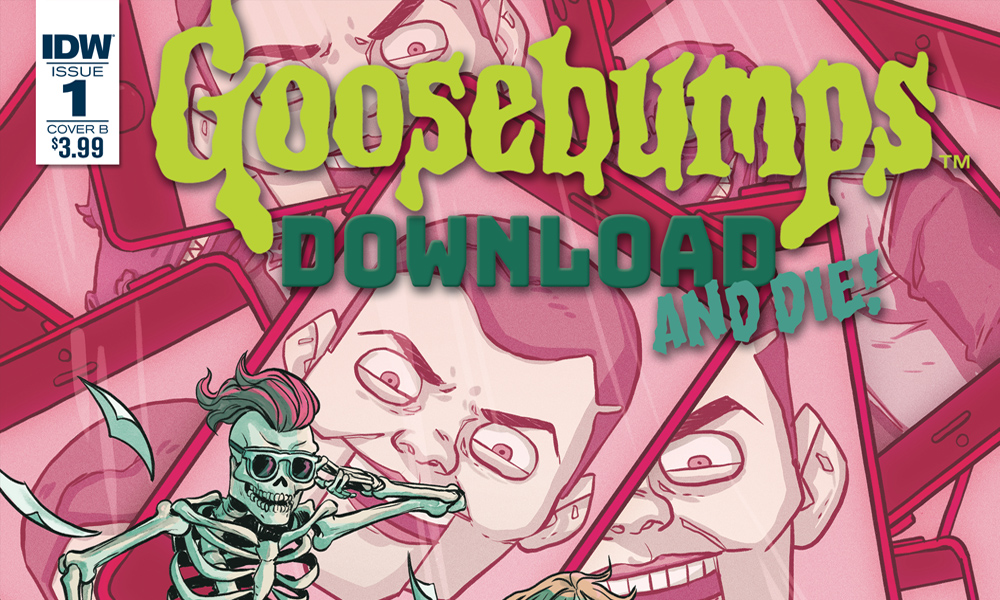 Proudly promoted by “IDW Publishing” as “the second three-issue arc in R.L Stine’s Goosebumps comic series”, this opening instalment to “Download And Die!” wastes little time in bringing the narrative’s leading cast together and providing the three schoolgirls with plenty of characterisation and adolescent angst. In fact initially, Jen Vaughn’s plot for this twenty-page periodical appears to realistically replicate all the peer-pressures found within a typical learning institution’s wall-locker filled corridor, and if anything actually wrong-foots the reader by arguably implying that newcomer Flips1101101, a ‘celebrity’ from the Travellers Of The Frost leaderboard, is possibly going to be the ‘one to watch’ within the Oklahoma-born writer’s storyline.

Enjoyably however, this book’s creator doesn’t simply follow the all-too obvious pathway followed by the likes of Kevin Williamson’s 1998 American science fiction teen horror film “The Faculty”, and instead soon makes it clear that the focus of her story will be Merhdad’s sister, Mitra, rather than the so-called ‘friend-stealing’ Amanda Sneeds. This focus really helps bring Kyra’s somewhat jealous pal to the forefront of the story, and her increasing frustration at the fact that her best mate goes to the mall, “then a movie” and even runs into Weather, a girl Mitra clearly has a crush upon, all without her, provides plenty of rationalisation as to why she later foolishly utilises a mysterious state-of-the-art telephone which someone has suspiciously sent her without asking; “You’re not still angry about me going to the movies with Flips, are you?”

Of course, as far as the smartphone is concerned, all the warnings are there to be seen by the reader, and few in this comic’s audience probably needed Steelbreaker to voice her well-founded cautionary advice for her buddy to tell her parents about the unsolicited gift. Even so, Mitra’s unwise decision to post her school’s unfriendly “dumb computer hogs…” onto social media using some of the Deadroom application’s vomiting stickers still proves a somewhat engaging spate of storytelling, despite the fact that the boys becoming stomach-churningly ill a short time later comes as no surprise whatsoever.

Quite possibly this book’s greatest asset though is Michelle Wong’s clean-lined and somewhat cartoony-looking artwork. Competently pencilled, and easy upon the eyes with more than a hint of Manga, especially when pencilling the “three musketeers” whilst playing their ‘dungeons and dragons’ computer game, it’s clear from this magazine’s storyboarding that the Hong Kong artist does indeed “love drawing cute characters… and monsters”.