Goosebumps is based upon R.L. Stine’s long-running and mega-popular series of juvenile horror books that also spawned a TV series. The film isn’t just based on Stine’s books but features Jack Black actually playing R.L. Stine in a plot about the writer’s stories rather than adapting any particular book. 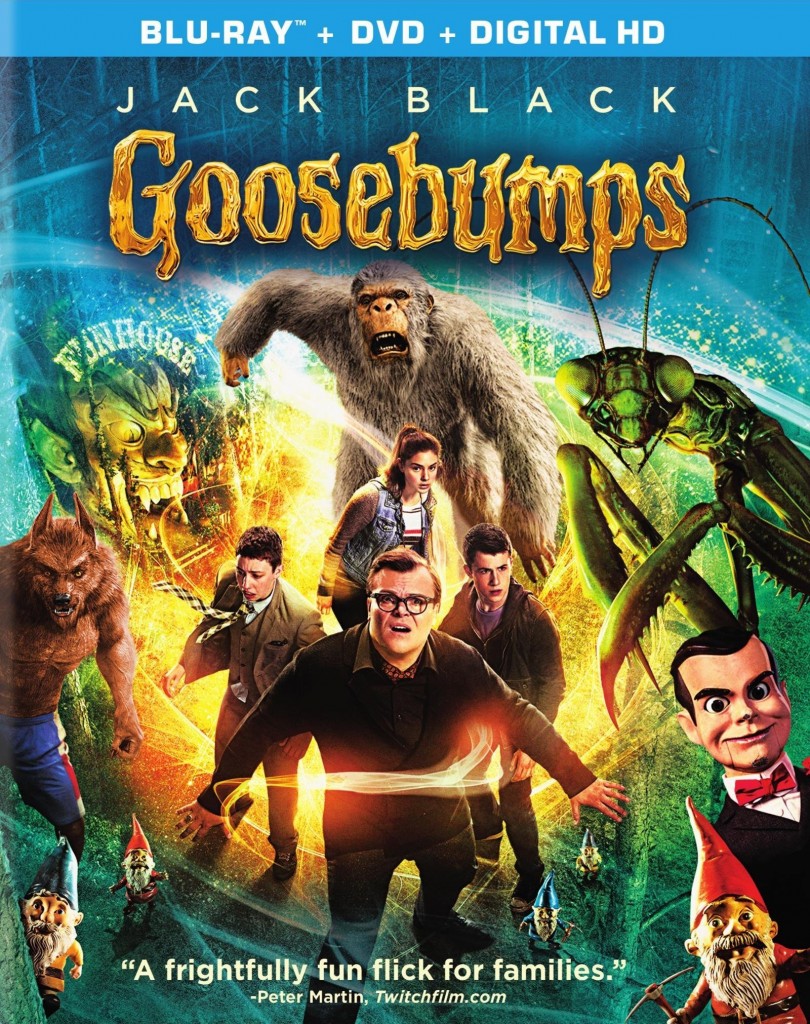 Zach Cooper (Minnette) and his mother Gale (Ryan) move from New York City to the small town of Madison, Delaware. Zach meets his next door neighbor and fellow teenager Hannah (rush) and her overly protective father known to the neighborhood kids as “Mr. Shivers”.

Zach becomes worried about Hannah when she hears her arguing with her father. He and his friend, Champ, sneak into her house to see if she is ok. Inside they find a bookshelf full of original Goosebumps manuscripts which are all curiously padlocked. The boys discover that Mr. Shivers is actually R.L. Stine. The boys accidentally open one of the books The Abominable Snowman of Pasadena, and release a real, live yeti! Hannah explains that her father created his stories as a child to cope with severe bullying, but the monsters came to life, so he had to trap them inside their manuscripts.

With Stine’s help the boys eventually trap the yeti back inside of his book but the group is confronted by Slappy, the ventriloquist dummy from Night of the Living Dummy who is angry at Stine for imprisoning him in the book. Slappy burns his book along with several other manuscripts, bringing to life such well known Stine monsters as the evil lawn gnomes from Revenge of the Lawn Gnomes, the giant praying mantis from A Shocker on Shock Street, the werewolf from The Werewolf of Fever Swamp, and many more.

With hordes of monsters released on the town of Madison and their books burned, Stine and the kids have to reach the local high school where his original typewriter is on display so he can create an all-new story and trap all of the monsters in the new manuscript.

I’ve always had a soft spot for goosebumps, both the books and the TV show as they reminded me of the kind of ghost and monster stories I read as a kid. I think they served as an introduction to horror for a lot of children. For fans of the books the film is a treasure trove of Easter eggs as dozens of Stine’s books show up in the film in one fashion or another but you have to be eagle-eyed to catch a lot of them.

Goosebumps does play like a big screen version of the TV series but obviously with far better visual effects. The digitally created monsters mix well with the live action characters and make for some uproarious and heart-pounding scenes although they are never too intense for younger viewers so it is definitely family friendly. For Black, whose recent films have been less than box office gold, it was a needed shot in the arm as the film earned nearly three times its $58 million dollar budget.

Goosebumps doesn’t present anything all that original or amazing but it does what you would expect in bringing the works of R.L. Stine to life and mixing it with a good deal of humor and fun.

Alternate Opening
Deleted Scenes
Blooper Reel
Beginner’s guide to surviving a Goosebumps creature – Zach and Champ give tips on how to survive being chased by creatures in the film.
All about Slappy – This takes a look at one of the puppets featured in the film.
Cast Screen Test Gallery – Pretty self-explanatory as we see early test screening clips of some of the actors in the film.
Strange Things Are happening…On Set – This features the actor that played Zach discussing some on-set mishaps.
Creaturefield – This takes a look at the creatures and the guys who helped design them. It also gives pointers for creating some on your own.