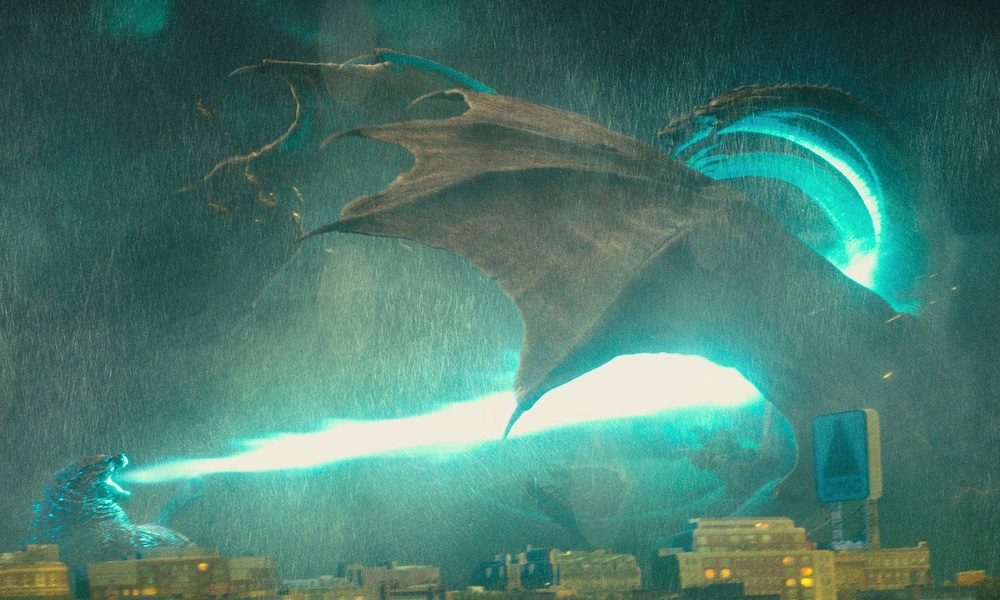 How much are you willing to suffer through in order to get to the good stuff? The new Godzilla move makes an excellent litmus test for such a question. It’s no secret what kind of thrills this movie lives and dies on. Honestly, they could just show Godzilla fighting monsters for 135 minutes and their duty to the fans would be complete. Godzilla: King of the Monsters devotes an earnest 45 minutes to the stated goal… and another 90 on dull-as-dishwater human characters who stare into computers and say things like “this changes everything.” That, in the end, is the only equation that matters when it comes to seeing this film. Can you tolerate the 90 to get the 45? If you can, Toho’s most famous creation and his buddies will oblige. Otherwise, this King falls distressingly short of the crown.

It’s doubly complicated because Godzilla was made for the big screen, which means waiting for video is not recommended. No matter how large the domestic monitor or sophisticated the sound system, something essential about the beast gets lost in the home viewing experience. The sheer sense of spectacle – the worms’ eye view of titanic behemoths throwing down amid what used to be a thriving metropolis – requires the IMAX treatment, and with similar blockbusters lining up for the sexy spots at your local multiplex, that won’t last long. Whatever worth this film holds,  it requires a viewing platform as big as its protagonist.

King of the Monsters finds its stride when it takes full advantage of that spectacle: when Godzilla and his dancing partner du jour eye each other over glowing piles of former skyscrapers and commence with the bum rush. And it was a smart move to bring in some of his supporting monsters like Rodan and Mothra. They make their entrances with suitable gravitas and – in the case of King Ghidorah, an interloper from outer space intent on killing Godzilla and “claiming” the Earth for his own – provide suitably impressive antagonists for a periodically cool monster mash.

The key word there is “periodically”, for those glorious pieces of summertime CG arrive amid great stretches of dead air. The script attempts to conjure human characters out of actors far too good for the material. Yet even the likes of Verma Farmiga, Charles Dance and Ken Watanabe stand powerless before screenplay’s breathtaking array of pointless clichés and boring dramatic complications.  Kong of the Monsters makes frantic efforts to justify their presence: everything from monster-attracting gizmos “falling into the wrong hands” to a marriage on the skids because Godzilla stomped on their baby. None of it makes so much as a ripple, and indeed considering the talent onscreen, the sheer waste of those scenes becomes positively criminal.

Even worse, the movie falls victim to one of the most terrible dangers of franchise filmmaking: serving as a placeholder for the later movie people really want to see. Every scene reeks of it, and the not-so-veiled references to what’s coming do a fair amount of damage to what is. That, too, constitutes a waste. Godzilla’s supporting crew collectively carries more than enough cinematic juice to make a movie like this loads of fun. Instead, they end up fighting for time amid third-tier screenwriting clichés and wet, ungainly plot exposition delivered by a cast clearly just here for the payday.

That proves a supremely depressing experience, despite the fitful bursts of wall-to-wall monster action. Director Michael Dougherty has proven adept at smaller horror movies, but the needs of an event picture elude his grasp too often for comfort. The results force us to hurry up and wait for the big pay-off scenes, which can prove exceedingly frustrating. I have no doubt that Warners’ extended reboot of the venerable radioactive behemoth will recover, and they’ve certainly made bigger missteps in recent memory.  But something tells me that fans will be doing a lot of fast-forwarding once the digital media version hits, leaving a very undernourished King of the Monsters behind.

3 thought on “Godzilla: King of the Monsters — Movie Review”