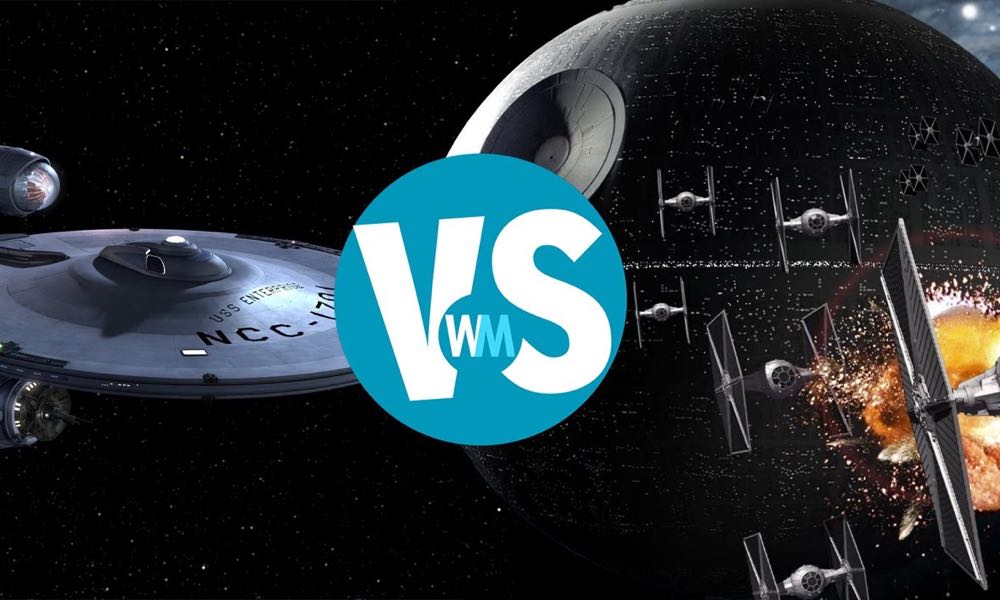 Television, as we know it, is changing. Will reality TV become the only content available on network television? It’s no secret that, for better or worse, we are currently undergoing a transition into the new reality of the digital revolution with a fundamental shift represented by a plethora of subscription streaming services competing for our time attention and monies.

Of particular note in this morass of new viewing options is the emerging competition that will take place between future live-action Star Wars series and live-action Star Trek series. This is an actual historically significant event because its the first time two major Sci-Fi franchises have gone toe to toe on television in direct competition for our favor

According to reports fans of that galaxy far away can expect a third live-action Star Wars TV show will arrive on Disney+ along with The Mandalorian and the Rogue One: A Star Wars Story Cassian Andor spinoff series. Disney is gearing up to launch Disney+ later this year, and those plans include exploiting the heck out of plenty of Star Wars content on Disney+.

The first of these is The Mandalorian TV show, which premieres when Disney+ launches on Nov. 12. The second is a Rogue One prequel focused on Cassian Andor (Diego Luna) before the events of the movie. The Rogue One prequel won’t premiere until 2021 on Disney+, but Disney and Lucasfilm have further plans for the Star Wars IP on streaming.

With the wide world of Star Wars at their fingertips, it’s unclear what exactly the third live-action Star Wars series might be. Both announced shows have connections to the movies, with The Mandalorian following after the stories of Jango and Boba Fett, while the Cassian Andor series is a direct prequel to Rogue One. As such, whatever the third series is, it’ll likely have some kind of connection to one or more of the movies.

Meanwhile, over at CBS…

In June 2018, it was announced that CBS had hired Alex Kurtzman in a five-year deal to oversee the development of a host of new shows set in the Star Trek universe. Kurtzman co-wrote 2010’s Star Trek and 2013’s Star Trek Into Darkness with his writing partner Roberto Orci. He joined Star Trek: Discovery as an executive producer early on and has stayed with the show through numerous changes in showrunner, taking on the role solo during the second season, and sharing show-running duties with Michelle Paradise for the upcoming third season.

CBS has hired Kurtzman to develop an inter-connected Star Trek universe, in the hope of attracting more subscribers to the CBS All-Access streaming channel.

STAR TREK DISCOVERY: Arguably the best science fiction series currently on TV, I am seriously looking forward to Star Trek Discovery’s third season. The season two finale was sensational stuff and I am psyched for more. Does that suit allow them to travel through time and space at will? I think it does; should be fun.

STAR TREK: PICARD This series will be the first Star Trek series to take viewers into the future of the Prime Universe, not only going beyond the most recent Next Generation adventure (Star Trek: Nemesis) but including the collapse of the Romulan Empire seen in flashforward in JJ Abrams’ Star Trek

SECTION 31 This spin-off from Star Trek: Discovery is in development, but won’t enter into production for some time, so we shouldn’t expect to see it for a while. The series will follow Starfleet’s Black Ops division, Section 31, and star Michelle Yeoh, reprising her role as formerly Empress, now Captain, Philippa Georgiou. However, Yeoh has to film season three of Discovery first. At the end of season two, her character was flung over 900 years into the future along with Burnham and a handful of other regulars. Presumably, Georgiou will somehow find her way back to the 23rd or 24th century by the end of season three, though it’s always possible that the plan is to set the Section 31 series, which may be a limited mini-series, in the 32nd century. We can safely assume all involved will remain tight-lipped about their plans until after Discovery season 3 has been released.

STAR TREK STARFLEET ACADEMY was one of the titles trademarked by CBS in late 2018, and as early as June 2018 it was suggested that the creators of Gossip Girl would be running it. There have been rumors about a new series set at Starfleet Academy every time any new Star Trek series or film has been in development, from Voyager to Enterprise, to the JJ Abrams movies, to Discovery – but the closest anything has come so far has been the scenes of Kirk joining the Academy in 2010’s Star Trek. Even the younger Spock of Discovery is already a Starfleet officer. With so many new series in development, it’s not surprising that Kurtzman and CBS have returned to this, presumably aiming at a more Young Adult audience. We haven’t heard much since that initial announcement, but it looks like this old idea may finally see the light of day.

There’s no way to know how all this will turn out but its nice to know these studios are finally all in for good quality science fiction productions and we are entering what looks like a golden age of science fiction television and that sounds good to me.