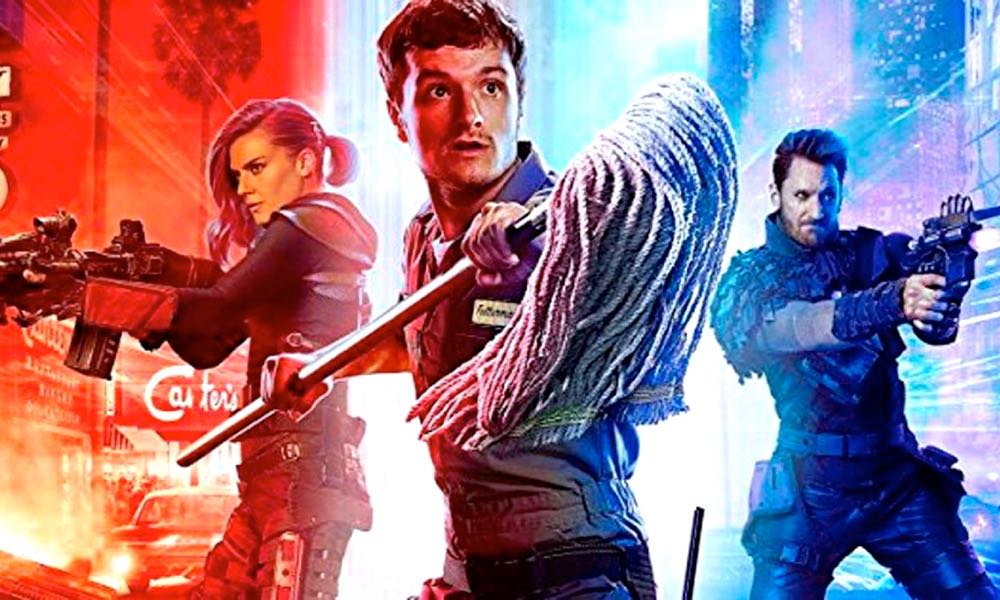 If you are fond of irreverent social satire designed to be shocking in a-not-very-serious-manner, then you will probably enjoy the first season of Future Man.  Although the irony is socially relevant, it’s strictly played for laughs here, and low humor is the weapon of choice to get the point across. Future Man is a collection of low humor, and potty mouth jokes done for the sake of doing it, It’s lewd and crude and largely reminiscent of what might happen if a twelve-year-old was given a TV series and told to do his best to shock his parents.

There are tropes and stereotypes galore in terms of the characters that populate this world, including the series titular character, Josh Futterman, a classic underachiever, who is a somewhat clueless janitor by day and a gamer by night. The premise the series narrative gets based on seems pretty familiar as well. A janitor, Josh Futturman, completes his favorite game (that was considered unbeatable), Biotic Wars, when suddenly the game’s two main characters, Tiger and Wolf, appear and recruit Josh to save the world from the real Biotic Wars. Josh and his companions travel through time to change the future and prevent the extinction of humanity. It would be more accurate to say it’s a satire of that. Future Man is a satire of almost everything from racial stereotypes to sexual relationships that unapologetically carries out its mission to offend in the crudest manner possible.

The series’ non-stop, juvenile and crude humor eventually work to get a giggle out of even the most easily offended person in the audience when supplied in a non-stop and relentless manner such as this. Pulling most of the duty to offend are the two visitors from the future Tiger (Eliza Coupe), and Wolf (Derek Wilson) whose fish-out-of-water way of seeing things is the mainstay of the series and worked to death. They come from a future where living in the sewer and eating rats is common, and where having sex has nothing to do with affection and is commonly done in front of others.

The cast somehow makes this material work with some very engaging performances by the maniacal pair of time travelers who paint a not too flattering portrait of future humanity. The pair is reminiscent of characters from both Idiocracy (2006) and Road Warrior: Fury Road (2015) but much funnier. These two are very amusing throughout and, on occasion, hilarious.

Future Man is an amusing blend of stuff we have seen before reworked into a new form that for the most part works well enough to evoke a laugh and make for an entertaining pastime. Season 2 arrived in 2019. Season 3 of the series is scheduled to arrive on April 3, 2020.