Friday the 13th: The Series The Complete Series DVD Review

Back in 1987 when I first heard about the Friday the 13th TV series my initial thoughts were, “How are they going to make a TV show out of that?” The how would soon become evident. Friday the 13th was a syndicated TV series which ran for three seasons from 1987 until 1990. After you put aside the confusion and perhaps disappointment regarding the misleading name, you found yourself an interesting little horror series. 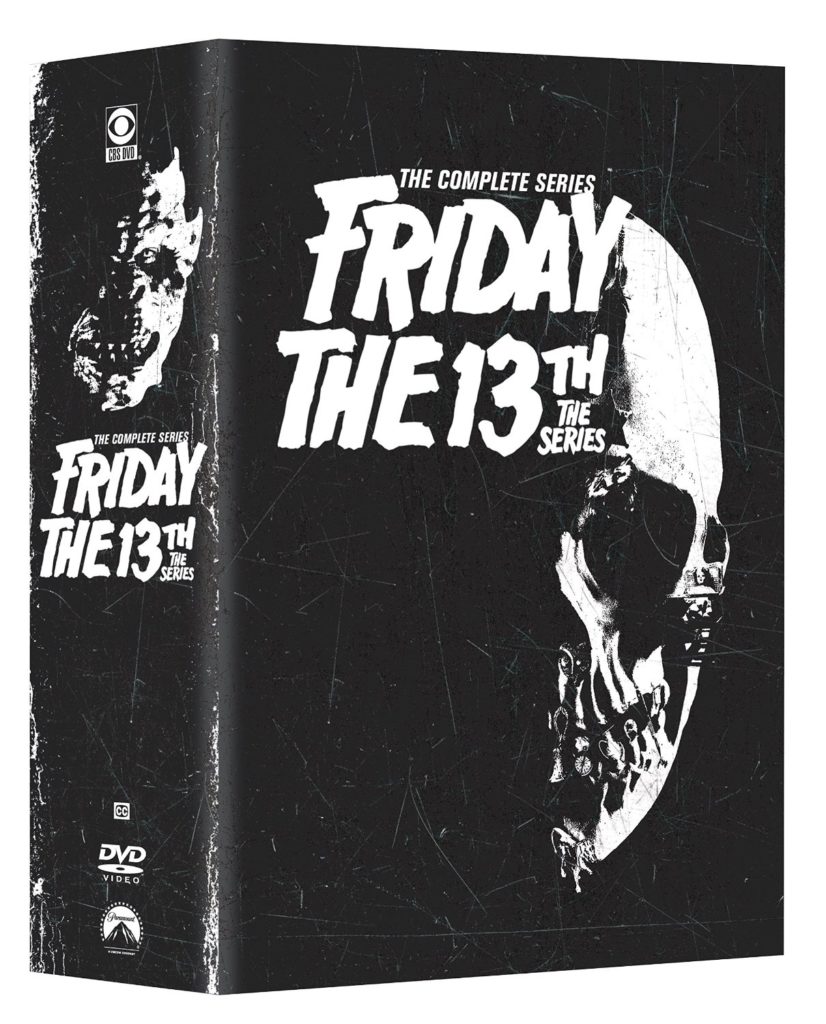 The series plot is about an antiques dealer named Lewis Vendredi, who made a deal with the Devil to sell cursed antiques out of his shop, “Vendredi’s Antiques”, in exchange for wealth and immortality. In the show’s first episode he breaks the deal and is killed by the devil who claims his soul.

After Lewis’ death, his shop is inherited by his niece, Micki Foster (played by Louise Robey who was credited under her stage name of “Robey”) and her cousin by marriage, Ryan Dallion (played by John D. LeMay). They decide not to keep the store, and unwittingly sell off many of the cursed antiques before being stopped by Lewis’ former partner Jack Marshak (played by Chris Wiggins), an expert in both the occult and antiques.

The series follows the trio as they try to locate the cursed antiques and seal them away in a vault underneath the antique store. Micki and Ryan clash throughout the series often with Jack playing referee. Micki is a beautiful but snobbish woman who initially wants no part of the business. Ryan, on the other hand was very enthusiastic about owning and running the shop. While not exactly the heroic type Ryan nonetheless puts himself in danger to recover the artifacts and to protect Micki.

Jack acts as the father figure and expert advisor on the cursed items. A former stage magician, he served in World War II and spent time in a German concentration camp. In the third season Johnny Ventura, a young roustabout and trouble maker, joins the cast. Frankly this character was always very annoying and I never could figure out the need for his addition to the cast.

While produced on an obvious small budget the series provided better than expected special effects and had its moments of outstanding horror and for the 1980s it often pushed the limits of content for a TV show. All manner of crazy, cursed objects were used on the show such as cursed rings, comic books, garden mulchers, Tattoo needles, a baby crib, and a pool stick.

Even below it followed a straight formula for most of its 72 episodes the series displayed a good deal of clever writing to keep things fresh. Unfortunately the series was abruptly canceled about ¾ through its third season and no further episodes were produced. Thus a lot of plot elements were left unresolved. While its run ended 36 years ago, you can see influences of Friday the 13th: The Series in modern shows such as “Reaper” and “Warehouse 13”.

The only extras in the set are some promotional ads from the period. Also, from a technical standpoint the set is bargain basement. The packaging his cheap, the art is cheap and the video looks like it hasn’t been cleaned up at all which is disappointing.