Zombies, vampires, werewolves, aliens? Bob Odenkirk, Keegan-Michael Key, Patton Oswalt, Dennis Leary, Vanessa Hudgens, Joan Cusack? All this…in one movie? It has to be great, right? Well hold on there, cowboy. Something funny happened on the way to the roundup. Freaks of Nature is a horror/comedy that on the outside looks like an instant, small budget classic but like cheap Easter candy, it doesn’t taste so great once you bite inside. 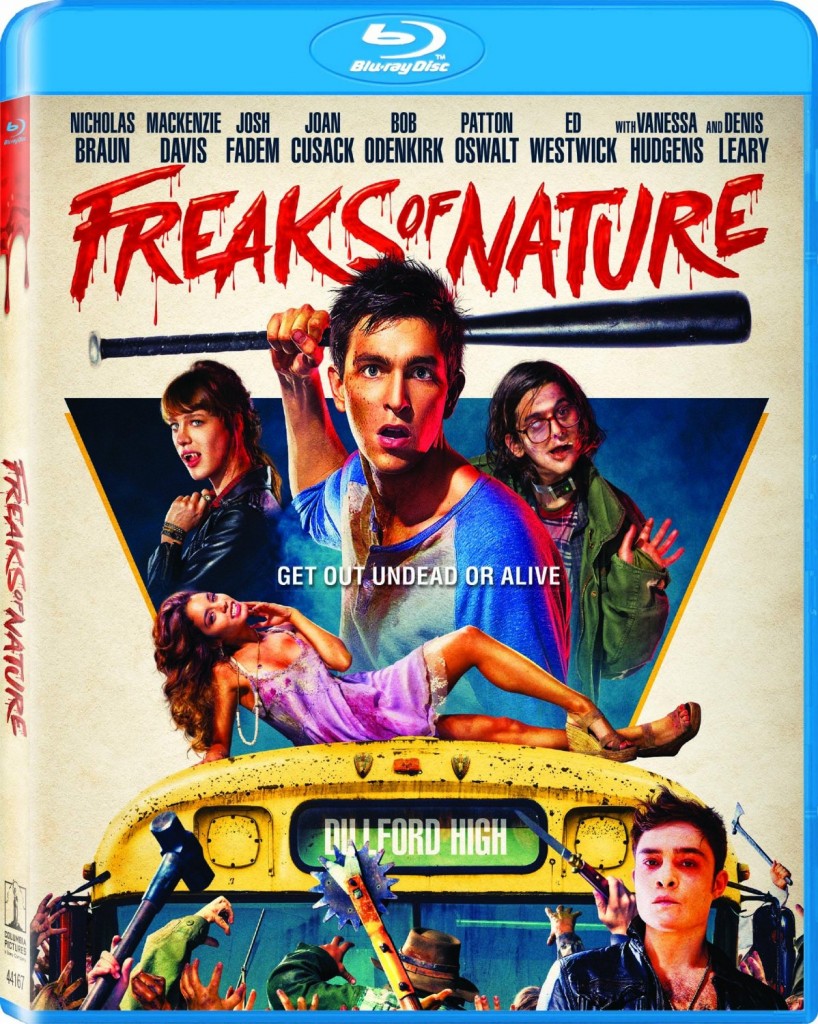 In the small town of Dillford, humans live, work, and even go to school side-by-side with vampires and zombies. There is a relative truce between the three groups (insured by a collar that prevents the zombies from attacking humans in line at the school cafeteria) although they mingle little.

Dag Parker (Braun) is the jock baseball player who is in love with the school hottie Lorelei (Hudgens). Petra (Davis) is a pretty, shy girl who pines for a handsome vampire who uses her, and then discards her, but not before turning her into a vampire. Ned (Fadem) is a brilliant student who is unappreciated at home by his sports-loving father who gives all his love to Ned’s older, athletic brother. Despondent, Ned allows himself to be bitten by a zombie, becoming a member of the living dead.

The town becomes a powder keg of anger and resentment with the arrival of a race of aliens. The humans, zombies, and vampires all accuse each other of bringing the aliens to their town to wipe out the other groups. But in reality the aliens have arrived for a much different and sillier reason. They want to get at the town’s formed riblet factory owned by Rick Wilson (Leary), the richest man in town. Now the various groups, along with the three friends, have to put aside their differences and their cravings to join together to defeat the aliens and restore balance to the town of Dillford.

Freaks of Nature has its moments and some of those are true, hilarious gems. One of those is Keegan-Michael Key’s (who plays a teacher at the high school) epic rant about all the donuts being gone in the teacher’s lounge. Leary is his usual fast-talking, smarmy self, Odenkirk and Cusack are a hoot as Dag’s pot-smoking hippy parents. In fact when these characters along with Patton Oswalt are onscreen the film is at its best.

Unfortunately the bulk of the film concentrates on the three young leads and they are not nearly as interesting or as fun to watch. Even worse, the film all but forgets that it is supposed to be a comedy and instead stagnates on overly melodramatic tension between the three. It doesn’t work in the least and every time the film starts to pick up momentum, these three bring the action to a grinding halt.

The ideal way to watch the film would be with your hand on the fast forward button, stopping when Key, Leary, Odenkirk, and Oswalt are on screen and skipping through when they are not.