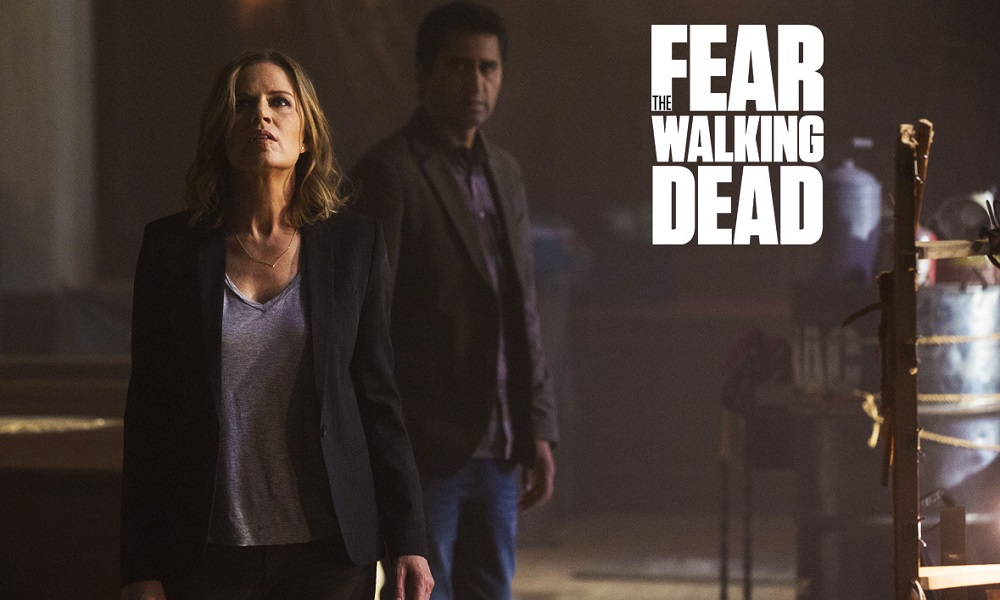 If you want me to “fear” the walking dead it might be nice, actually, to have some walking dead.  Fear The Walking Dead, the long awaited spinoff/prequel to The Walking Dead debuted last night to a chorus of snores.  Unlike The Walking Dead which tossed us ankle deep into zombies with Rick Grimes waking up in an abandoned hospital with no clue about the catastrophe that has struck the world, Fear’s strategy seems to be to ease itself into the undead fray with Lifetime channel style drama.  Without the first five minutes this could have easily been one of those old after school specials about a drug-addicted teen and the affect his situation has on his family.

Set in Los Angeles, Nick Clark (Dillane), college dropout and heroin addict, wakes in a rundown old church where he and other junkies go to use their drugs.  He finds his friend Gloria making a meal out of another addict and flees into the streets where he is struck by a car.  He winds up in the hospital surrounded by the most one-dimensionally dysfunctional family we’ve seen in a long time.  Mother Madison (Dickens) is a high school guidance counselor, her fiancé Travis (Curtis) is a math teacher at the same school, and self-absorbed sister Alicia (Debnam-Carey) is the perfect student with the great grades…who goes to the SAME school.  Convenient.  Divorcee Travis is estranged from his own high school-aged son who resents his dad for splitting up with his mom.  The first 45 minutes is largely spent with the cops and family berating Nick for once again failing in his attempt to get clean and dismiss his talk of people eating people as the ramblings of an addict who shot up a bad dose.  Nick escapes the hospital and makes contact with his dealer, Cam, leading to a deadly confrontation.

Look, I have no doubt at all that Fear the Walking Dead is going to pull huge numbers for AMC once they come in.  That makes the pilot all the more disappointing.  Even before the debut, the series was already picked up for a full second season of 15 episodes.  There appeared to be no urgency to get the series off to a strong start even though the first season is only six episodes long.  They have the kind of security blanket that the original series lacked.  Complacency is not a good way to start a new series no matter how much confidence you have in its success.

Part of what made the characters of the original series so appealing is that we knew so little of their background.  Some were developed as the series

went on but the fact is that many of them…Shane, Dale, Andrea, T-Dog, all died without our knowing much about them.  Even now, little is known about characters like Eugene, Rosita, and Tara.  It’s almost like they are saying don’t get too close to these characters because they won’t be around long.

On the other hand I already know more about the Clark family than I want.  And what I know isn’t likeable.  There will, of course, be other characters added to the story and we got a glimpse of them in the preview after last night’s debut.  But this was not the homerun that Walking Dead fans were hoping for.  Five minutes of zombies and hour and 25 minutes of family angst…On the contrary, this was more like a pop out in foul territory.  On the other hand, the show can go nowhere but up, right?