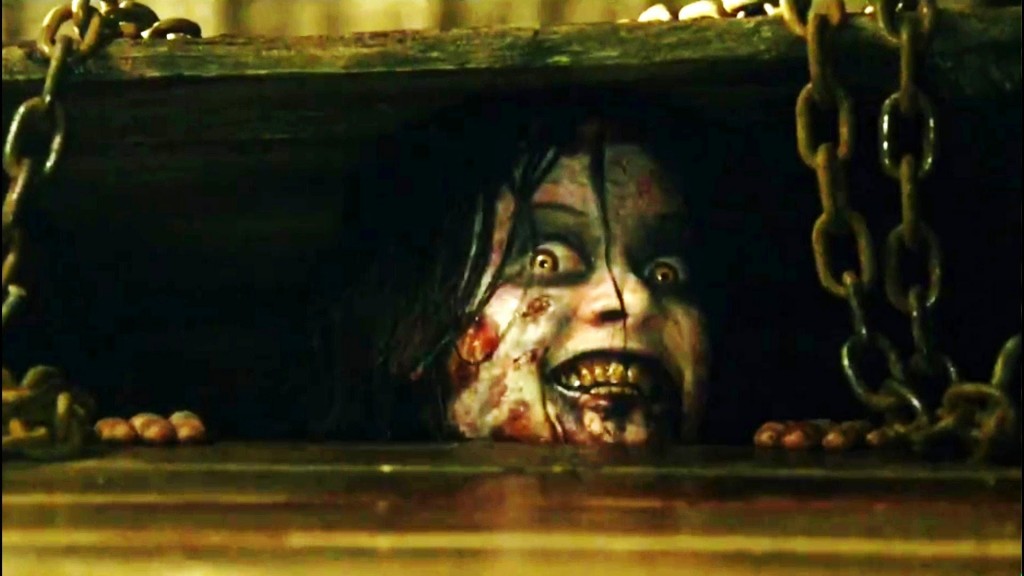 Some thirty years ago, a young unknown filmmaker named Sam Raimi had an idea for a movie about five people in a remote cabin who would become possessed by demons and start to kill each other off. Many young filmmakers have broken into the business by making a splash with horror films, and Raimi has gone on to a strong career. That movie was the 1981 Evil Dead.

Now in 2013 some filmmakers (including Raimi and his star Bruce Campbell, who are among the producers) decided that what we needed was not an original horror movie, like last year’s similar and far superior Cabin in the Woods, but a remake. As with remakes of movies like Halloween and Nightmare on Elm Street and Night of the Living Dead, it is a curio. It’s interesting to compare how effects or acting styles have changed, but for a film about demonic possession it is surprisingly soulless.

The premise is that five young people have gone to a remote cabin.

Mia (Jane Levy) is a drug addict and has asked her brother David (Shiloh Fernandez) and some friends to help her go cold turkey. She complains about weird smells and they discover a bunch of dead animals and a strange book in the cellar. Now if you found a book bound in human skin and wrapped up with barbed wire, with warnings on nearly every page, would you start trying to translate it? Eric (Lou Taylor Pucci) does, and soon strange things start to happen.

Since the movie is essentially a gore fest, there’s no need to go on about the plot or acting.

This is a movie in which no less than three arms get dismembered, a character goes berserk with a nail gun, and a woman is beaten to death with part of a broken toilet (after she’s been drenched in blood vomited on her). This doesn’t even get us to the climactic showdown involving a chainsaw. We know and care little about these characters once things get underway so often the reaction isn’t fright but, “Ooh that must hurt.”

When Raimi got money to do the sequels Evil Dead II (essentially a remake) and Army of Darkness he mixed the horror with a healthy dose of humor. The frights were real but the screams were mixed with laughs. This new version is a pretty humorless enterprise except for a quick cameo after the closing credits (and, no, it’s not Samuel L. Jackson inviting the survivor to join The Avengers).